Today's post will focus on the tickets for "Great Moments with Mr. Lincoln". Maybe this can send some good will to the "powers that be" and we can see Mr. Lincoln come alive again soon.

It's always best to start at the beginning, so here it is. From Jed's great Blog "Vintage Disneyland Goodies" (link) here is the ticket to the grand opening on August 6, 1965. What a grand event that must have been. 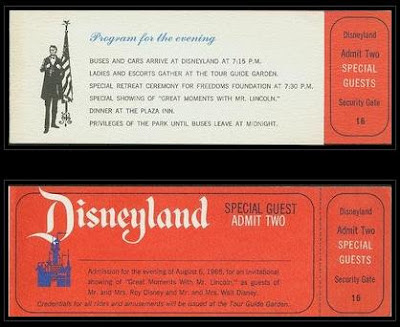 Walt wanted the Mr. Lincoln attraction to be free for Children 17 and under. You will see those special tickets below. This 1965 "E" ticket was for adults to see the attraction, but not for free. This is the only "E" ticket with Mr. Lincoln and the Flying Saucers on the same ticket. Mr. Lincoln would move to the "D" ticket in 1967 (only on adult tickets, kids were still free) and the Flying Saucers would fly away for good to make room for the New Tomorrowland 67.

For those 17 and under not purchasing at ticket book, you still got a free ticket for the Mr. Lincoln attraction with your General Admission ticket. 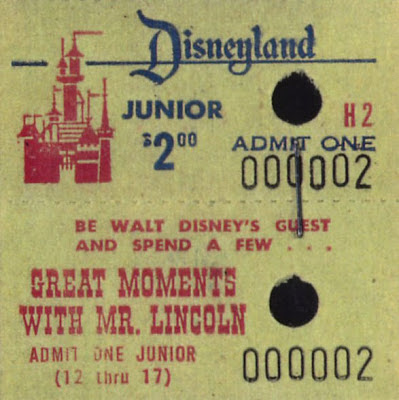 Included with the Child and Junior ticket books from Late 1966 thru around 1973 were these special tickets just behind the blue "welcome message" and above the A thru E tickets. This great Junior "Castle & Star" ticket is from late 1966 or early 1967. 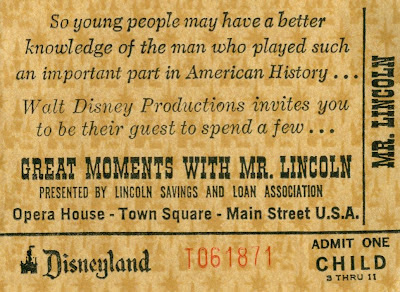 From the early 1970's, this was from a special Jiminy Cricket Ticket Book. Neat font, dig the green print too! 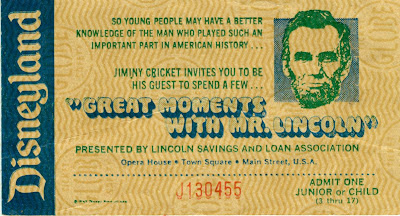 Back of the Special Jiminy Cricket Ticket book.

In 1974 the ticket books got smaller and the special Lincoln tickets went away. They were replaced with these little yellow message sheets in the place as the old ticket. These are not tickets and are not perforated. Gulf has replaced Lincoln Savings & Loan as the presenter. This must be when the added the show about Walt, hey wait, was Mr. Lincoln still in the show??? I never noticed that Mr. Lincoln was missing from these early little notices until this post. 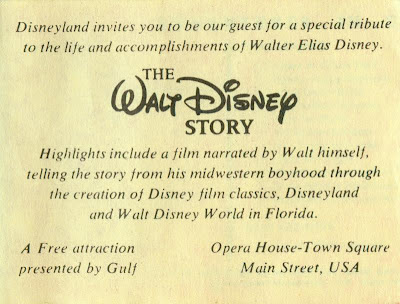 From June 1978, now Featuring Great Moments with Mr. Lincoln, how long was he gone? 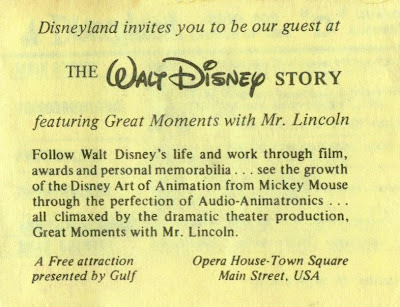 By 1979 they little yellow sheet disappears altogether. The invitation to see the free Mr. Lincoln show is combined with the "Welcome" message on the blue sheet. This is from 1980 and had the special "25" logo added to it. 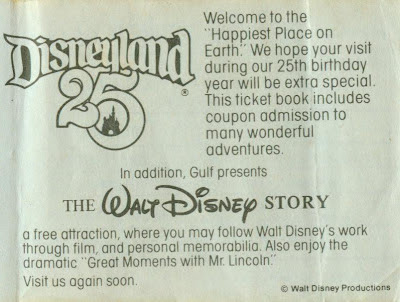 And from 1981, last of the line for the "Welcome" message, the Mr. Lincoln invite, and the lettered tickets....

Saturday: A lesson on how to take great pictures at Disneyland in 1956!
Posted by Vintage Disneyland Tickets at 12:01 AM

In the late 1990s (1999, I think) the Attractions people came up with "tickets" for Lincoln to be handed out at other Main Street attractions. Obviously they weren't required for admission--just to remind people that it was there! One day I can dig them out of storage...

I love to see one! Hey I was going to use your "Lincoln" photo for this post, but I didn't want to seem like I was snagging your profile pic! LOL!!!