Knott's Berry Farm - Before & After part 1

A strange thing happened last week on my way to the Park, I got diverted to the Farm. It just seemed like a trip to Knott’s Berry Farm was over due, so I did the unthinkable and bailed on Disneyland and went to the farm. 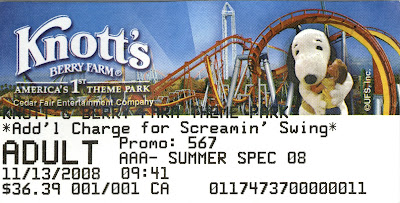 Since I was able to find so much Vintage Knott’s, we’ll break down these Before & After segments into a few posts. So let’s get started, keep in mind I didn’t have any of these before photos with me at the time, but that said, you’ll get a good idea of what remains.

The Chicken Dinner Restaurant from a 1960 guide book. 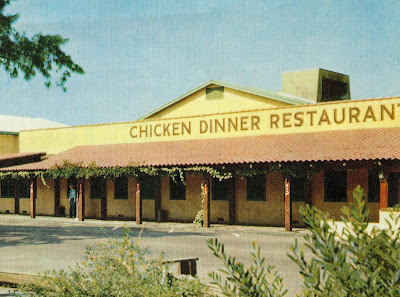 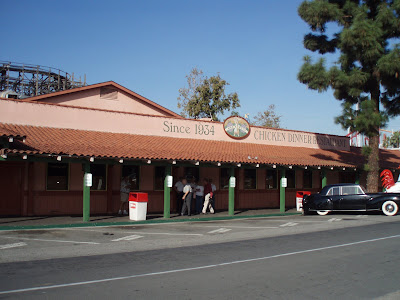 One of the entrances as seen in this April 1958 from Daveland. 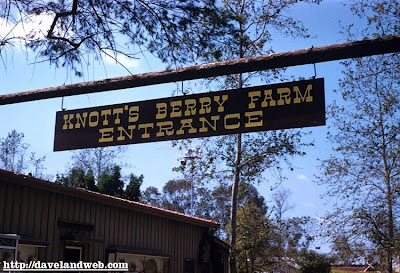 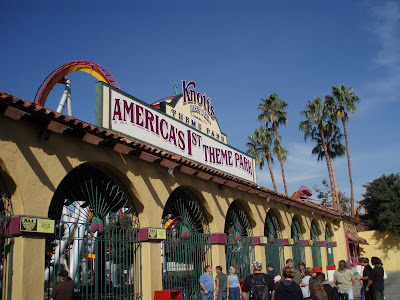 Entrance to Ghost Town in July 1961, thanks Daveland. 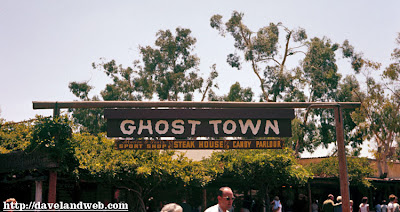 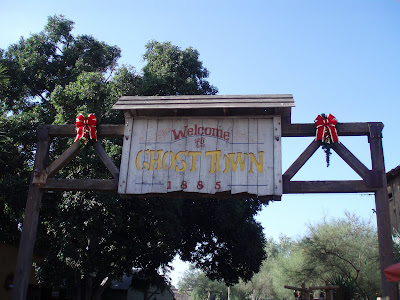 The Gold Trails Hotel in an old black and white postcard. 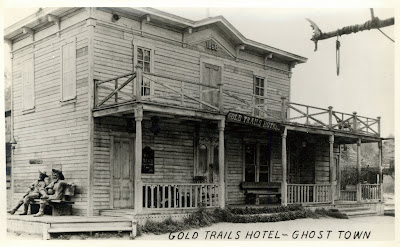 The Gold Trails Hotel today looks very much the same. 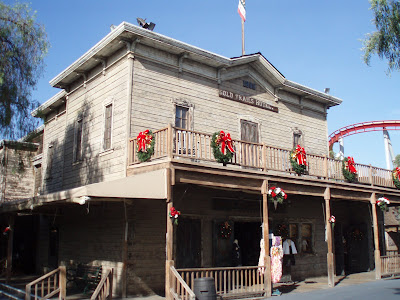 Goldie’s Joint from an old postcard. 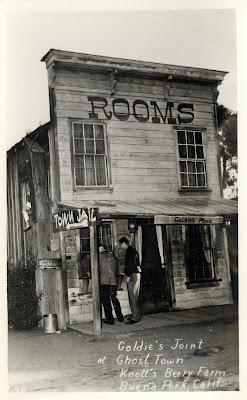 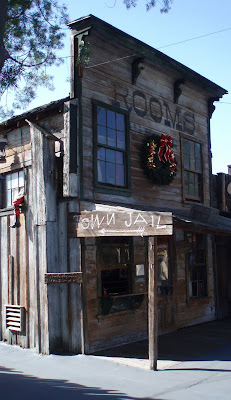 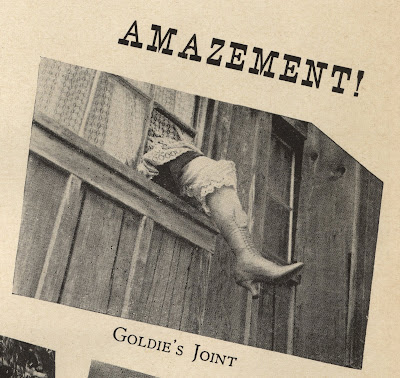 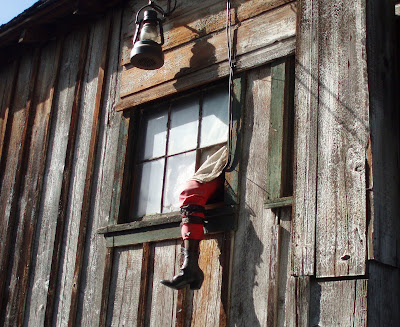 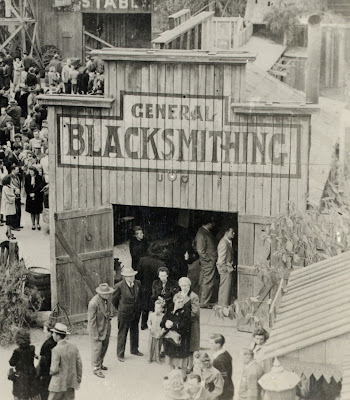 Still a functioning Blacksmith shop in 2008, even if it’s roped off now. 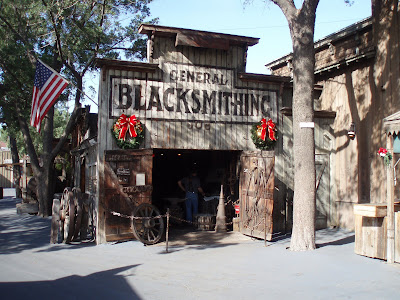 Check out the inside, talk about authentic! Even the phone is 100 years old! 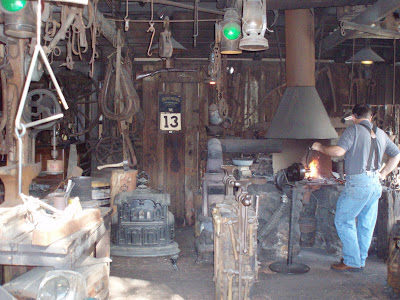 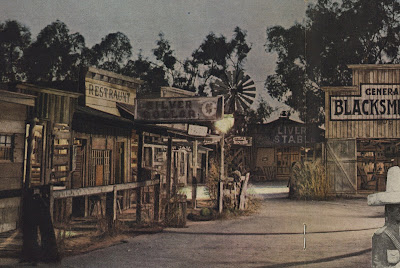 As seen today, the Livery Stable is gone and the Silver Dollar is now a shooting gallery. 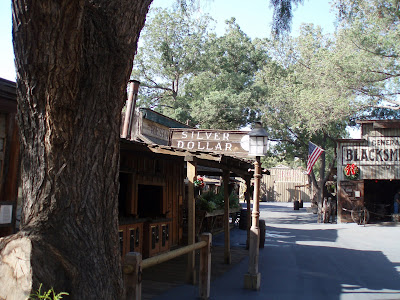 This row of building contains a museum now. 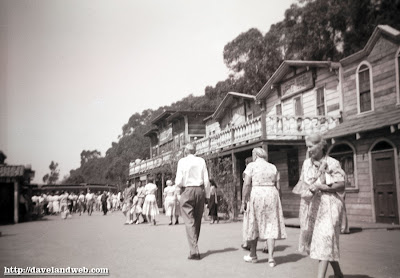 The Museum was closed, but the row of building hasn’t changed much. 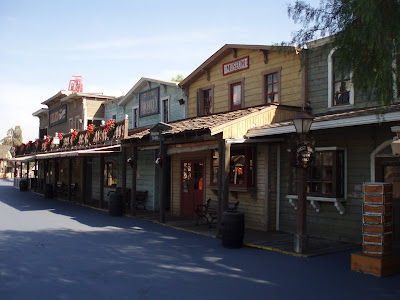 Hop Wing Lee’s Laundry as seen in an old photo from Stuff from the Park. 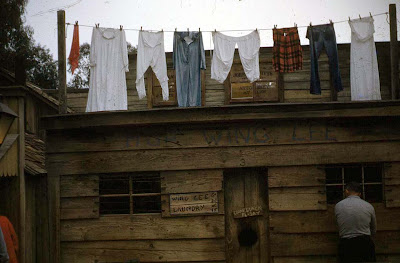 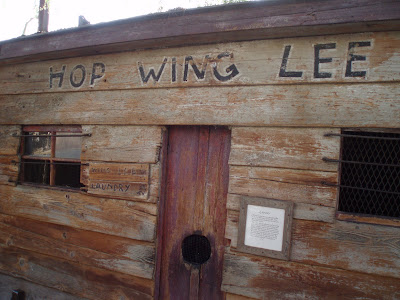 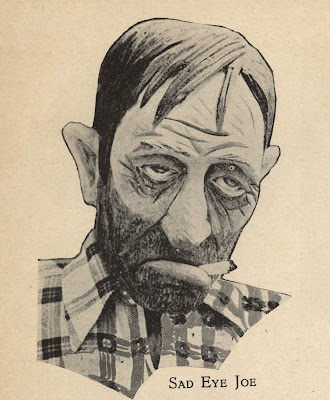 Sad Eye Joe today. I was having a hard time taking the picture when Joe started talking to me, I thought it was a recording, but it was really someone! He told me to come up front to Goldie’s and get a good picture since I was having such a hard time! 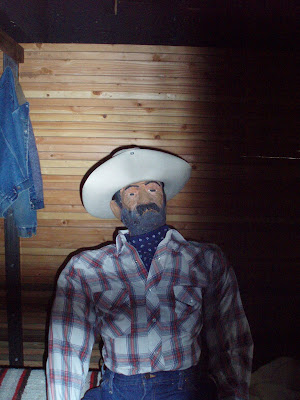 Here’s the little card he gave me, who says’ Knott’s doesn’t do Vintage? 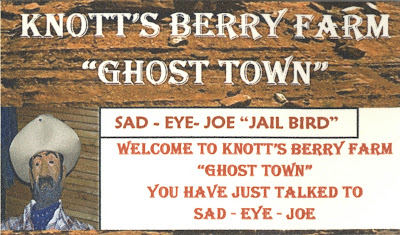 Just over from the jail is where you’ll find these gamblers as seen in a 1975 Souvenir Guide. 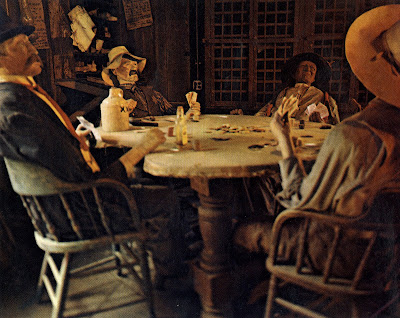 They are still playing today. 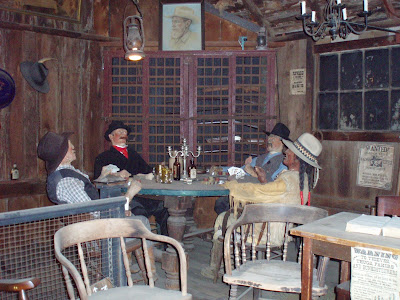 Come back tomorrow for part 2, more of Ghost Town Before and After.
Posted by Vintage Disneyland Tickets at 12:01 AM

Awesome. Love the before and after comparisons.

What a fantastic post, love all of the "before and after" photos! I haven't been back to Knott's for so many years, and I am afraid that it can't live up to my expectations... I want it to be just the same as when I was a kid.

Fantastic post! I am glad that you felt the urge to stop off at the farm. There is still plenty to see there. Thanks for the great before and after photos.

I love your "then" and "now" comparisons. By only showing what is still there and not showing the destruction that has taken place, you've made it seem like it never changed. Thank you! I miss the Knott's of my childhood and even the way it was when I worked there in the 80's. By the way, Sad Eye Joe has been voiced by a live person as far back as I can remember. When I was a kid, my dad would always make an excuse for my brother and I to go up to the jail alone....then he would give the man at Goldie's our names, ages, where we lived, etc. It always freaked us out that he knew this stuff about us....until we were old enough to figure out what my dad was doing. It's nice to know that Knott's is still willing to pay someone to give Sad Eye Joe a voice!

Major; If you stay to the west side of the farm (and don’t look up over the buildings) it is remarkably like when we were kids. The rest of the farm, well, not so much the same.

Lets Talk Knotts: Thanks and you’ve got a great blog there!

Tokyomagic; I tried to focus on what was still there, and I was amazed at how much I found. But yes, a lot is missing (I never did find the Knott’s original fruit stand, I asked two employees and they just gave blank stares). I had forgotten all about the Sad Eye Joe trick (I think my subconscious just assumed it was gone), I almost said something stupid (thinking it was a recording) I’m glad I was on my best behavior!

CHECK BACK for more Knott’s Before and After today and the next couple days.