Well folks it been one year since I started this blog! It seems like just yesterday that I did my first post (link), OK, maybe it does seem like a long time ago. However, it’s been a blast the entire time. 330+ posts in one year, not quite daily, but close. I’ve learned a lot; learned to scan and crop better (yikes, some of my early scans & cropping were pretty bad), I’ve met tons of great people and have truly enjoyed every minute. I've even meet a couple of great people at the park! Which by the way, I've been to 17 times this year, I worked that Annual Pass to death!

Now for today’s post. There’s not a lot of information on this subject, so I’ll share what we know. These “Magi-Pak” tickets were sold in the 1960’s. Probably 1963 to 1969, but that’s just a guess. The promotion appears to include; a “Magi-Badge” which I have never seen, DOES ANYONE HAVE ONE? Also included was a “prize coupon” and of course a deal on attraction tickets.

This loose Main Gate Admission ticket is undated, but certainly from the mid 1960’s.

Here’s the front of a Magi-Pak ticket book with the Magi-badge & Admission ticket missing. Not dated, but includes Walt’s signature and other clues that place it around 1964/65.

Fourteen of these Magi-Pak tickets are included in the ticket book, all “E” tickets if you use them wisely.

A fifteenth ticket was included that is very special and does date this book to 1964-65. It’s a special ticket that can be used for the Enchanted Tiki Room. In the Tiki rooms early days, it was owned by Walt personally so the normal Disneyland tickets were not accepted. See prior Tiki Room ticket post here (link). 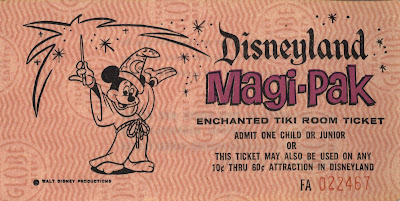 The ticket is very similar to the older one shown early in this post, just a slight price increase to 75¢.

Here is the back of the ticket book. Notice the “6610” date code for October 1966. Looks like you did not get your prize at the park; I guess they mailed it to you. What was the prize????? This deal also included a "Great Moments with Mr. Lincoln ticket", what a deal!

Come back tomorrow for Magi-Pak part 2 – the Lettered Tickets.
Posted by Vintage Disneyland Tickets at 8:11 AM

Hey Tim, CONGRATULATIONS on year #1, your blog has been a source of great info and a lot of fun besides. I know how much work it can be, and appreciate all that you do almost every day.

Here's to... however many posts you decide to do in the future!

Tim - Congrats, and thanks for a this great blog and a year of wonderful posts!

Congrats on your first year!! I’m a big fan of this blog which is one of the premier Disneyland blogs on the Web. Always interesting. Thank you for sharing it all with us.

Congratulations on a year of blogging! Your blog always brightens my day here in London and makes me wish I were in Anaheim.

Wow, almost a post every day, I don't know how you do it. Thanks for all the great posts, I look forward to them every day.

Congratulations Tim. All the work is greatly appreciated and a hell of a lot of fun.

One of the reasons why I like visiting your blog so much is because it has become a daily reference I can use in order to learn new nice stuff. It's like a curiosities box that surprises you over and over again.