Back in 2000 I was collecting Disneyland Guide books at a steady pace and I guess I never looked inside some of them. As I have been making a list of my Guide Books recently (I'm almost there Jason!) I have found several that have tickets in them!!! And most of the 1980's books also have the dated gate handout inside, oh boy, lots to post!!!!

I found this little mint gem last night in a 1981 Guide Book. "Summer Night Passport" this was getting near the time when the A thru E ticket books were going to be phased out. (MUCH more on that in a near future post as I have found more on when and how in 1982 the transition occurred.) $8.00 for 7 P.M. to closing, August 29th, 1981 was a Saturday, I would guess they were open till 1 A.m. of maybe even 2.am. Not a bad deal for eight bucks! 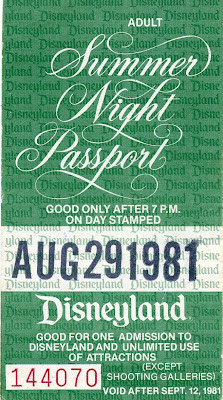 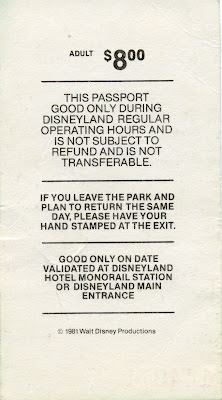 Hey the photo on the front of this 1981 Guide book looks a lot like the post card set I have been adding to the end of some of my posts (link). I guess they are from 1981!

Wow, Disneyland of my teenage years! I swear it actually felt like the colors in this map! 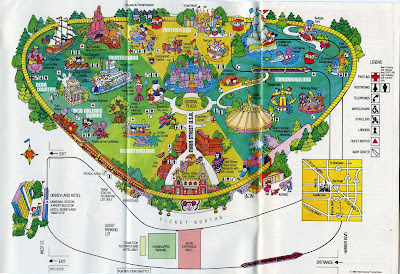 Back of the book has a neat promo for "Fox and the Hound" and "Condorman" I must have missed both of those. "Borrow a Polaroid for free"! Just buy the film, $15 for 8 so-so prints that probably wont last a lifetime! How about an 8 x 10 Polaroid taken on the back of the Lilly Belle (well, it looks like the Lilly Bell). I have never seen one of those, I wonder how well the 8 x 10 Polaroid format looked and has held up? 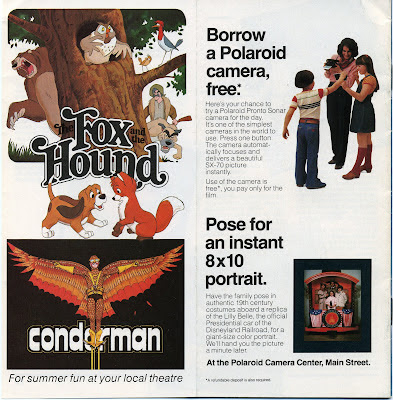 Tomorrow, well, tomorrow is up in the air, tune in and see.

Thursday, we have a Special post to celebrate ToonTowns 15th Birthday. Yes it's my favorite realm too (add sarcasm here), I love it so much I've been there twice! Shame on those of you that did not know this importand date was coming up! (I only know because I have the opening day tickets!!)

Posted by Vintage Disneyland Tickets at 5:59 AM

Condorman, holy cr*p! There was a brief period where Disney was making some very strange (and bad) movies. "The Devil and Max Devlin", "The Last Flight of Noah's Ark", "Night Crossing"...yeesh!

The Devil and Max Devlin, holy cr*p indeed~! It's like Disney let too many Idea's turn into actual movies!

On August 29, 1981, Disneyland was open from 9 AM - 1 AM. Entertainment included the Main Street Electrical Parade, Fantasy in the Sky, Patti Page on Frontierland's River Stage, The Glenn Miller Orchestra, directed by Jimmy Henderson, at Carnation Plaza Gardens, and "the space-fantasy rock band" Halyx on the Space Stage.