I know, its the middle of winter, but today it's "Disneyland's Super Summer"! The picture on the front of this July 27 - August 2, 1970 gate handout is supposed to be blurry, it's not my new scanner (btw, how's are the scans looking?). "Show me America" was part of the parks 15th Anniversary celebration according to the Disneyland Collector Series Cards (link). I find it odd there is NO mention of the 15th Anniversary anywhere in this gate handout. Ten days after the Anniversary and it was done. The 50th, well, is it still going on? 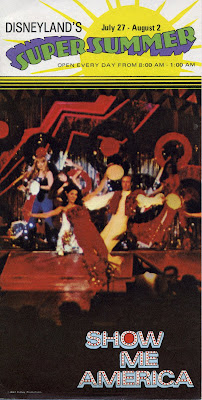 Man oh man Disneyland used to ROCK OUT! Check out all the entertainment. Conway Twitty! My Grandma used to have his 8 track in her car! The Fantasy Ballroom with the Harry James and His Orchestra sounds dreamy. And I'd love to dance with those hip girls at the Tomorrowland Terrace while listening to pleasuring sounds of Sound Castle, Ltd! 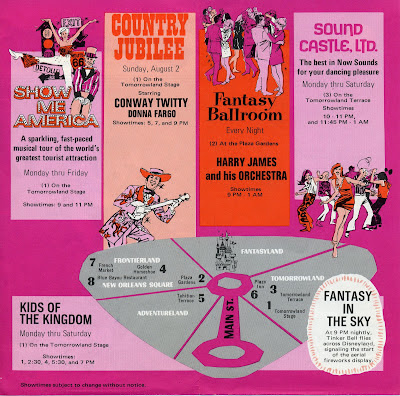 Check out the back, there is even MORE to see - Parkwide Entertainment and Nighttime Magic. 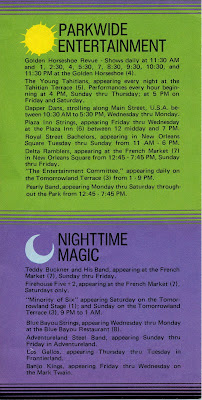 And here is a May 1970 Junior Ticket book. It's full except for the admission on the front. I bet this teenager had so much fun with all that dancing and entertainment shown above, they didn't have time for the ticketed attractions.... Nah.....

It really is amazing to me how much entertainment Disneyland used to have. And this is when you could buy a general admission ticket for a couple bucks! That was a true value. That was Walt.

Posted by Vintage Disneyland Tickets at 5:26 AM

The entertainment was always the best. Just buy general admission and have a ball. Great post. P.S. The POP pictures are awesome. I remember it well.

This must have been the high point of live entertainment at the Park--during my high school days. I remember it being almost omnipresent. Wherever you turned, there was a live performance. Even if you were there for the attractions, the live music added a real depth to the experience.

olddisneylandfan isn't exaggerating. '68 thru the '70s was my favorite period at the Park as a teen and young adult. I'd probably add the early 80's to that. The best word to describe the Park experience during that period is "lush." There was simply an abundance of good stuff in entertainment, attractions, dining, merch, landscaping, maintenance, CM professionalism -- the whole show was clicking on all 8, in an organic way that sadly hasn't happened since, IMO.

Bucker at the NOS bandstand on a summer night with the Mark Twain floating by. (Sorry, Fantasmic fans, but no way.) Hanging out after the MSEP and fireworks to hear big name bands at Carnation Gardens, where you got up close and the sound thundered -- you could feel Buddy Rich's drum solos through your feet in the Tinkerbell Toy Shop. Rock wasn't well represented, but even being a rabid Stones, Doors & Beatles fan I didn't miss it -- the Park's own style and ambiance was overwhelmingly immersive.

Good times. Just seeing the ticket books brings 'em back. (Speaking of tickets, a lot of DL fans that I know, who were there back in the day, feel something vital to the Park's spirit died when they abandoned ticket books.)

Thanks for the great blog!