Jiminy Cricket Ticket - And sorry for the rain... 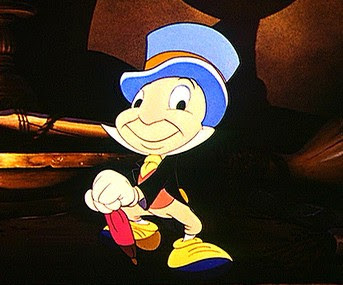 Jiminy Cricket is absolutely my favorite Disney cartoon personality. I'm not sure exactly why, especially since I have a pretty decent fear of insects. I think he's my favorite because when Jiminy sings "When You Wish Upon a Star" it embodies all that is Disney to me; the man, the cartoons, the movies, the park, the dream. It's all there in that one little song, sung by a cricket.

It surprises me that the little guy is a bit under-rated, but I kind of like it that way. I like Mickey and Minnie, I think Pluto is cute and Goofy is funny, Donald's fun, and the rest are cool too. But I just love Jiminy Cricket! Designed by Ward Kimball himself and voiced by Cliff Edwards, who was also the voice of the head crow in Dumbo and had an "interesting" life with a sad end.

I don't have an exact date on this ticket, but it must be from the late 1970's. It seems Disneyland really started to push the "kids" ticket specials using characters and prizes in the late 70's (in a future post we'll look at Tigger's Tickets). Jiminy looks happy on this ticket, complete with little green stars!

The back has the normal wording, just separated by distinct paragraphs and surrounded by a dotted line box, why?

Since this post is about Jiminy and I think we might be getting some rain today in Anaheim, here is a little card I was handed on a trip I took to Disneyland in October 1986. Jiminy appears to have lost his smile a bit. It DID rain that day, but they did not close the park (have they every really closed early because of rain?), however, lots of rides were closed. Somehow I ended up on Tom Sawyers Island (it opened when there was a break in light early morning rain). While I was over there it started to pour buckets, we hid in the cave for about 45 minutes. We bought Mickey rain ponchos that day, I was the only one in my group who refused to wear it! Boy did I get wet! Ah but I still have that 1986 Mickey poncho, sealed in the package! 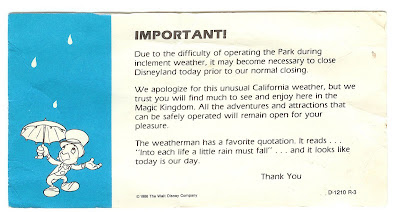 Lastly today, please indulge me a little since Jiminy is my favoite.

In addition to collecting Disneyland Tickets, I also have a large collection of 16mm Films. All kinds; school study films, syndicated TV shows, feature films and of course Disney films! I have the entire collection of the 1955/1956 "I'm no fool" series with Jiminy Cricket. These are all in stunning technicolor, and they are my favorite 16mm films to watch. Anyone remember these words?

You can view many of these films on You Tube. Do yourself a favor and follow this link and watch "I'm no fool with having fun" (there are links to some others from the series on the right hand side of the You Tube page, check'um out). This is Disney Education at its best! 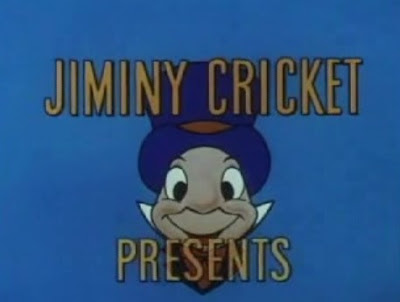 Posted by Vintage Disneyland Tickets at 6:17 AM

I always liked the card handout for rainy days, particularly echoing the Jack Wagner narration, "The weatherman has a favorite saying, 'Into every life a little rain must fall,' and it looks as though today is our day." They still had these at least into the late 1990s!

Hey Jason! Do you know if they ever actually "closed" the park early because of bad weather? The card implies it "may" happen. Thanks!

I am also a Jiminy admirer, always have been and always will be. I have been searching for the Jiminy "YOU" series everywhere! I was enthralled as a child with Jiminy Cricket and his educational shorts we watched at school. I have been searching for them so I can let my five year old experience the "Joy of Jiminy". In this day of technology and animation (although incredible) the simplicity of early disney and good values can never be outdone. Please tell me how I may get copies of the series and/or other Jiminy Jewels.

Tim, this answer is a little late (I've just been compiling research all these years), but yes, the Park has shut down early due to inclement weather! I think in earlier times it might have even shut down in the daylight, but in more modern times it would be an early close of an hour or two (when appropriate).

I read your blog from Cricket Tickets I am interested because of good information shared actually I belong to UK and I find Liverpool Tickets.

I have the 1970-71 guide with the Jimmy cricket apologize ticket fo weather closer. if anyone is interested in it let me know crash66408@hotmail.com