This is my 50th post on this blog, can you believe it? It seems like I just got started yesterday (time does fly when you're having fun). I hope everyone who visits my blog gets something from it, be it fond memories of the past or just fulfilling that lust for anything Disneyland.

One of the first comments posted to my blog was a question "How old do you consider vintage tickets to be?" Well, I am not sure. Does "Vintage" require a certain number of years? Is something "Vintage" if they no longer make or produce it? I'm thinking it's like Beauty, "Vintage" is in the eyes of the beholder or in this case, the blogger. That said, here we go...
First up is a set of tickets I purchased on March 28th, 2000. This was the first day the new ticket booths were open, the ones they use now. The old booths were still there so there was some confusion that morning as they were still setting up the new chains for the new lines. Since we arrived extra early (as always) we ended up being first in the correct line. A nice lady opened the window and told me "you are the first guest at this new booth". So while I am not sure I was the first guest at the first new booth, I sure was the very first guest at that booth. 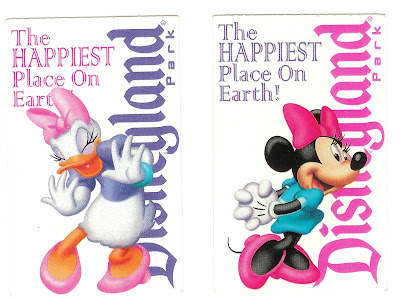 Check out the bar code serial numbers! I did not get ticket #00000001, the ticket lady pulled a test ticket and kept that one (I wonder if it will end up on EBay someday? of if was was even #1 or if her ticket machine only issued even numbers?) They don't used the magnetic strip anymore, just the bar code. Interesting promotion they were having at the time; Adult Socal residents got $10 off, but children didn't get this deal, so the ticket price was the same for me as it was for my 5 year old son. 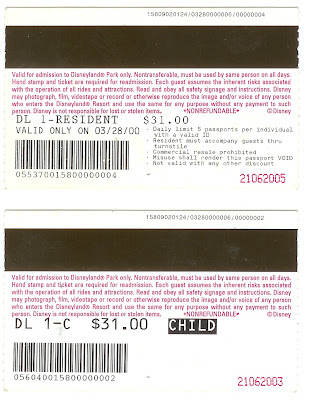 This next set of tickets is from December 25th, 1995 and are on loan to me by a co-worker. She took her daughter to Disneyland on Christmas 1995, how sweet! I like how they made these look like similar to the old "E" Tickets, nice touch, Walt would have approved. 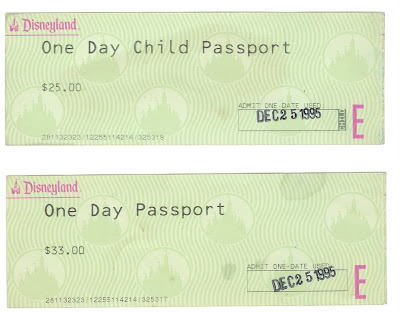 Special thanks to Priscilla for letting me scan these tickets!

Posted by Vintage Disneyland Tickets at 6:53 AM

Congratulations on your 50th VDT. I have truly enjoyed them all. Looking forward to many more.

Congrats! Time sure flies quickly in blogland...I don't know how you've made it this far...I figured a ticket blog would fizzle fast. You must have a ton of material - looking forward to many more posts, Tim - GREAT JOB!

Thanks for sharing.I found a lot of interesting information here. A really good post, very thankful and hopeful that you will write many more posts like this one.
vidmate.onl/
ViaMichelin.onl
https://showbox.run/

Very explicit and helpful post! Wondering if you could share more on video apps such as Likee video