Please set your time machine back exactly 21 years ago today so you can use one of these tickets to see the new Star Tours. Of course you have to actually work for Disneyland in order to attend this Cast Premiere event.

Inside there is a boarding pass for each night of the Cast Premiere. That was nice of Disneyland to give Cast memebers one for each night. Then again, they probably had to work some of those nights so they couldn't use them all! 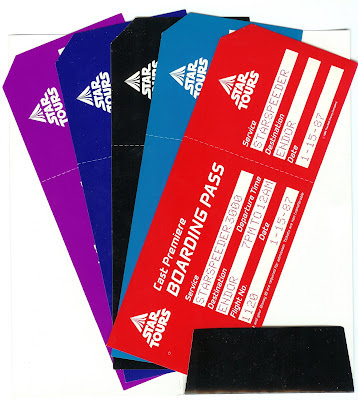 Here is today's ticket, we traveled to 1987 remember!

Here is a great full length video of Star Tours on YouTube. 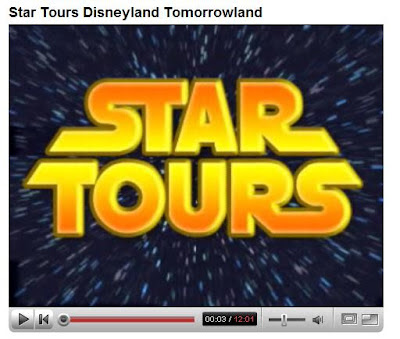 Last today, lets pay tribute to a former occupant of the Star Tours attraction building. Adventure Thru Inner Space had a very popular run from 1967 to 1985, it was one of my childhood and teenage favorites. I went to the park one day in October 1986 (see my rainy day post) and I discovered it was closed, forever. That was a sad rainy day.

This great "Castle Paper" Adventure Thru Inner Space ticket is from early 1968, I bet the attraction still had that "New Attraction" smell. The message about not being accompanied by an adult is so weird to me! 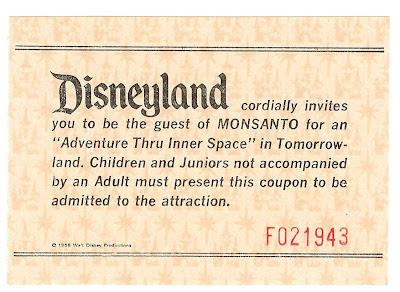 According to Wikipedia, Star Tours II is in the works:

"In April 2005, at the Star Wars Celebration III, Star Wars creator George Lucas confirmed that a Star Tours II is in production. This new ride will apparently be prequel-oriented. In a concept release, the sequel is described as being based on the Pod Racer sequence in Star Wars Episode I: The Phantom Menace.[citation needed] The new ride system will consist of a glasses-free 3-D High Definition screen and an improved motion simulator."

Wikipedia (link) actually has some great information on Star Tours. I did not know it was originally going to be based on Disney's 1979 "The Black Hole". I can see why they changed that idea. I paid to see that movie and I still want my money back!

Are the "boarding passes" not especially rare? I only ask because I saw a set on ebay years ago, and got all excited about them, so I put in a crazy bid. And I got them for pretty cheap! Lucky me, but it did make me wonder. I still think they are really neat, though!!

"Inner Space" is one of my two "most missed" attractions...I know I'd be having fun on that one, while Star Tours feels rather stale after 20 years. It seems unusual that this individual ticket has a date on it!

I don't think there are extra rare since they probably gave them to all of the Disney CM's. I have seen the entire set go for as little as $15 (the one I got!) and as high as $50. I have even seen incomplete set (only 2 or 3 passes) go for over $30.

Star Tours is VERY stale after 20 years, I like it BUT, I'd much rather be having fun with you on ATIS!

As always a bit of a rip off with about 5 shops to every ride and no heating for the queues and little shelter from the rain for those with buggies. Parade was good though and the kids loved the "Small Wdisneyland florida tours