Here's an odd little Knott's Berry Farm Souvenir Record. I can assume there was a series of these as this one is "No. 402 - Tunes Unknown" Maybe the other tunes in the series were known! This item is not dated, if I had to guess I would say late 50's/early 60's, does anyone know when these where sold? 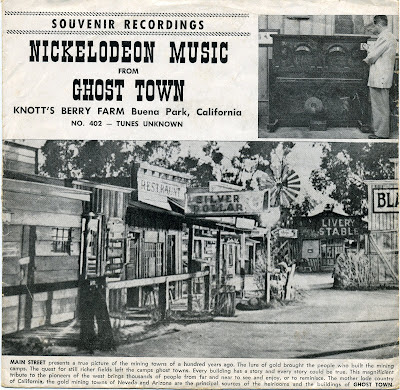 The back of the record sleeve has a picture of the "Band Piano". I seem to have a vague memory of there being a player piano at Knotts' around 1969 or 1970 (it's about as vague of a memory as the Chicken that played a song on a tiny piano for 25 cents!) Does anyone know where at Knott's this machine was located (the music hall?) and when was it there or was it even there at all? 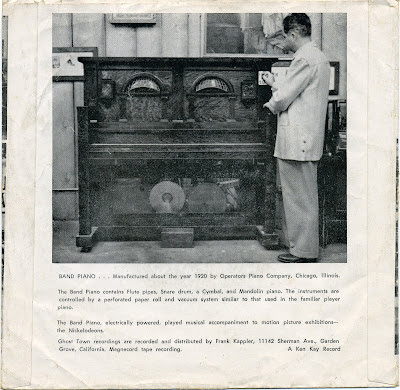 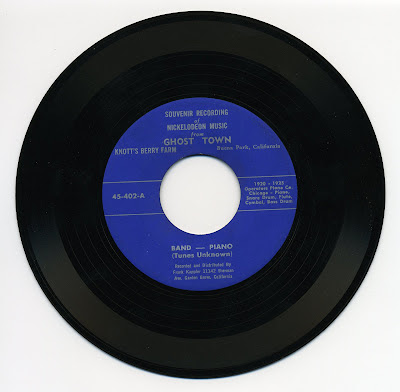 I know you are just dying to hear what this gem sounds like, so here is the first half of the record. Fortunately I have an old needle for just such occasions. I couldn't figure out how to post "sound"only so you can amuse yourself and watch the record spin around as you listen.

That was funky indeed. I like little odd collectibles like this, I hope you enjoyed it as well.

Posted by Vintage Disneyland Tickets at 5:17 AM

There is indeed quite a series of Nickelodean Music records from Knott's - along with many other types, including a few from Dude Sands one of the more popular 'street characters'. Our collection of Knott's records are currently in storage, but we'll try to get an inventory at some point.
The photo of the band piano may well be taken inside the Music Hall. But there were a number of pianos like this throughout the park.

love the video! all old recordings should have matching visual footage of the actual vinyl.

Maybe I'm delusional, but I think I remember seeing and hearing this "band piano". There was also a large sort of music box that held a giant metal disc punched with holes, I can't recall if you had to pay anything to make it play, but we did fire it up on a few occasions.

That is so fun! I admit I fell into a dreamlike state just now while watching the record spin - yes, I sat here and watched it spin the whole time... The music is great, too. The mechanical music machines were so charming and surprisingly complicated. The last one I remember listening to at Knotts was in about 1999. It was in the Ghost Town Museum (along with Sad Eyed Joe's original wooden head - where did THAT go??) and I was especially amazed that it played an actual violin using little rollers for the "bow." Fascinating!

Kevin, they also had a mechanical violin music box at Disneyland, in the General Store on Main Street. I remember playing it. The little rollers had to spin in some rosin before it played.

I'm glad someone watched the whole thing! I actually taped all 2 minutes of it, but blogspot wouldn't let me post it all!

That was very cool! Thanks for sharing it...

If you could record it onto your computer, you could reformat it from a wav into an mp3 and post a link to that. Just a suggestion.

Thank you so much for sharing this wonderful little recording! I didn't know there were any commercial recordings of these instruments at Knott's, let alone a whole series. I remember this piano...it's a Coinola Style X nickelodeon, made by the Operators Piano Company. They usually have a xylophone instead of the flute pipes, so this model was rather rare. I remember this machine from the late 1960s. It was located in the Music Hall, by the entrance. I used to have a homemade cassette recording of it, and a few other mechanical instruments in the Hall. Unfortunately, it's long gone. As far as I know, the Coinola ended up in a private collection.

An interesting thread about the Knotts musical collection can be found on the Mechanical Music Digest: http://www.mmdigest.com/Archives/KWIC/K/knott_s.html

That is funny I found this I just bought one of these records, with a total of three songs on each side of the record # is 45-404
any info would be great chernandezstable@aol.com

Any info would be great! nickbearden (at) gmail dot com

As I recall from my visits there as a child in the early 1950s, the machines took dimes. I begged my parents for money until I was told there was none left. They were my first influence in my becoming a blues piano player. There's nothing that comes close to that jangle!