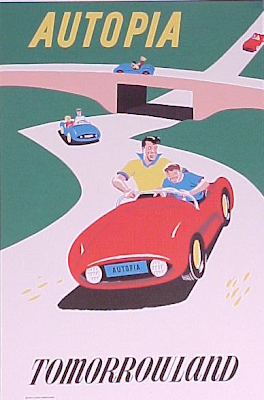 Autopia has got to be one of Disneyland's biggest hits. It was extremely popular from day one. It was expanded in both the number of cars and length of the tracks several times. There was a; "Junior Autopia", "Midget Autopia", "Fantasyland Autopia" and now just one BIG Autopia! There have been at least 8 versions of the little cars. I believe the current cars are really the 1967 Mark VII's under those weird Chevron bodies.

1954 Concept drawings refer to it as "Freeway Ride" It's funny to think that a "Freeway" was futuristic! What's really interesting is that it still has a massive appeal! Even in today's video game - virtual reality world, kids still line up for a spin on Autopia.

Today we will look at the Driver License's you used to get as a souvenir for riding the cars. It appears that from early on (1955?) they started issuing these cute little licenses. I don't know when they stopped. I know that I have been riding Autopia since at least 1969 and I have never been given a "Autopia Driver's License" until 2000 that is.

Since Richfield Oil sponsored Autopia from 1955 to 1970, these little license's may have been part souvenir and part advertising to future gasoline buyers! This first License is one of the earlier ones. It's not dated. I have seen dates noted for these to be between 1955 and 1957. It's definitely the early car with the exterior bumpers. This is on the nice Globe Paper (the "D" ticket stock I would venture to guess). 4,000 stations in the west, dang that's a lot! 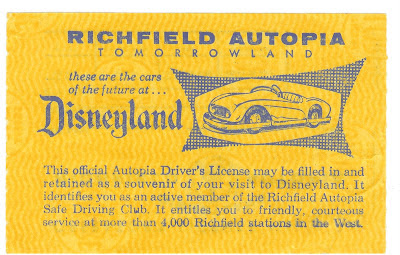 The back is very official looking. A Stamped License Number (Just like the lettered tickets). Neat little castle in a circle. Even a place for your finger print! I'm glad I have a clean blank original as this one, but I also would like one where a 1950's kid had filled in all the blanks. 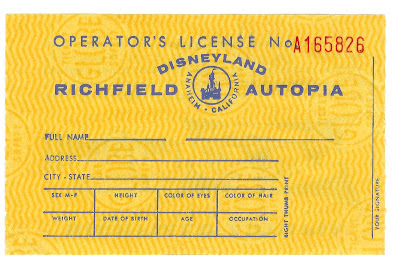 Again no date on this one, but it's got to be newer than the one above. No drawing of the Autopia Cars, I bet the body styles were changing too much to have a recent drawing of them. Did you actually have to pass a test? 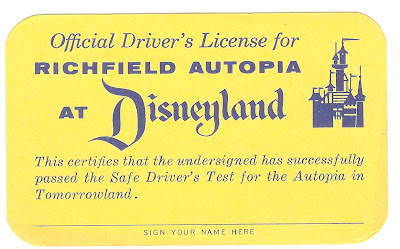 Notice the back says Junior identification card, was this for the Junior Autopia? I'm thinking not. Still 4,000 stations throughout the west! 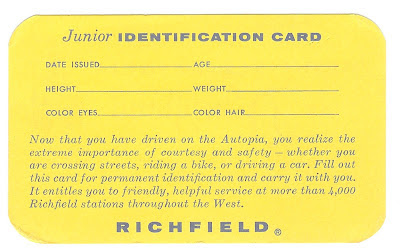 When Autopia was redone in 2000, Chevron became the sponsor and they started passing out Driver's Licenses again! And to my amazement, they still do! These are nice and they have a place for your picture. They used to have a place to take your picture (for $$) and you got these tiny photo's so you could paste one on the license. It used to be in the current Submarine cue area, did they move it over by the exit cue? 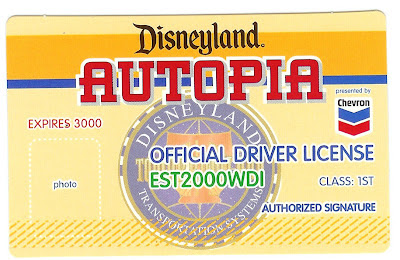 Hey I never noticed this until today, the backs are different! I thought they all said Sparky, but looking through my collection today I see Suzy and Dusty as well! Are there more? If so, I gotta get um! 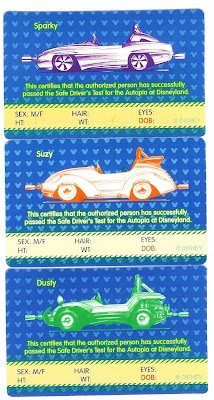 Posted by Vintage Disneyland Tickets at 5:44 AM

Great stuff as always VDT. Thanks

I think I'm going to start posting photos of my DL attraction posters pretty soon....can you tell that I am trying to "pad" the blog out so that I can keep it going longer?

I love attraction posters (who doesn't?) Post away please! I use um as "pad" too :-) plus these ticket posts can lack color and I just need color sometimes!

"The world is a carrousel of color, wonderful, wonderful color…"

I have one of the ticket-stock licenses with the stub attached. Will post it eventually. Also, the card-stock version came in at least 2 different versions...will post those two at some point. Great souvenirs.

Thanks Jed. Yes PLEASE post those, that would be great!!! I know I have seen more styles, I just don't where.

This is nice article!