Fourteen years ago today - January 26th, 1994 - One year (and 2 days) after Mickey's Toontown opened, the new Land finally got an "E" Ticket attraction. OK, a "D" Ticket, maybe a "C". But at least it was an attraction! This Invitation is HUGE, just like Toontown's opening ticket, only one inch shorter. The one time I rode this attraction I thought it was fun, it seemed like a mix between Mr. Toads Wild Ride and the Tea Cups!

This is the part the didn't fit in my scanner. It not a tear-off, it's just kinda there. 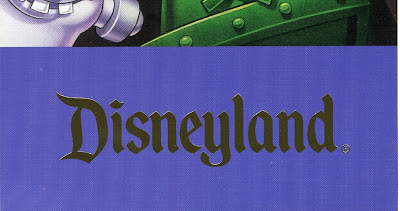 The back is interesting. Apparently you had to RSVP for this grand event. Your special visit included; "A whirlwind celebration that gets hopping in the morning" I wonder what that consisted of? AND "A Sneak peak at What's Upcoming at Disneyland Park" Hmmmm, what did people get to see there? "You wont believe what our Imagineers are creating" Anyone know what was on display in this "private preview"?

Looking at the fine print it appears that if you lived out-of-town you got complimentary air fare and hotel accommodations! I wonder exactly how you got invited to this thing anyway? 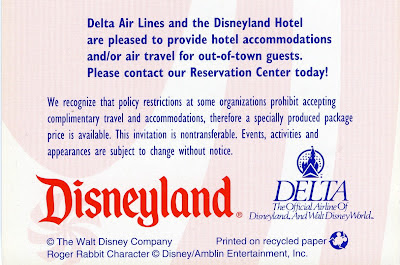 Did Disney really think Roger Rabbit was going to be the next Mickey Mouse? The movie was good, but, something about it seemed uninspired to me. I think that uninspired feeling translated right into Toontown and Roger Rabbit's Car Toon Spin. Alright, I'll take my amature movie critic hat off now.

This ride is very kooky and brimming with eye-popping symbolism out of a dazed corrosive trek (or for this situation the exemplary 1988 motion picture "Who Framed Roger Rabbit"). I have not ridden this ride since I was a kid yet it holds up shockingly well still! I like the intelligence of the line and the guiding wheel in the autos which really do turn the vehicles around as you go, however they do require a touch of exertion to truly control and will consequently fix amid specific fragments of the ride, for example, the plain end.