Today lets take a look at a few Tickets from "Lion Country Safari" Irvine, California. I only went there once and that was in 1972! As a kid I remember the car drive thru part was scary and the "theme" park seemed the same as Busch Gardens in Van Nuys. I was 7 so what the heck did I know!

There are some great construction photos here: theimaginaryworld.com, also be sure to scroll all the way down to the link for the "now" photo's, sad.

This first ticket would be the oldest of the three we will look at today. It's on thick globe paper, more like card stock. I am guessing they would punch out each of the four "attractions" once you rode them. Minimum retail Value $7.25, What was the maximum Value? Check out the rules on the back! 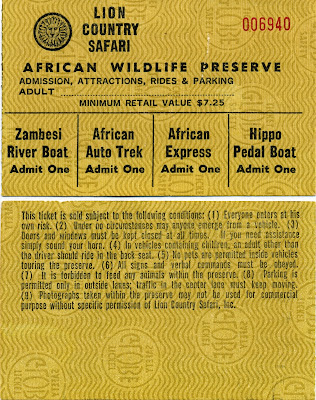 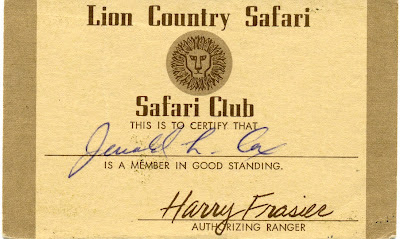 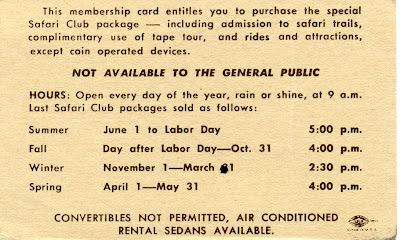 I'm guessing this to be towards then end of the run for the Safari. While these are still on globe paper, they are not nearly as nice, the print is pretty cheap and the back is blank. I have a big stack of these in a tablet format, I suppose lots of people never got (or wanted) their Complimentary Tickets! 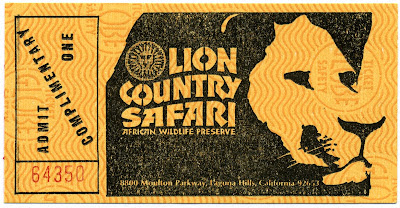 What I remember most about Lion Country Safari the 1981 addition of the "Irvine Meadows Amphitheater". I have been there many times. To name a few; Jefferson Starship (when animals could still be seen behind the stage area!), The Eagles and my favorite band RUSH!

Posted by Vintage Disneyland Tickets at 6:15 AM

there's a park very similar to lion country safari up in oregon that i went through once...i can't remember what it's called though. it was pretty neat!

These are sweet. Thanks for the flashback.

I have a few slides from Lion Country Safari, one of these days I will have to scan them and post them.