The attraction opened July 1, 1975 and although today's Tomorrowland has been transformed into something very different, the WEDway ride system and vehicles have not change at all. It looks and feels like a WED attraction should.

As shown from the 1975 Magic Kingdom guide book, the WEDway was an E-ticket from day one.

Here’s an E-Ticket from June 1975. Sadly, this would be a short stay of the WEDway PeopleMover on the E-Ticket. 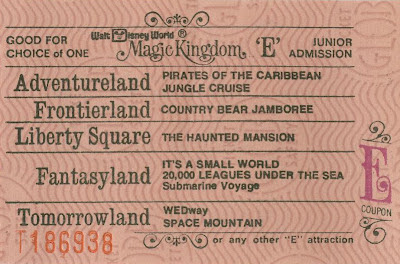 By September 1976, the WEDway found itself on the D-Ticket, where it would remain until the letter tickets stopped in 1982. 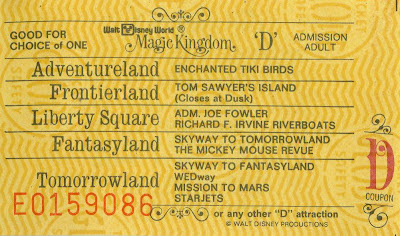 Here is a map from the 1975 guide book showing the new WEDway PeopleMover track. It runs 5,484 feet at an average of 6.84mph. It has 629 linear synchronous induction motors and 32 trains with 5 car per train! 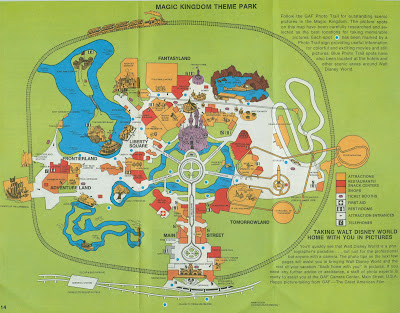 On to the present. The front of the building is a victim of the 1994 New Tomorrowland. At least most of it looks like it can be removed, sometimes going “cheap” has its side benefits. 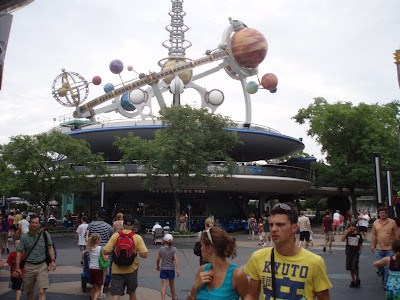 Oh yes a Gantry Tower, and it was in use! What fun to see the Gantry elevators, the Rockets and the People Mover all in motion at once! Fantastic sounds too! 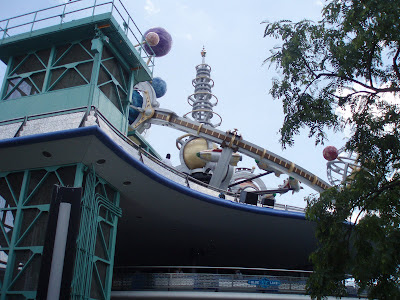 The WEDway was temporarily down, but it didn’t stop a large line from forming. As soon as it opened it literally swallowed the line in two minutes. I love the Speed Ramps! I have no idea who the "thinking man" is on the right, but he looks at peace with the world of Tomorrow. 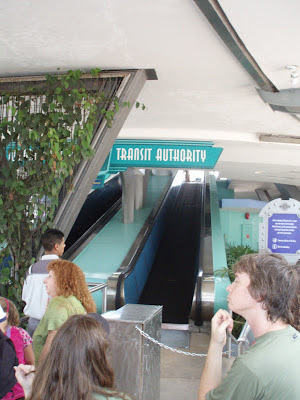 Loading area as seen while traveling up the Speed Ramp. 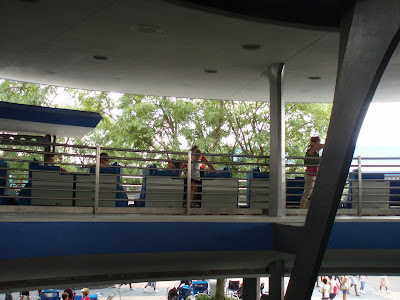 Your WEDway PeopleMover car awaits you. The door closes automatically, watch your legs and arms and please keep them inside the vehicle at all times. 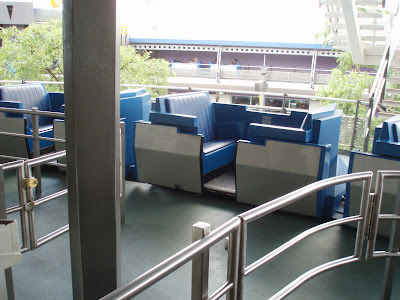 As you head off the load platform, you are moving an excruciating 1.84 mph; you can hear all the kids saying “it too slow”. Mom & Dad know better and soon you are going fast enough for a nice breeze. 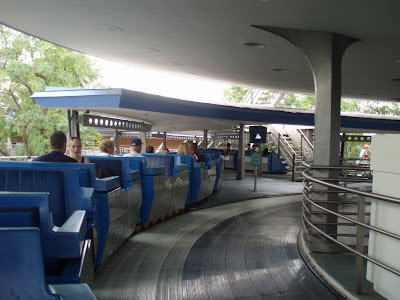 Come ride the first section and see for yourself. 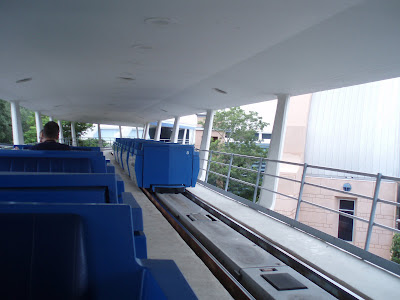 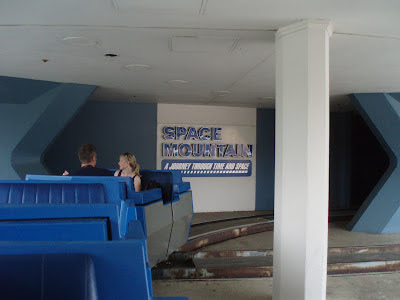 On my third (or was it forth) trip on the WEDway, I was taking the time in the dark mountain to review some photos on my camera when I realized that Space Mountain was not running and the light were ON! I only got 5 seconds of it, but its fun to look at.


Some of the outside track sections. The part around the load platform has been defaced with the “New Tomorrowland” junk. 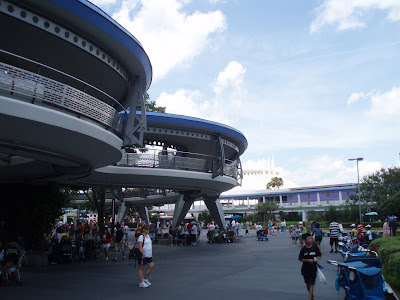 But as you head away from the central area, there is plenty of the old architecture still available to see. It's true, I am a Disneyland Geek because this style of architecture looks so much more appealing to me. Yes that's the old Skyway building in the background, if you want to see more of it, come back on Saturday for a Skyway Saturday. 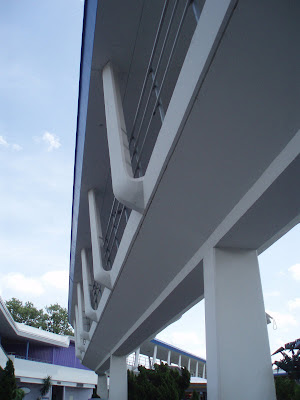 Now as we head thru more attraction buildings, we find part of the progress city EPCOT Model. This is very difficult to take pictures of because it’s behind glass. I was able to get a few pictures, but the flash really washed the poor thing out so bad it’s not fair to post them. The video mode shows less detail, but the lighting is much more as Walt intended it to be.


Well, our 10 minute ride is coming to an end. Neat set of stairs leading up to the Rockets, reminds me of Disneyland. 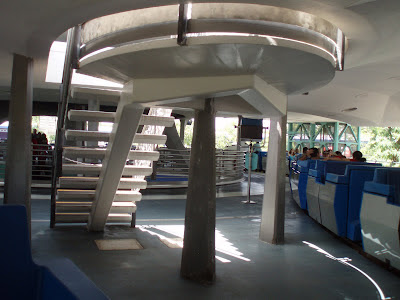 Thank goodness they left the inside of this attraction in its original state. The architecture is amazing, where's George Jetson?. 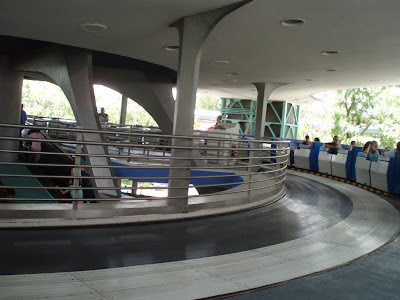 Time to hit the exit Speed Ramp, no running and please hold the hand rail. 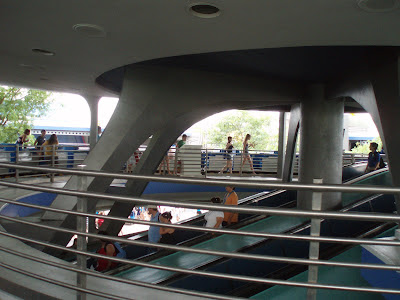 I rode this attraction 5 times. I could have done it more, but I had more photos to take and more ice cream to eat!

This is a must do “E-Ticket” attraction for any diehard Disneyland fan.
Posted by Vintage Disneyland Tickets at 12:03 AM

WDW has it all. It is time we returned some of these things to Disneyland. Great pictures Tim.

Long live the WEDway People Mover! Thanks for the shots, Tim; it's always nice to take a ride.

Sure do wish the People Mover was still moving people at Disneyland. I visited two days ago and it broke my heart to see it dark and empty.

So does this mean that at Walt Disney World people--voluntarily!--don't get out of the cars to get run over?

The thing I loved most about the original WDW Peoplemover was how it offered *three* preview windows of "If You Had Wings" and allowed one to see this great and much-missed Tomorrowland favorite from a totally different vantage point. Ever since "Dreamflight" replaced IYHW they have had no regard for how to utilize the Peoplemover's ability to properly preview the attraction it passes over (with Buzz Lightyear it's even worse).

Jack Wagner did a great job with the original Peoplemover narration, and during my last visit to WDW, I actually listened to an old audio recording of Jack's narration as I rode the Peoplemover. For one moment I could be brought back to memories of a grander time in WDW history than exists today (though I will admit WDW is fortunate to still have this ride, while I know how much DL would love to have theirs back).

Wow! Nice multi-media essay. You made my day. Loved the little videos especially the Epcot model which looks lot like the one that was in Carousel of Progress at Disneyland. Wonder if it’s the same one? I loved the (Disneyland) PM as a kid and would have appreciated it even more now that I’m, er...more mature. The fact that they have one at WDW makes me want to go to Florida just to ride it.

Yes, sundaynight, the model is the same one from Carousel Of Progress at Disneyland.

Thanks for a great trip on WEDway!

Thanks everyone for the nice comments! I'm glad it’s not just me that loves the PeopleMover’s! Disneyland needs the PeopleMover back. I was at Disneyland yesterday with out of town relatives and it was hard to explain; a dead People Mover track, a freaky satellite rotating thing on top and “Inoventions”.

Eric, “If you had wings” sounds so cool; I wish I could have seen it. The Buzz thing is silly, and the view of it from the PeopleMover is silly as well.

Sundaynight, it’s worth the trip. WDW is something any Disney fan should do, at least once.

Progressland; It seems people actually are paying attention and staying in the cars or at least if they are getting out they aren’t getting crushed by the next car. Maybe they shut it down on Grad Nites???

"If You Had Wings" thankfully lived long enough into the early years of camcorders so there are some visual legacies of the ride-through that can be found on Youtube and at Mike Lee's "Widen Your World" website (which does for WDW history what this and so many other great sites and blogs have done for DL history) to offer a fair idea of what it was like. I'm still hoping that *someday* a camcorder recording of the Peoplemover ride during the IYHW era will surface, as it is now the one remaining elusive Holy Grail of WDW video for me.

Even though I've never been to DL, my love and respect for WDW history has made me fascinated by DL history too and I love reading this blog and other sites too to learn more about it. Great job!

This is a great tribute to the PeopleMover. It's funny how much more modern the "old" Tomorrowland looks today.

I am so happy to have found your fabulous blog. I am Disney lover, and I will never be able to call this attraction Tomorrowland Transit Authority or TTA... it will ALWAYS be the PeopleMover to me and now to my kids (raisin em right!) This post is just fantastic. I am sorry I have never been to DL, but growing up in the middle-class south just did not lend itself to trips to CA. However, it's our family's goal to get to all the Disney parks at some point and DL is next on our list. Again, LOVE your blog!

Great look at the remaining Peoplemover, it makes me miss the California version that much more.

I have many memories of the WEDway Peoplemover from trips to WDW as a kid(im 38 now).The WEDway and If You Had Wings were two of my favorite rides in the park.I am disgusted with what has happened to Tomorrowland.Does anyone know who's stupid idea it was to rename the WEDway to the Tomorrowland Transit Authority?I would love to know so i can write a nasty little letter to them.It was called WEDway for a reason.The WED in WEDway stood for Walter Elias Disney,and also WED was the imagineer department for Disney back then.Why do they seem to think that if you add a new name or something it will make it better?Sorry to go on complaining but this really tears me up inside.I hate to see my childhood memories messed with.