Well we finally made it, the "E" Ticket! Let's look at what caused the "E" ticket to happen in the first place.
As we learned in the "A" Ticket series, the first lettered ticket books only had A-B-C Tickets. This was from October 1955 thru the first half of 1956. By the summer of 1956 many new attractions had been added to Disneyland, therefore the "D" Ticket was introduced. Did this make Disneyland more money, I bet somehow it did.
For the summer of 1959, "Disneyland 59" was getting all kinds of cool new attractions. "Six Spectacular New Attractions!" Check out this cool clip of the Disneyland 59' TV Special, this clip actually looks cleaner and sharper than the Disneyland Treasures DVD version I bought, Hmmmm? Maybe it's just because it's smaller. 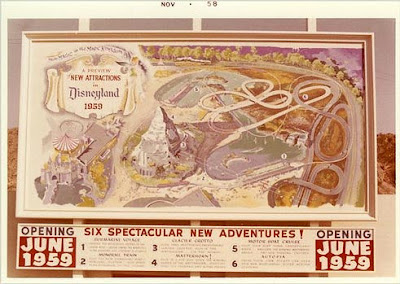 With so many new attractions, there was no way to fit them all on the A-B-C-D tickets, so Disneyland gave us the now famous "E" Ticket. Three of the Six new attractions in 1959 would be on the first "E" Ticket, along with Walt's best of the bunch.

From June 1959, the first "E" Ticket had a great line-up indeed! The SF & D Railroad, with all four stops! TWA Rocket to the Moon. The New; Submarine Voyage, Monorail and Matterhorn Bobsled. Rainbow Mules and Coaches, the Mark Twain & Columbia, Tom Sayer Island Rafts, and the Jungle Cruise!

This is a Replica 1959 "E" Ticket from the new Disneyland Secrets DVD. These are really nice. To my surprise, this is real globe paper and the colors are good. Check later this week for my full review of the replica ticket book.

Here we have a June 1960 "E" Ticket with no TWA Rocket to the Moon, its been demoted all the way down to the "C" ticket, I wonder why it didn't just drop to the "D" ticket? Speaking of the "D" ticket, the Mark Twain and Sailing Ship Columbia both sailed down to the "D" ticket in 1960. Also notice the upgrade to the Mine Train and the Pack Mules, they now go thru Nature's Wonderland! (Pack Mules closed at dusk). This is the only "E" ticket I have from 1961, so try to ignore the poorly torn perforation on the left side. A couple of neat changes have occurred. The SF & D Railroad Trains now go thru Grand Canyon Diorama and the Fantastyland Station is gone but returns in 1962. And see the Monorail, by 1961 the line was expanded and now it goes to Disneyland Hotel & return.

and we have the Fantasyland Train Station back, however this is it's last appearance on any ticket. When did it close? And what's this, have Flying Saucers landed in Tomorrowland? Oh boy, human air-hockey, this ride looks like it was more fun in pictures than in person, but I guess I will never know. (This is the ticket I use in my profile on blogspot.)

That's it for today's post, tomorrow we'll pick back up in 1962 and check out the other colors the "E" Ticket's were printed on.

Posted by Vintage Disneyland Tickets at 5:31 AM

Six new attractions? They count Glacier Grotto as one! But you have to ride one of the Skyways to go through it!

I wonder why they waited two years to add the Grand Canyon Diorama to the tickets?

Fantasyland Depot was around from 1956 to 1966 when it got the axe for "it's a small world" construction--not to return until the Videopolis Station opened on June 30, 1988.