I hope you like "D" Tickets, because there's a whole slew of them for this final part of the "D" Ticket series.

The only difference from this May 1971 "D" ticket compared to yesterday's May 1970 "D" ticket is a renaming of an attraction. The "Indian War Canoes" are now "Davy Crockett's Explorer Canoes". While obviously an early attempt at PC, the new name at least makes sense and fits with Frontierland, however, the Canoes won't stay in Frontierland for long. 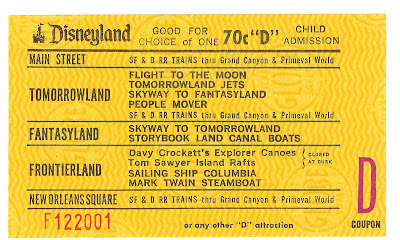 March 1973 finds Davy Crockett's Explorer Canoes in a new land, Bear Country! Did they actually moved the loading area at this time? Anyone know? 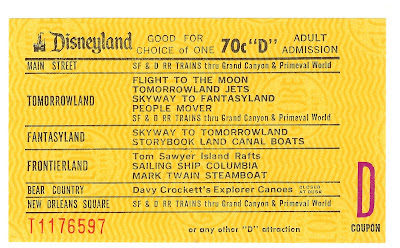 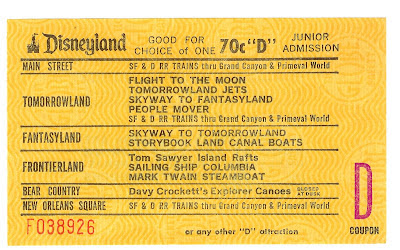 First of the smaller tickets from June 1974. They reordered the attractions in Tomorrowland, I have no idea why, it's the same rides! The Mine Train thru Nature's Wonderland has arrived on the "D" ticket back from a few years stay on the "E" ticket. 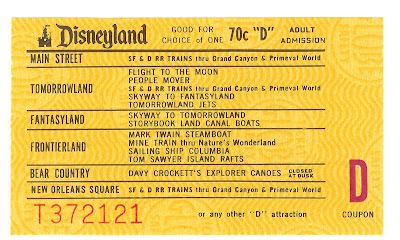 June 1976 finds three attraction name changes. "Flight to the Moon" is now "Mission to Mars", the moon is so yesterday! "Tom Sawyer Island Rafts" is now "Rafts to Tom Sawyer Island" Why? And the "Tomorrowland Jets" are now the "Rocket Jets" that one sounds cooler, why didn't they do that in 1967?

And notice the People Mover is missing, it's gone from the attraction list in the back of the ticket book too. I bet it's closed due to the construction of Space Mountain! Also, sadly this is the last appearance on a ticket of the Mine Train thru Nature's Wonderland, RIP... 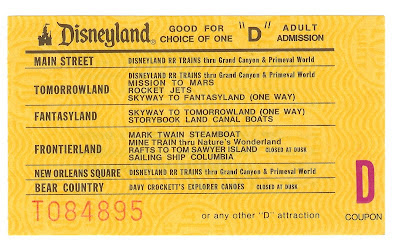 America's Sings joins this June 1977 "D" ticket and the People Mover is back. 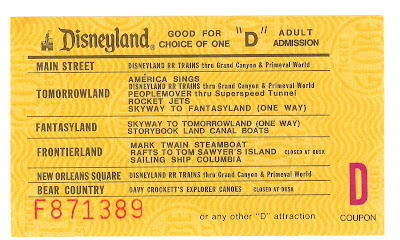 How did this get in my pocket? Let's try and use this May 1978 Knott's "D" ticket at Disneyland, think they'll notice? Funfact: Knott's lettered tickets are valued in the reverse order from Disneyland's and Knott's never had and "E" ticket. This "D" ticket is for Knott's least expensive attractions.

Last, from September 1980, heading into winter it seems that the Columbia and the Canoes are both missing. I think they only ran these on nice days and weekends therefore the didn't want them listed on the tickets as not to disappoint the guests? 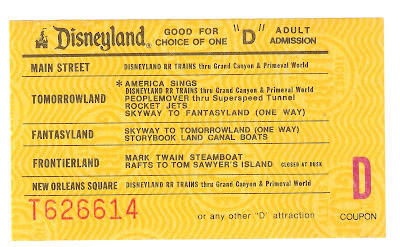 Oh boy, I sure do love reviewing these tickets. And thank you so much for your nice comments.

This weekend; Saturday is a mystery and Sunday is the 1965 INA Guide full post blowout.

Posted by Vintage Disneyland Tickets at 6:09 AM

As you continue with your ticket posts the information just gets better. I hope all you cyber folks out there appreciate the work this guy is doing and what it takes to put this blog together. Because this is truly COOL!. As always nice work Tim.

I think the canoe name changed because the Indian Village had closed (or was in the process of closing for Bear Country).

For the June 1974 ticket, it looks like they'll alphabetized the attractions within each land (though retained some sort of counterclockwise ordering of the lands themselves).

The Rocket Jets was the name of the attraction from when it opened in the new Tomorrowland on July 2, 1967. I don't know why nobody told the ticket people!

Thanks Viewliner! Progressland; sometimes I have the feeling the "ticket people" were a little disconnected from the goings on at the park, don't you ? :-)

Man! You glean more info from the ticket books than I ever though possible. I need to pay more attention to all of those details!