Today’s post is dedicated to Dave over at Daveland, he’s been sharing his current trip to Walt Disney World on his blog. Since Dave did a little reminiscing about his visit to WDW in the Summer of 1978 (link) here’s some tickets & a Guide Gook to go along with the fun memories.

A Junior 8 Adventures in the Magic Kingdom ticket book

Eight tickets, why not ten??

The tickets with the fancy “Letters”.

Even the back of the tickets got fancy curly-cue things.

***UPDATE*** Mick Cozart noticed that the "E" ticket shown above with the other tickets has the WEDWay People Mover and so does the "D" ticket. Someone actually looks at these things??? Well, I didn't have a Junior "E" ticket for 1978 so I substituted that "E" ticket which appears to be a couple years older than 1978. Below is a 1979 E-Ticket that more closely represents the correct attraction line up although the Hall of Presidents is missing!. Thanks for noticing Mike, at least someone is paying attention. 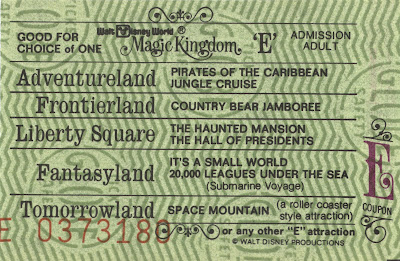 Here’s the cover to the Summer 1978 Your Complete Guide to Walt Disney World. 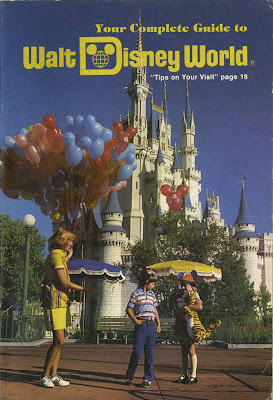 Thankfully most of the attractions (poor Keel Boats) on these pages are still at the Florida Park, even the Hall of Presidents with their Stepford eyes.! 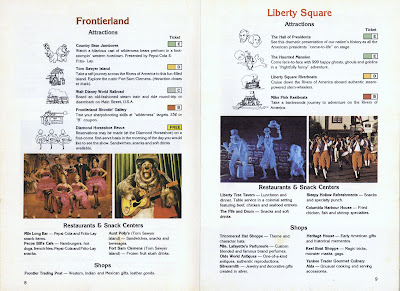 Tomorrowland rocks, WEDway PeopleMover AND the Carousel of Progress! I wish I had a chance to see “If you had wings”. 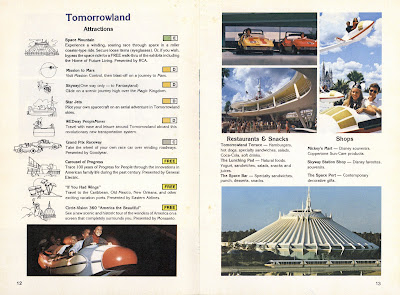 This map actually makes the park look BIG, which it is. 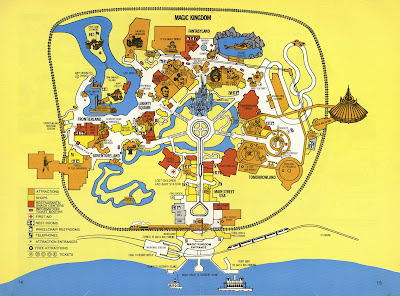 Tips on your visit. 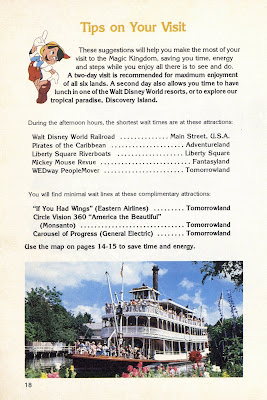 Dave’s hotel of choice, nice! Since we know were Dave is staying, lets all Krash his party! 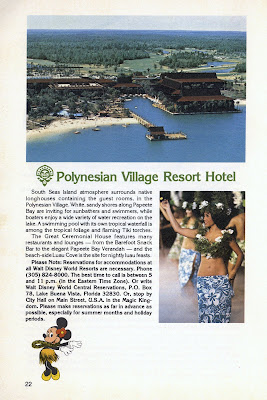 Hmmmmmm......I think you may have a "mistake" ticket! Note that the WEDWAY (PeopleMover) appears as both an "E" Coupon and "D" Coupon! Maybe you'd get a different trip depending on what ticket you gave up! The WEDWAY PeopleMover at Walt Disney World was never a "E" Coupon.

Thanks for the great post today. I miss the 1970s WDW something terrible. Any chance of posting the entire guide on Bonus Sunday? It would be much appreciated!

Thanks Tim! The 1978 trip is one of those things that I will always remember. Although I preferred Disneyland (even at that young age), it was the coolest thing to be able to board the Monorail without parental control and be whisked right into the park. My stepbrother and I were convinced that riding Haunted Mansion at night was the best thing in the world. I also missed the Empress Lilly on this trip; it was a way cool floating restaurant back in its day.

The Magic Kingdom in its "golden age!"

Hi Mike! Someone actually looks at these scans? - LOL! I didn't have a 1978 Jr. E ticket so I used an older E-Ticket. I updated the post with a 1979 E-ticket, which is closer but still not quite right.

PeglegPete, you got it - check back on Bonus Sunday for a Double Dose of WDW!

HEY DAVE! I'm glad you liked the post! I love the WDW Monorails, as a kid that would have been pure magic! The Empress Lilly looks impressive, to bad it doesn't actually sail. I hope you're having a super trip!

So wait, even if you substituted an "E" ticket from a different year, Mike Cozart states that "The WEDWAY PeopleMover at Walt Disney World was never a "E" Coupon." And yet, there it is on your E ticket. So was it an "error" ticket?? If so, that is a very cool item!

Hmmm, I missed that part of Mikes comment. Sorry Mike, but the WEDway was an E-Ticket when it opened (link) granted it was only on the E-ticket for its first year...

Yes, the Empress Lilly! Great restaurant. Believe there are some construction photos of her around here someplace...

This is Disney World as I remember it best. I miss it to this day.

Amazing vintage Disney World memorabilia. I was just in Disney World and stayed at a wonderful Disney World resort. If you want more information on it I recommend visiting TishmanHotels.com.