Blogspot is giving me one heck of time posting photos or maybe it's my ISP?

So this post is abbreviated, there were going to be 6 scans, I'll try and update it later today.

From 1963 or somewhere near there, here's a neat S & H Green Stamps book. We had Blue Chips stamps where I grew up in the 1970's, but these seem like the same thing. I have a bunch of Blue Chip books with the stamps in them, the pages get stiff and kinda yucky when they are pasted full of stamps! 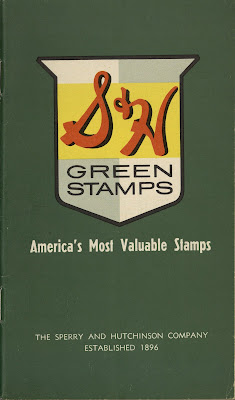 This book related to Disneyland in that you could redeem them for Disneyland tickets! 1 3/4 book for an Adult "Deluxe 15-ride ticket book". Oh boy would I like to see one of those certificates S & H would give you to take to Disneyland. 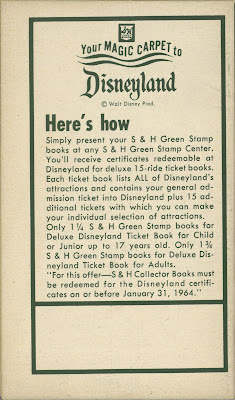 Some of the places where you would get green stamps. I recall the gas stations had a machine with big circular dials, the attendant would "dial" the amount of gas you bought and the machine would dispense the blue chip stamps. 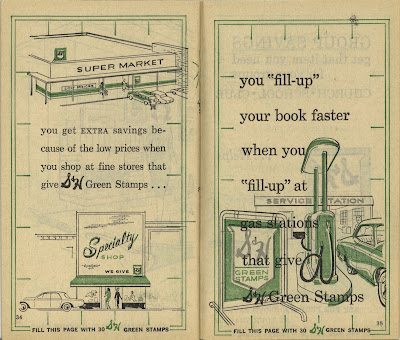 And of course, who can forget that great Brady Bunch episode (Season 1 I think) where the Brady's have enough books for one large item; the boys want a fishing boat, the girls want a sewing machine, and the fun begins.... Who can tell what the end up getting? Don't look it up on the net...
Posted by Vintage Disneyland Tickets at 9:06 AM

Man, I have seen too many S&H Green Stamps Disneyland ticket advertisements in the newspaper archives!

My family's first visit to Disneyland was in 1963. My mother and my older sisters filled the pages of books of S&H Green Stamps for our family to go to Disneyland. There were six of us kids and my parents, so that was a lot of stamps. What stands out to me the most about my first Disney visit was getting to ride Peter Pan with my mom. I was in first grade and I remember feeling afraid and my mother kept telling me to look at the pretty (London) lights below. To this day, Peter Pan is still one of my favorite rides! Thanks for posting this blog. :-)

My two girls, five and three and I went in 1966. We used S and H Green stamps for admission to Disneyland.
Rented a two-seater stroller and off we went. I remember Jonah and the Whale, "It's a Small World after all."
Passed on Matterhorn as I was "expecting a baby." Tomorrowland was closed and almost didn't make it to gate at closing.
Great adventure, our only time if you can believe it.
Went to Disney World last year with oldest daughter, husband plus, greats and grands.

The summer before I went into 4th grade we went to Disneyland on green stamps. There were 8 of us. Mom,Dad and we 6 kids. We went to Azusa, California to visit my Aunt Jackie,Uncle Don and my 2 cousin(Greg&Gina). My dad hadn't seen his brother since they were kids. My dad was left behind when his dad and I think 2nd wife moved to California. Took my uncle Don and my dad's wife's kids . My Dad was raised in a foster family. My memory of Disneyland was "IT'S A SMALL WORLD ".