First up today, we have a Trio of "Castle Paper" B tickets. I call it Castle Paper because it has little Castle's as the watermark, they are not the usual "Globe Ticket Company" paper. I lay awake at night pondering why they chose not to use Globe paper during part's of 1966, 67 and 68.... I'm sure it bothers you too!

I don't have an exact date for this first one, but it's got to be 1966 since I have never seen the Castle paper prior to 1966. It has the "Art of Animation", so it's got to be before 1967. I think they shut down most of Tomorrow land in late 1966 for construction of the "New Tomorowland 67" (my favorite version of Tomorrowland, by far). 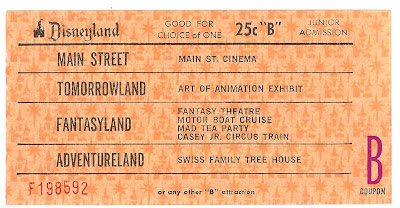 Now as we saw with the "A" ticket series, The "New Tomorrowland 67" has no room for low line "A" and "B" tickets! This May 1967 "B" has no Tomorrowland Attractions, you will need "C" tickets and above to pay for all that new stuff! The Keel Boats are back! 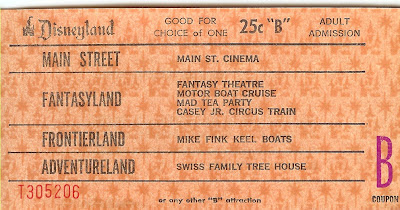 By Late 1967, the Motor Boat Cruise is gone (briefly to nowhere?), Fantasy Theater is gone too? Keel Boats are gone off the "B" and back on the "C". This "B" ticket is Kind of "light" on attractions.... 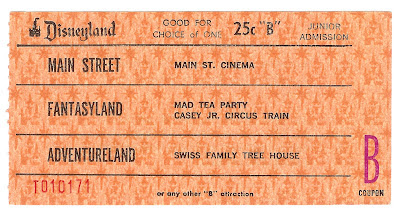 May 1968 finds the "B" ticket back on the warm and wavy Globe Paper, the paper that will continue on the A thru E tickets till 1982. The Motor Boat Cruise is Back! Sleeping Beauty's Castle is back (with an 's now!) I told you she'd be back.... And the Mad Tea Party is gone having spun its way back up to the "C" ticket. 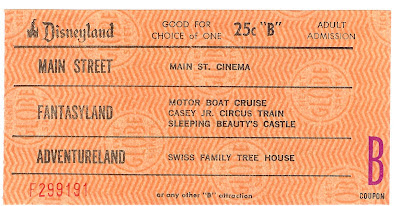 Once again, the Motorboat Cruise is gone, and not on the "C" either, was the ride closed for long periods of its run? This May 1969 "B" ticket is down to four attractions now! 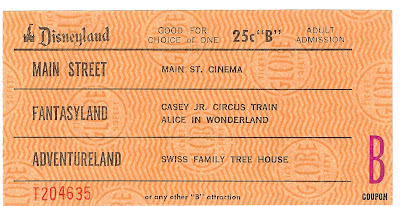 And from April 1970, a nice "B" ticket, notice the color is a little different from the one above. Notice anything else odd??????

Posted by Vintage Disneyland Tickets at 7:16 AM

The Nickel Tour has the story of why the Astro-Jets changed to Tomorrowland Jets. It had something to do with Astro-Jet sounding too much (or exactly) like the name of a competitor of a new participant (Douglas? United Air Lines?).

Thanks for posting all this neat stuff!

American Airlines coined the phrase "Astrojets" and since United Airlines (AA's biggest US competition at the time) was a Disneyland sponsor, the change was made to Tomorrowland Jets. I love all the tickets. The Knotts ticket is extra cool. Thanks.

Cool information, Thanks! I had always just assumed they changed the name in 67' when they changed the ride and put it up on top of the PeopleMover. I am glad you guys are enjoying the tickets!