Lets start off today with a look at the under-rated "A" Ticket. It's not to often someone says "Wow, that was an A ticket ride". However, some of my favorite rides are on the "A" ticket.

Here is the very first "A" ticket. Notice it is for an "A" Ride, the term Ride only lasted a few months. As I hear it, Walt thought the word "ride" was too closely associated with Carnivals and those dirty little corner playgrounds. Side note: I assume this ticket is authentic, however, it is NOT on Globe paper so I can not be 100% sure, but here is my theory. The serial number on this ticket is A08665, that means it the 8,665th booklet sold. With an average daily attendance higher than 8,665 (even in late 55') that would make this one of the first books sold, maybe the first day ticket books were sold (some day in October 1955) Possibly Globe wasn't the paper of choice at the beginning? Anyone know anything on this please share. As you can see on this next "A" ticket (from Early 1956) they changed the word from Ride to "Coupon" sounds more classy doesn't it? Don't you just love these fonts? These specialized fonts for each land will only appear on these early tickets, by late 56' they are gone. These first generation little tickets were smallest of the "A" tickets and measured 3 1/2" x 2". 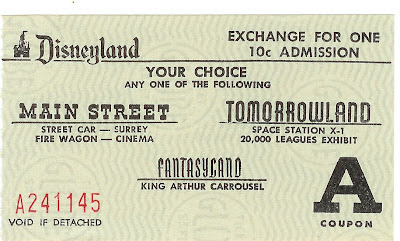 The back of this ticket read: "Good any time during 1956" Disneyland dropped the expiration dates on the lettered tickets sometime in 1957 I think. From 1958 on, the backs read: "Good at any time" 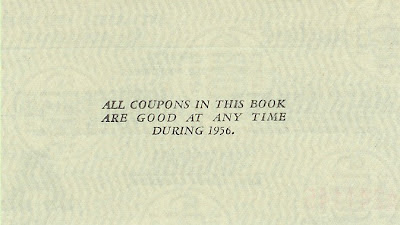 Here we have the "new" sized "A" ticket from Late 1956. This is 4" x 2 1/2" and notice now we have a few more attractions listed; "Street Car" changed to "Main St. Horse cars" and "DMC Horseless Carriage" back still reads "good at any time during 1956". Also, "or any other A attraction" now appears, already planing for future expansion. 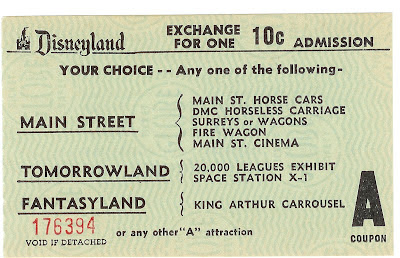 Last up we have a 1958 "A" ticket. Same size as the late 1956 ticket, but a little cleaner style (no more brackets for the attractions in each land) and it's starting to get the familiar blue shade that will stay with the "A" tickets all the way to the end.... Also note the addition of the Omnibus both in Main street and Fanstasyland. Boy would I love to take the Omnibus all the way up to Fantasyland! Here is a great 1958 Omnibus photo from Davelandweb. The back now reads "good at any time". 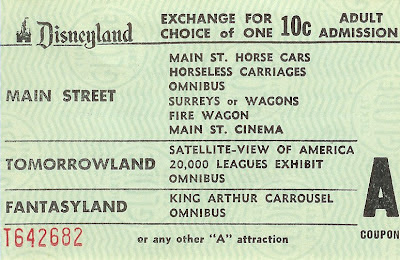 Also, notice by 1958 the wording "void if detached" no longer appears on the tickets. That must have been a hard rule to enforce, and what was the point I wonder?

Posted by Vintage Disneyland Tickets at 6:30 AM

The “void if detached” thing must have been a pain. If we all listen very carefully, we can hear some of those happy guests back in ’56….”Sir, I tore my ticket out by mistake, can I still go on the ride??”, “Mom!, Bobby tore out his ticket after you told him not to!” [Bobby starts crying]