Here's a great set of aerial photos of Disneyland from the 1960's. I would guess 1965 or early 1966 based on the work I see with Pirates and Small World, but its just a guess, its not like a have a compendium to look up such things, ah but I wish I did.

Originally I thought these were the same photograph, with one just being a cropped version. Upon closer inspection it appears these photos were taken at different times, maybe just moments apart as most of the parked cars seem not to have moved, but the Mark Twain has moved.

Here's the close-up version. You can download a high resolution version with the link below. 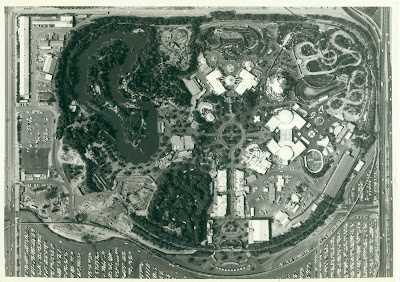 This is the large print and it has lots of detail regarding the surrounding area. Go to Google Maps, type in Disneyland and have a field day doing comparisons, I did!. The park itself hasn't change nearly as much as the area around it. Well, both have actually changed a lot!  You can download a high resolution version with the link below. 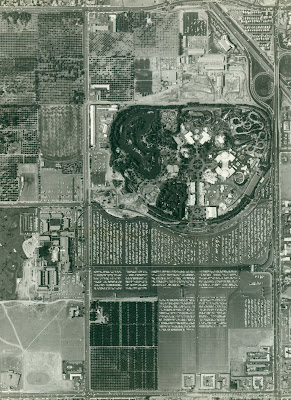 Thanks for the high resolution scans! I really need to sit down with an old-timer and identify all the Backstage facilities.

The scans turned out great! How did you deal with the texture?

Thank you for the high res scans, they really look fantastic.

I really like the first image. You can see the construction of the Pirates of the Caribbean, but what's really interesting is that you can also see that the Haunted "Mansion" is completed awaiting the ride building and the rest of the attraction to be completed.

Thank you so much for the second shot. I love seeing the motels and other buildings around the perimeter and comparing them with a Google aerial shot from today.

I can also see the free standing globe scultpture that used to stand in front of the Global Van Lines building, which is now where the Team Disney building stands. I can remember seeing it as a boy from the car on I5...And that always meant that we were totally close to Disneyland.

I only wish there was a bit more to see around the edges...But I'm getting greedy.

I too would say 1965...why? Construction has begun on the Tower addition at the Disneyland Hotel. This began in June of 1965 and the Tower opened in June of 1966. It looks like they are working on the foundation so I would date this June or July,'65. Also, the parking lot looks pretty crowded like summer time.

I appreciate the time and effort in putting forth these aerial views of Disneyland. I took your advice and started comparing them to Google Earth and boy, what a difference a day makes!

the link seems to be inactive. Any chance you can share the high res links again?