Happy Leap Year Day everyone!  On this weird day lets take a look at what happened when Disneyland phased out its lettered ticket books in favor of the all you can ride "passports".

In the spring of 1982 Disneyland stopped selling ticket books, both the "A through E" type of coupon books and the Magic Kingdom Club ticket books filled with Magic Key coupons (each good on any attraction).  They no longer sold "general admission" tickets and switched to a "Passport" system with "unlimited" use of all the park's attractions.

For two and a half decades people were sold on the idea that Disneyland tickets never expire. While some 1955, 56 and 57 tickets did expire at the end of that year, from 1958 through 1982 nearly every Disneyland ticket had these words printed on the back:

Which was later modified to read:

Thousands, tens of thousands, heck even hundreds of thousands (millions?) of people must have still been holding onto unused tickets in 1982 with the intention of using them one day - well, times up!  Ms. Linda J. from Kalispell, Montana was one of those "ticket holders" and wrote to the mouse to see what to do with her unused tickets or "coupons", here is the reply. 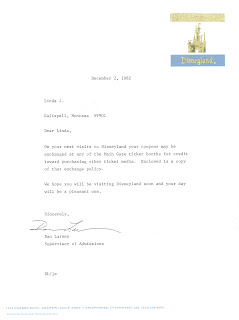 The response seems kind of simple.  Here's the exchange policy, yes its that simple, or is it?


This "redemption sheet" from the ticket booth of the same period shows a slightly more complicated picture. Come back tomorrow for part 2 and see more detail, exemptions and examples on the "simple" ticket exchange program! 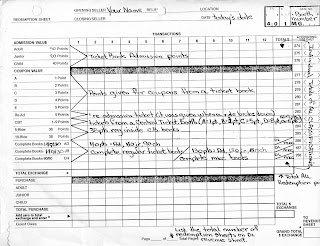 is it really never expire.. its a joke isnt it

I've never been aware of that point system before. Weird. Also I love how they had to get more specific about using the tickets when the park was open; did some jerks actually try to use them "any time"?