Magic Mountain - Trip Report May 2010 - SAVE THE MONORAIL 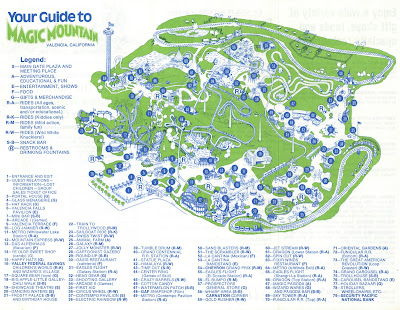 1976 Guide Map
There are no plans to refurbish or restore this classic 39 year old attraction. I’ve heard all the reasons, and yes, now that it’s been sitting for along time it is in disrepair and probably would cost a lot of money to restore. It was announced in early 2008 that the Monorail would not be returning, yet its 100% intact still. Some “insiders” insisted to me that it would all be dismantled by now, I guess they were wrong.

Let’s start with the closest station to the entrance. This is the Whitewater Lake Station and is just across the path from the Log Jammer and the Mooseburger Lodge. The tree growth has covered much of the building and the front has been fenced in, they seem to be storing or using lights in there. 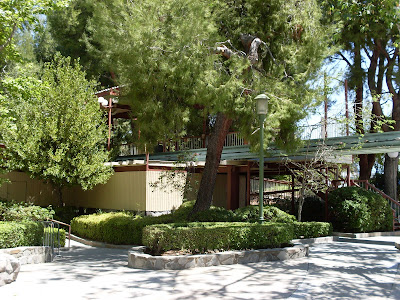 The board-up job looks, well, not so good. 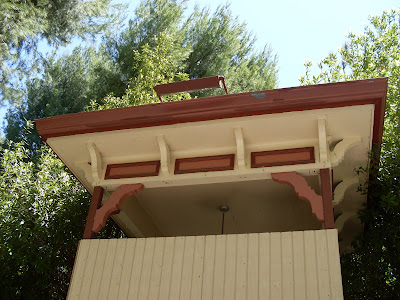 The more I see this style of architecture the more I like it. 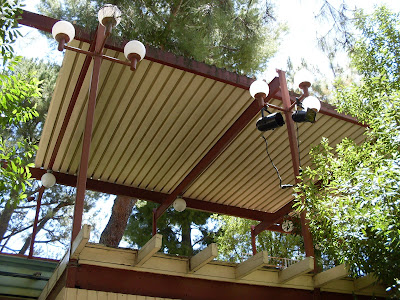 The exit stairs could use some TLC. Nothing has been done since my 2008 visit, zero. 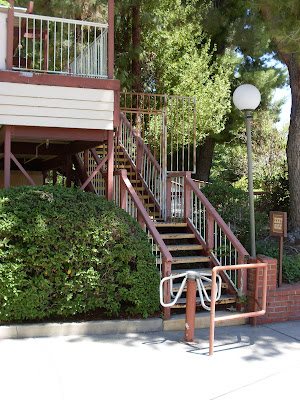 Next up is my favorite of the three stations, the Contempo Pavilion Station. Located just up the path from the board-walk games area, this station is not that far from the first station when you’re on the monorail, but it sure beats walking around the long way. The station has two path ways to access it, this one if from the side of the station. 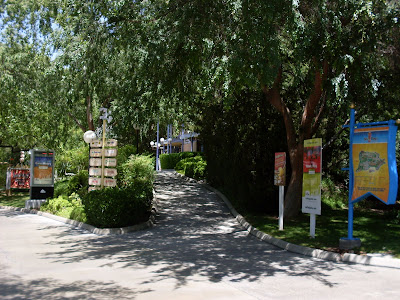 This is such a pretty part of the park. It's quiet because its sort of in between active areas. 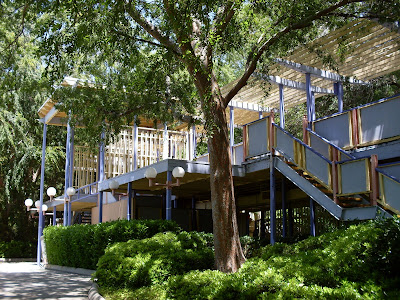 Once again zero maintenance since my 2008 visit. 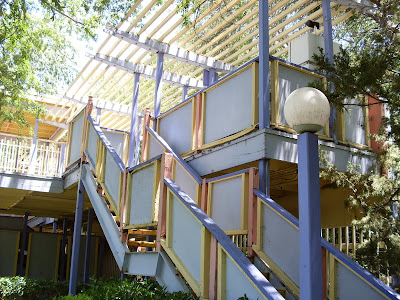 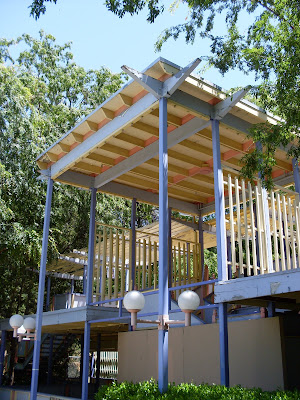 These queue lines are begging for riders. 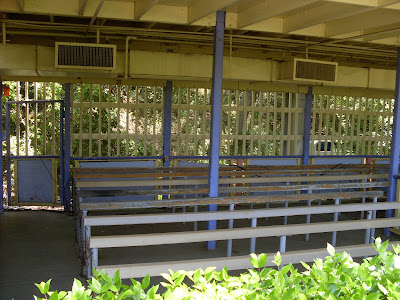 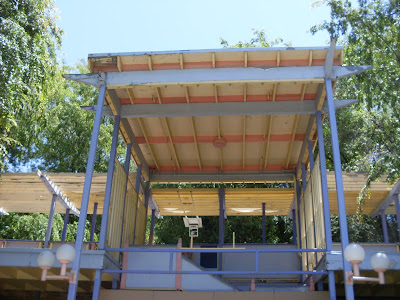 The front entrance, don’t guests wonder what this is for? 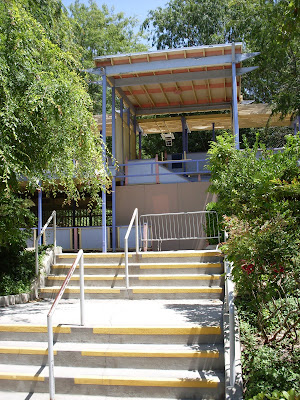 The last station is the Four Winds Station, it’s about ¾ of the way up to the top of Samurai Summit. The station also has two path ways to access it, this one if from upper part of the summit. 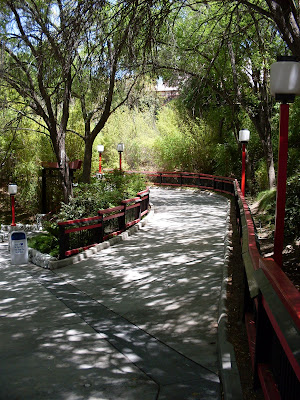 This station was great because it really saved time and sore feet. This was a true Monorail transportation system, it worked, I know because I used it all the time! 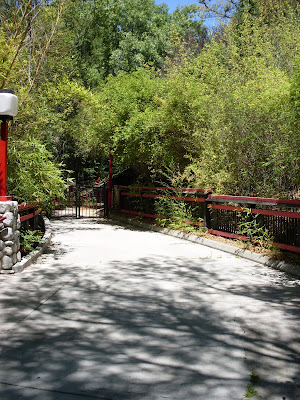 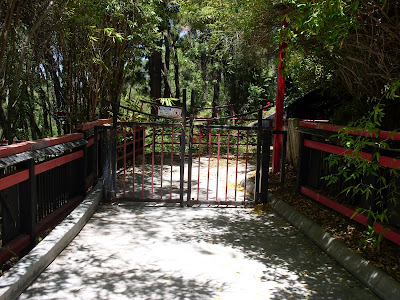 The Four Winds Station loading area is actually in a tunnel, I always thought the stealthyness of this station was so cool. 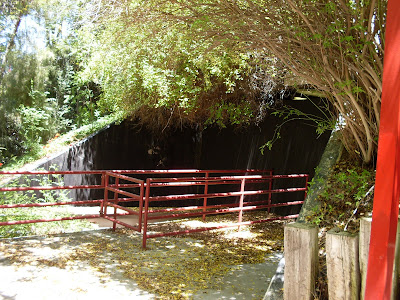 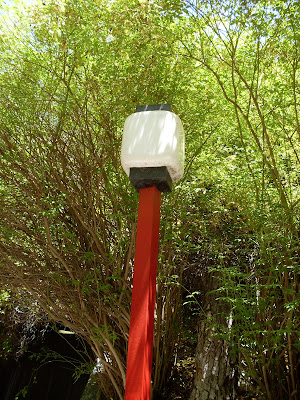 The main entrance to the Four Wind Station is also begging for some guests. 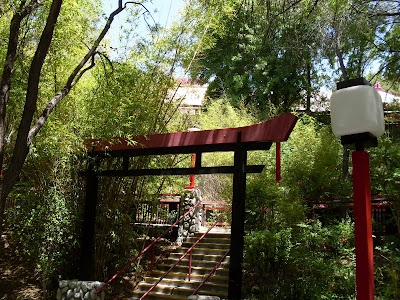 The next few photos show the monorail beam as it traverses the park. You really would think more guests would ask “what’s that for?” 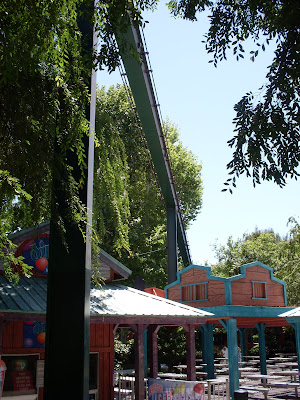 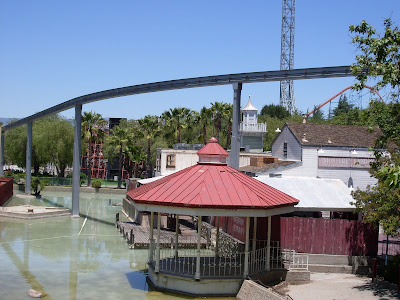 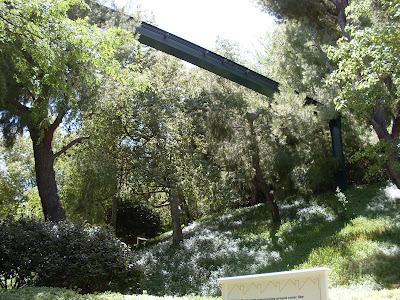 Near the Whitewater Lake Station I found this spur on the beam, this must be where the monorails are stored, let’s follow that spur shall we? 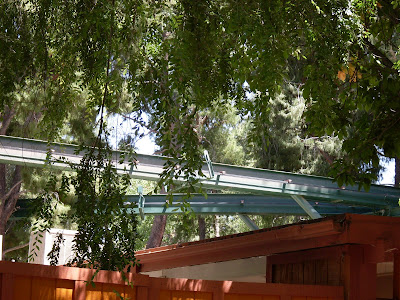 This may or may not have anything to do with the next two photos. 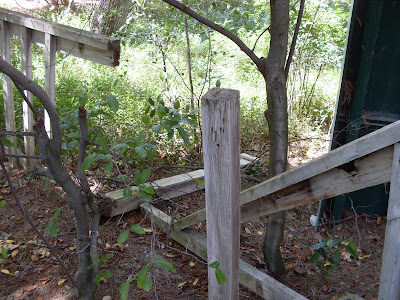 So there they are, complete 1971 Metro Monorails. The guy in the van didn’t even look at me! 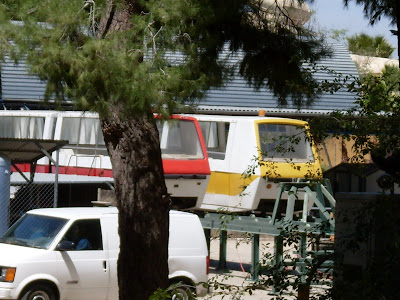 Yes from a distance they look like they are ready to roll. The paint jobs have held up amazingly considering they probably haven’t even been washed in at least 5 years. 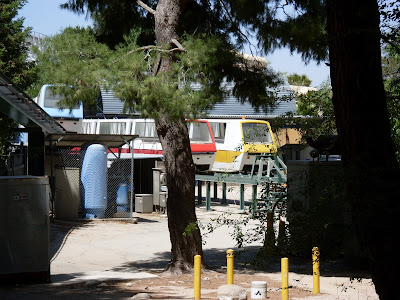 Theme Park Review held its “West Coast Bash” in March of this year and as part of there “bash” they got a tour of the “old and busted Metro Monorail boneyard!” I was hesitant to provide this link (link). Scroll about half way down and you'll see it has some amazing photos, way better than mine, you can even see the running gear (looks fixable to me).
However, the publishers comments are a bit much to deal with “Yes, hi, this is the Metro. Now everyone sit down. Sitting? Good. Now listen up.... IT AIN'T GOING TO EVER F**KING RUN AGAIN!!! DEAL WITH IT!!! GET OVER IT!!! NOW STOP ASKING QUESTIONS!!! EAT MORE OVALTINE!!!!! Oh, I'm glad I've got that out of my system now....” I would almost bet Rob was directing those comments to me! Gee - thanks Rob.

So yes, I understand it’s not coming back, odd that it seems people get a thrill out of other people’s disappointment. Oh well, so far everything is still in place, maybe, just maybe, the folks at Magic Mountain will restore this gem or at least make use of the stations and the beams right-of-way.

I'm with you in that I WISH it were coming back. It'd be great to have. But I think the fact that, as you state, nothing's been done since 2008 says a lot right there. When asked why nothing's been taken down, management replied that it costs a lot of money to tear it down, and that money can be better spent on other projects (repainting rides, repaving, updating bathrooms, etc.). In this economy, I wouldn't be surprised if the beams and stations stayed up for a good time longer.

I don't think anyone's relishing in your disappointment. But after a while, it's like waiting for a balloon you let go of to return to you. At some point, you just gotta walk away.

Thanks Mike N! That does make sense why everything is still in place, there are a zillion of those steel beam supports alone, all cemented in hard to get spots! And in fairness, I can see the money they are spending in other areas - the park looks great, so this is really just a little dream of mine.

Your balloon analogy is perfect. The only nagging part is when I visit the park, that balloon I let go of years ago is following me around everywhere I look!

VDT: Your photo coverage of Magic Mountain is interesting to me since I was only there twice, and that was back in the 70s.

I hear you and agree on the MiceChat posting.

I followed your link to those Metro photos, and have to admit that even though they look tantalizingly intact, they also look pretty rusty. I hate that it is just sitting there not working; maybe if MM had better attendance, they would have seen a need for restoring this ride?

I'm not even going to click on that link you provided. Your photos are more than enough.....thank you for sharing these! I was shocked to see the actual monorails just sitting there. What a shame! And did you break that fence climbing over it to get those shots?

Maybe if Knott's and MM had more family type rides like this they would get more families visiting their parks! Even Disney is guilty of removing family type attractions like this from the park (the PeopleMover, the Skyway, Adventure Thru Inner Space, Nature's Wonderland...) I guess MM could always put a Rocket Rods type of attraction on the old Metro beam and then brag in the advertising campaign that it used to take 15 minutes to ride The Metro around the park, but now you can do it in just 30 seconds! Yes, that was yet another jab at Tomorrowland '98 and yes, I'm still bitter about no longer being able to experience The Metro, The Magic Pagoda, The Haunted Shack, Knott's Beary Tales, the PeopleMover, etc., etc., etc. I WANT MY BALLOONS BACK....ALL OF THEM!!!!

P.S. BRING BACK THE METRO!

I'm with TokyoMagic on this. MM's decision to choose thrills over families hasn't kept Six Flags from teetering on the edge of bankruptcy.

The decay on display in these old parts of the park is sad to see, but fabulous photos as usual! Thanks!

I don't ride coasters anymore so there is not much drawing me to MM. But your photo essay did perk my interest. As I get older, I appreciate the quieter, special, places in theme parks and search them out. There are a few places still like that in DL - and some that are gone like the Peoplemover (without Superspeed Tunnel please). I'd visit MM if I thought it was a place I could have a good meal, a pleasant walk, some theme park history to appreciate and a few fun non-coaster rides for those of us that are starting to get AARP mailings.
Thanks for your excellent site and always interesting postings.

Lots of bad photos on that link, but one is killer: the Magic Pagoda Buddha has been found!

awww, that was my ride. I worked there for a while in about 1998 or so. The state of things are just horribly depressing!

I hear Hersheypark, in Hershey, Pa has purchased the monorails to replace the ones that they are currently using. They plan on having them refurbished and ready to go in the next year or two.