Time for a vintage Knott’s Berry Farm post. Today let’s compare two flyer’s that I originally thought were identical but they are actually one & a half years apart and do have a few subtle differences.

The first flyer is dated January 1, 1965. “Never an Admission Charge” is that a poke at Disneyland?

The second flyer is dated June 1966, the front panel appears to be identical to the 1965 version.

The back panel of the 1965 version showing the Chicken Dinner and Steak House menus, oh boy am I getting hungry! 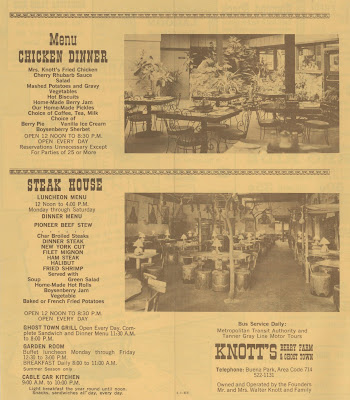 The 1966 version of the menu page is basically the same, but there are a couple of little changes, I’ll let you find them. 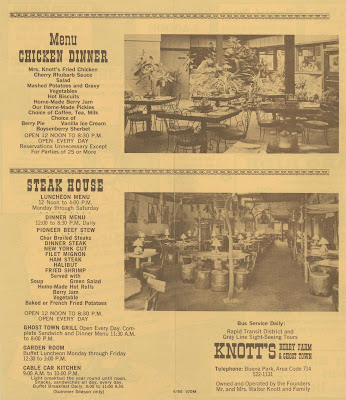 Here’s the big inside panel of the 1965 version. The rides and attractions sure have a haphazard look when arranged this way. I want to feed the seals; I’ll take two bags, buts what’s in those bags? Note the Overland Trail Ride, it’s about to disappear. By the way, that sounds like a great attraction that I know nothing about??? 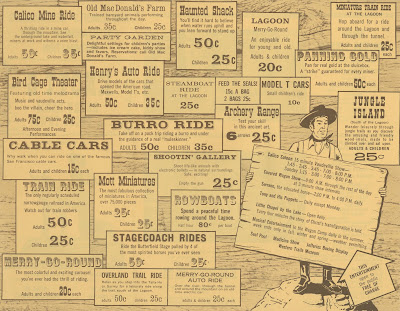 1966 has a few changes; most significant is the addition of Independence Hall. Does the hall occupy the former space of the Overland Trail Ride? A couple of the “children” ticket prices increase from 25¢ to 35¢. 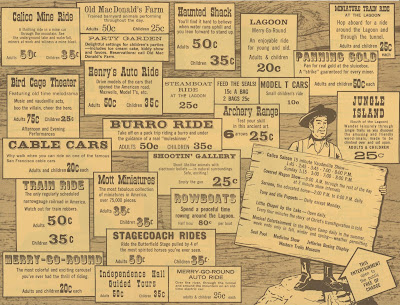 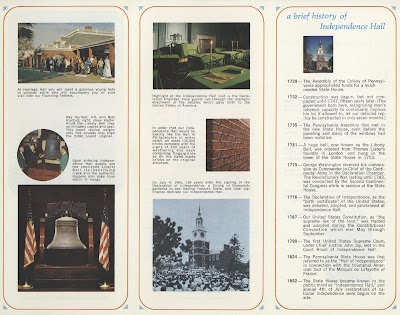 Posted by Vintage Disneyland Tickets at 7:04 AM

Those are some great Knott's items! I just love that page with all of the attractions listed. "Henry's Auto Ride", "Haunted Shack", and hey, there's the "Miniature Train Ride". "Archery Range"? Didn't know about that one. "Jungle Island", awesome! "Mott's Miniatures", the Rowboats - - oh man, I miss the old Knott's!!

In the "E" Ticket Magazine #35, there was an interview with Bud Hurlbut and description and photo of the Overland Trail Ride; Hurlbut explained that a South Sea Island boat ride, similar to the Jungle Cruise, had been planned for the area with the waterways excavated and vegetation planted on the banks; the ride was never completed and the Overland vehicles moved in, travelling over the dry river bed.

When the Ghost Town burros were displaced by the Roaring 20s, I believe they moved to the Overland location and stayed for several years; I wish I had ridden them there, as the landscaping looked very pleasant.

Aaaaha! Thank you anonymous. You have just helped with something that I used to always wonder about. That area next to Jungle Island always looked like it used to be "something." It really did look like a drained "Jungle Cruise." I just assumed that there must have been water around it at some point. I do remember riding the burros after they were moved into that area, but I'm not old enough to remember the Overland Trail Ride.

When I worked there, the burros had been moved out and they had built the "Gold Rush Camp" in the middle of all that vegetation. That was a picnic area that was available for companies to rent, but you had to walk down through those dry river channels to get to it. Knott's also used it for their company service awards and employee recognition functions. It was like eating dinner in the middle of....well again, a "drained Jungle Cruise." Thank you so much for clearing that up!!!