Magic Mountain Construction Photo's 1968 - Before and After - Part 2

Picking up from yesterday's post with some awesome construction shots of Magic Mountain from 1968,  today's first three view-master slides were taken inside the preview center/trailer.

It's hard to tell from these indoor slides but the quality of these models is questionable, but they are so cool I'd die to have them! 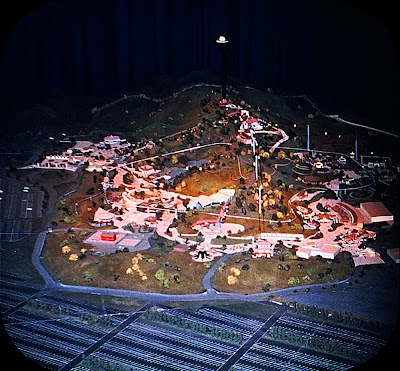 The detail looks a little better in this shot.  I wonder where this model ended up? 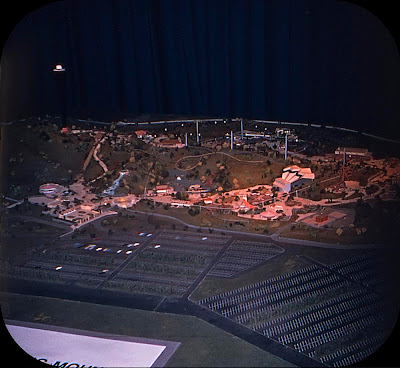 The "Valencia Falls" model is fairly accurate but the lacks some Disney type detail... 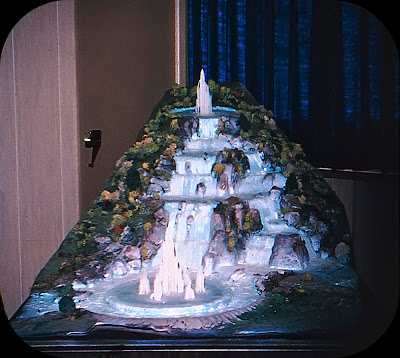 The Valencia Falls still look great, however the orange supports for Tatsu are somewhat of an eyesore. 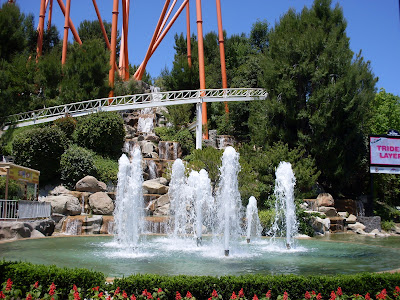 For Today's Before and After post let's focusing on the area just to the right of the Falls and the Carousel. Most of this area is (was) covered by Whitewater Lake and the parks original signature attraction the Log Jammer.  We'll get to the Log Jammer in a minute. First lets take a look at the "Sugar Shack" located in the lower center of the cropped section from the 1971 park map (link). 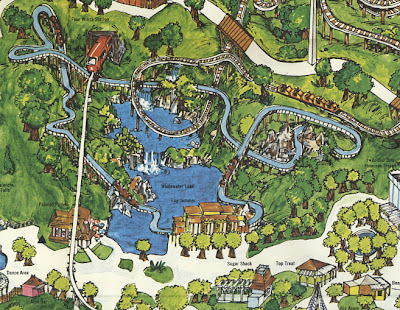 When I first viewed this view-master slide I had a tough time identifying this little building. There's a huge artificial tree to the right of it today and the Mooseburger Lodge is snug against it on the right side. However, this is most certainly the "Sugar Shack". 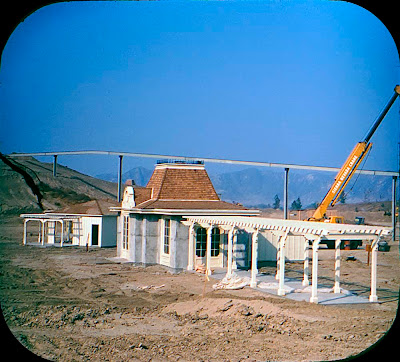 Now part of "Sierra Territory" the little building has been renamed "Sierra Treats".  It lost the covered entryway on the right and the building on the left is now that huge tree. However, this little gem of a building still stands proud and looks great. 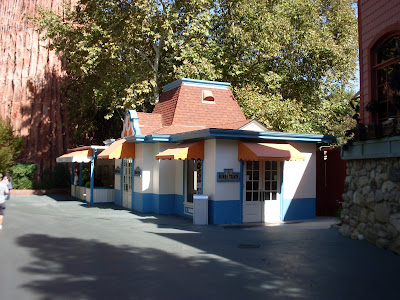 I had a nice chat with an older lady working inside, she was thrilled to see the "before" photo (of course I brought it with me!). She said she remembered when it was the Sugar Shack! 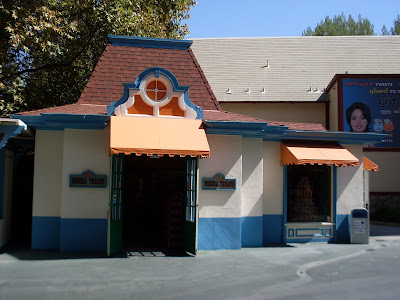 And naturally they still sell lots of SUGAR! 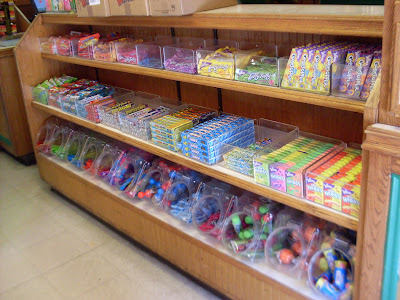 It is with great sorrow that I post the loss of the Log Jammer.  The photo below is from November 2011, the attraction had just closed a few days before, closed FOREVER...  The building is still there today, but the "Log Jammer" sign is gone and then entire flume system is gone.  According to my new friend at the Sugar Shack, a new attraction, Full Throttle (link) will cover the entire area of the Log Jammer and more. The "Whitewater" Metro Monorail station that was just across the path from the Log Jammer has been removed (RIP Metro) and I'm told it that area will be used for Full Throttle as well. 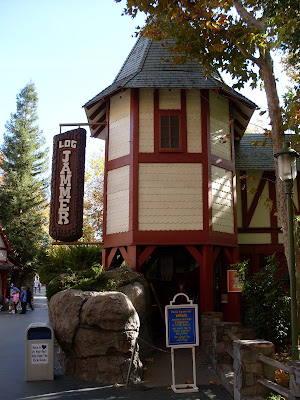 This 1968 view shows the main area of the Log Jammer, that's the tunnel and beam for the Metro Monorail. 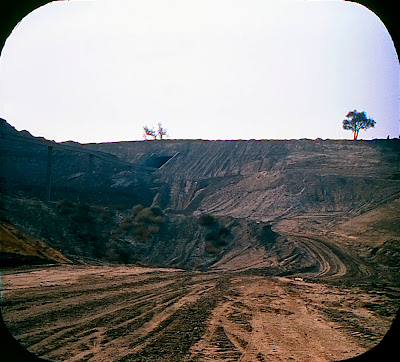 Ironically this shot taken September 26, 2012 shows the area has come full circle,or even backwards as the Monorail beam is now gone. 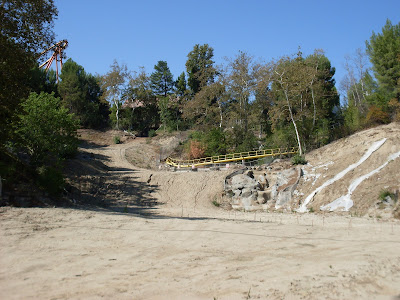 This photo taken in November 2011 show the last flume drop, monorail beam and part of the Whitewater Lake. 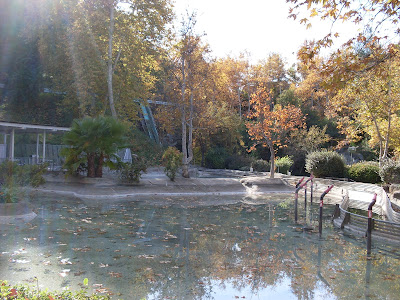 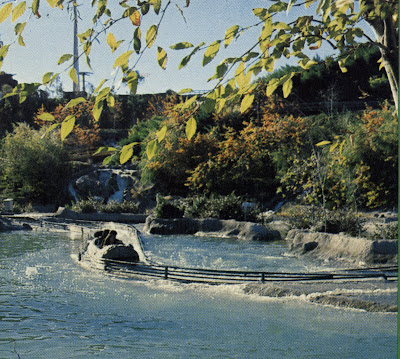 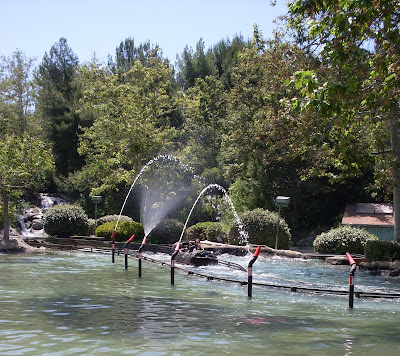 This September 2012 shot was impossible last November, I'm standing just to the right of the queue building.   The lake and flume tracks are all gone (along with several mature trees).  I was temped to go knock down all those little marker sticks, but I refrained. 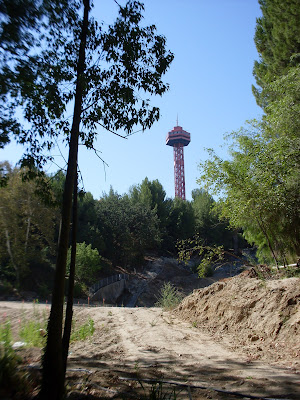 Lets take a look back at much simpler time at the Mountain.  This early 1970's overhead tower shot shows the entire layout of the Log Jammer, it does sort of lend itself to a roller coaster I suppose.  Notice the HUGE towers for the Eagles Flight skyway (yikes) and the long gone foot path down the front side of the mountain (Superman - The Ride is there now). 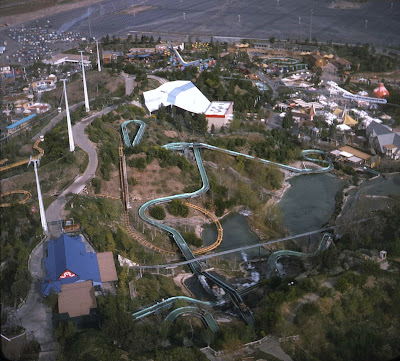 My oldest and fondest memories of Magic Mountain are riding the Log Jammer with my Grand Parents in 1971. I was scared and thrilled, the first drop was exhilarating  but the last drop (shown below) was my first real rush of speed - I miss my grand parents and now I miss the Log Jammer too... 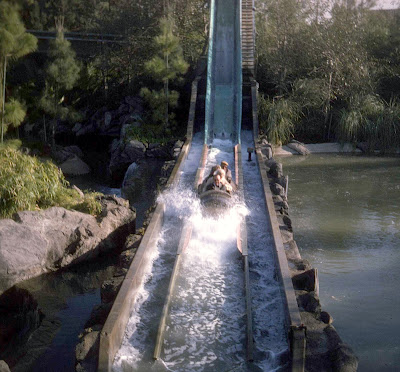 Last view-master for today's post.  There's no way to get an after photo of this.. I do see some monorail beam in the background. 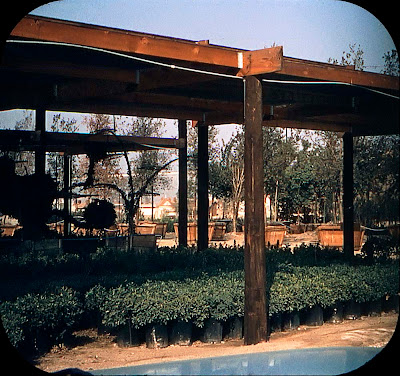 Come back tomorrow for part 3!
Posted by Vintage Disneyland Tickets at 12:01 AM

Yet another excellent MM post! I'm glad you are doing these, because I would have done a terrible job presenting them. "Here's some building". "Here's a pile of dirt".

I loved the Log Jammer, it bums me out that it is gone. Is the Gold Rusher still there?

I am loving the before and after pics, but it's very sad to see more destruction. Too bad the owners of Magic Mountain don't care about the park's history. I bet the Log Jammer still had plenty of people wanting to ride it. If they were going to remove a flume ride, why not take out the Jet Stream which was not an opening day attraction. Everything does NOT have to be a roller coaster! Or maybe it does and maybe I'm just not their target audience anymore. I want my balloons back.....all of them, darn it! :-(

Wow! Have never seen that particular model before. This is great stuff, Tim. Thank you.

Wonderful function. And also remarkable choice of instruments to be effective... Fantastic!!

I am loving the before and after pics, but it's very sad to see more destruction.