Welcome to Souvenir Saturday! Now that I’ve expanded my storage space for the blog, we shouldn’t have any further interruptions.

Dell’s GIANT Comics – “Walt Disney’s Donald Duck in Disneyland”. Dated 1955, the content is defiantly pre-opening as some of the artwork doesn’t match the actual park.

The Front and back covers are stunning. This type of artwork really catches my eye, I could gaze at it all day long. 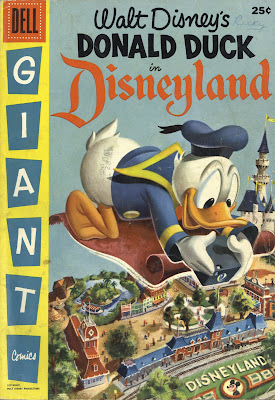 The back cover is even better than the front. I like the way they moved stuff around so everything fits in the scene. 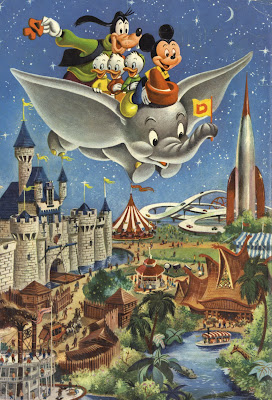 Inside the front cover Donald points out some of the “wonderful things to see and do at Disneyland”. (4) Rocket Pylon – TWA not signed on yet? (9) Mad Tea Party Ride – I guess there not “cups” yet? (15) South Sea Island Village – Adventureland? (16) Log Fort and Block Houses – What Block Houses? 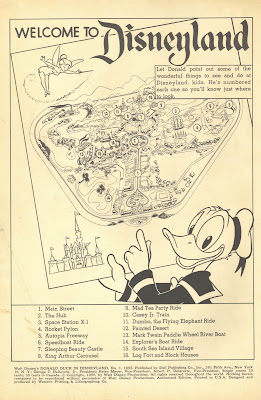 The comic book starts of with the whole gang showing up at the main gate because Mr. Disney thought they should have a “special preview before the park officially opens”. 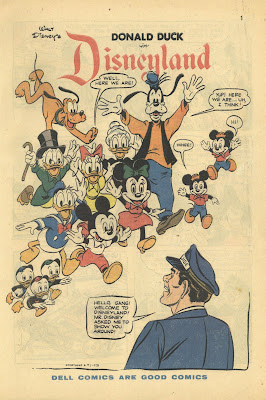 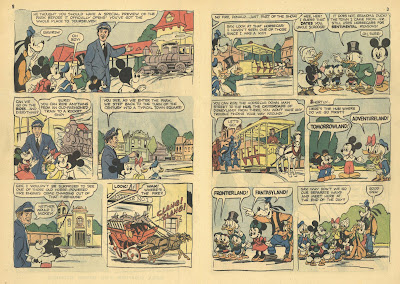 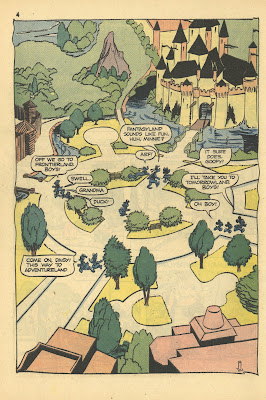 After they separate at the hub, they visit each land. Most of the stories digress into typical Dell comics stuff and the stories don’t really talk about Disneyland.

In Adventureland Donald Tells Daisy a story of when he went to Africa and of course Daisy doesn’t listen because she is so into the ride! 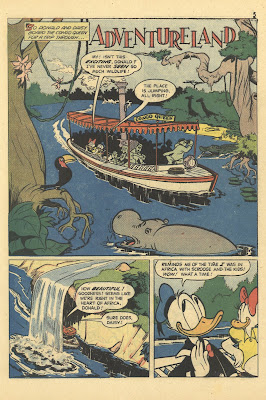 Tomorrowland takes Mickey, his nephew Morty, Niece Ferdie and Gyro Gearloose to the moon, with trouble from Pete and Skrugg! 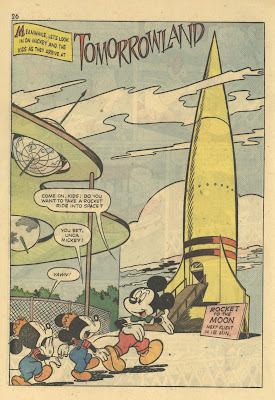 Frontierland tells the tale of Davy Crockett and Georgie Russell, not much Disneyland in this section. 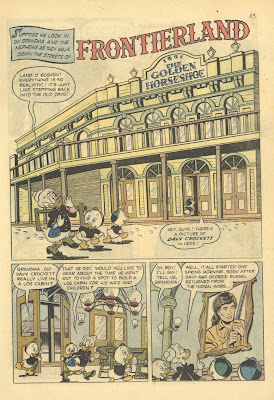 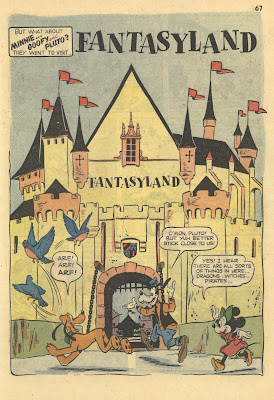 As the day ends the gang meets up again at the hub. Uncle Scrooge missed all the fun, but read on and you’ll see he still had a great time! 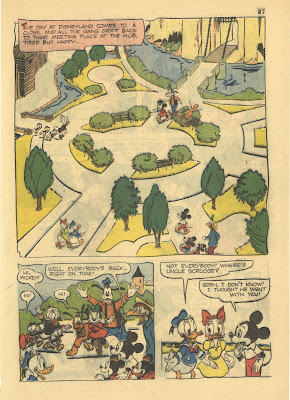 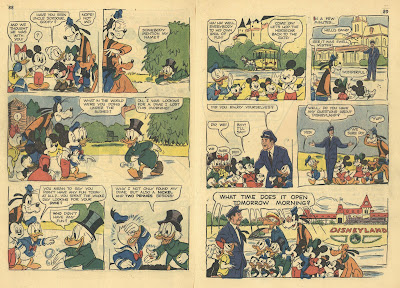 My favorite panel from the comic book.

Posted by Vintage Disneyland Tickets at 6:39 AM

Absolutely fantastic Tim. Thanks again for all.

Any way you could be convinced to post the entire comic, cover to cover? I'd hate to miss out on all the puzzle pages and stuff. I have a soft spot for those. Thanks!

A "Blockhouse" is a type of fort (Wikipedia will tell you more than you want to know...) so it's use here is not correct, but since this is basically an advertising piece that's meant to excite rather than inform, the copywriter is probably referring to the rifle towers at the corners of the Fort Wilderness.

This is verrry nice! I am not only going to tell you what you want to hear, but I am also going to tell you the truth! This honestly is really beautiful. To some people even the smallest things can mean the most to them. Sometimes they also say one mans trash is another mans treasure, funny how that works. But this right here, is most definitely a piece of treasure that should be kept in a safe place so it doesn't end up in the trash. But no worries, even if it does end up in the trash, it will Most Definitely be another persons treasure because anyone and everyone can find all kinds of their own definition of beauty in here :)

Wow! That was quite the story telling! Im quite amazed at all the things you've done! No wonder your soo happy! Well I hope you had your fun and excitement.

Saving this to my reading list (you gotta love the new Safari feature on iOS 5!). Great post.... P.S. Happy Friday, everyone :)