The Wonderful World of Wizardry December 19??

Here’s an interesting two sided undated (boy that drives me crazy!) flyer. One side depicts an “Extra Special Holiday Attraction” presented by Mickey Mouse himself it’s “The Wonderful World of Wizardry”. A Google search doesn't find much, I’m not even sure what was all about, but what ever it was they did it 15 times daily! 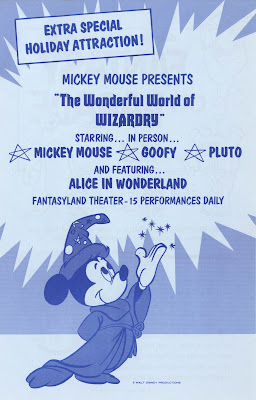 The other side is all about the “Fantasy on Parade”. Although the condition of this flyer is excellent, its must be fairly old since the parade route goes into Indian Village which was taken out in 1971 to build Bear Country (Yesterland: Link). 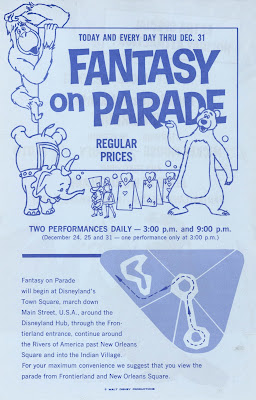 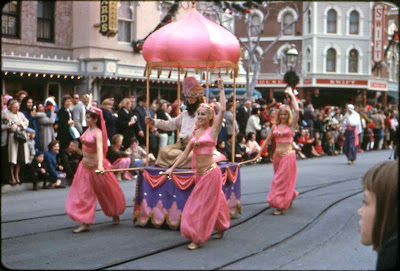 In case you didn't know, Fantasy on Parade had it’s Gala Premiere on Saturday December 18, 1965 at 8:00pm, I have an original ticket to prove it, check back on the 18th of this month to see it.
Posted by Vintage Disneyland Tickets at 12:01 AM

The show was a magic show in the Fantasyland Theater in 1967, where Mickey Mouse, aided by Goofy and Pluto, performed magic tricks, with volunteer Alice.
This was the first time the Disney characters appeared in a theatrical stage performance.

Wow, very cool that a reader knows when and what the show was! I was going to throw in some general thing like "Between 1967 and 1971", ha ha.

A minute or two of searching (two searches, actually) found me this at http://www.mouseplanet.com/9642/The_Osmond_Brothers_at_Disneyland

Speaking of early Disney Entertainment history, someone—are you reading this Didier Ghez?—needs to interview magician Mark Wilson who, to the best of my knowledge, produced the very first live Disney character stage show at Disneyland. It was a show with Mickey Mouse as a magician in the Fantasyland Theater and debuted the Christmas season of 1967. It featured Mickey (attired as the Sorcerer’s Apprentice) with assistants Pluto and Goofy doing magic with Alice in Wonderland—since she was not in one of the clumsy fur costumes so could be used in some of the traditional girl assistant tricks. Called the The Wonderful World of WIZARDRY, it was a 20-minute show performed 15 times a day! It effectively demonstrated that the character performers could do a stage show. Wilson also has stories about working with Ward Kimball on the traveling show Disney on Parade.