Wouldn’t it be fun to be a “Courtesy Guest” at Disneyland? They always seem to get free tickets!!!! This 5 Adventure Courtesy Guest ticket book is from October 1966.

This book is special in a few ways, first it was never used. The tickets are wonderful and printed on the somewhat rare “castle & star” paper as opposed to the usual "Globe Safety" paper. And the most special thing about this ticket book is that it’s the last one that has Walt’s stylized signature on the Welcome sheet. By early 1967 the message would be from “Walt Disney Productions”

Magic Key tickets were magic indeed, good for use on any ride or attraction in Disneyland!

I could stare at this paper all day long, heck sometimes I do…

A somewhat abbreviated attraction list. No “New Orleans Square” yet and the New Tomorrowland ’67 was just getting ready to be built so all the old attractions were closed.

This post needs some color, from the November 1966 issue of The Disney World. Sorry to bring the holiday's to you so soon, but it was the closest I could get to October 1966. 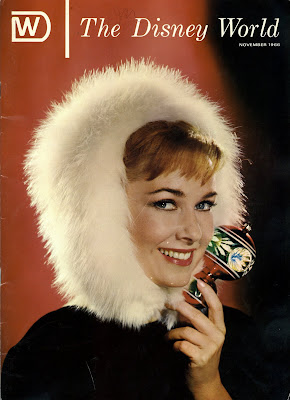 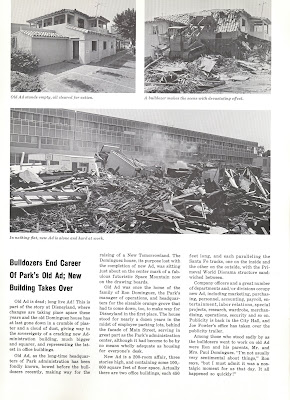 Come back on Bonus Sunday for the entire November 1966 issue of The Disney World.
Posted by Vintage Disneyland Tickets at 6:37 AM

Tim, that is the issue of "The Disney World" that you can see on Walt Disney's desk (preserved the way it was when he died). I think I sent you a photo of it a while ago, but it's easy enough to find if you don't have it.

Very neat tickets today. Nice to see that the designs are completely different from the "stock" ticket, not just some dorky overstamping.

That's Vera Miles on the magazine cover, isn't it? She was an excellent, underrated actress and was great in two of my favorite movies - The Searchers and The Man Who Shot Liberty Valance, both John Wayne flicks (and mega-classics). She later did stuff for Disney, of course, like Those Callaways. Cool!

Yup - That was Vera Miles. One of the many ice blondes made famous by Hitchcock. Great post as always.

I love the second story porches of Old Ad.

My friend's mom passed away recently. When she was going through her things she came across some US army Ticket passes, dates October 27, 1967. I have pictures of them, but I don't know how to post them here.....