Looks Like We Started Something! - Disneyland ’86. I’ve heard a story about how some cast members altered the slogan to “Looks like we stepped in something”! The graphic of Mickey does look like he is about to step on “something”. This Golden Passport is on thick paper and almost feels like a real “Golden Ticket”, OK maybe not, but it shines pretty. 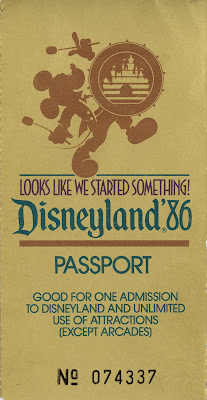 Looks like we’ve got a Complimentary ticket here, NOT FOR SALE, nothing to see here, keep moving. Interesting that this passport may not be used on the day it was issued, but otherwise appears to never expire. I suppose the missing stub portion could have an expiration date, something else I need to find out! 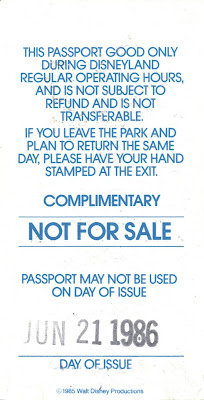 Here’s the colorful cover to a press package for the big “something” promotion (what did they start, Something to Celebrate maybe?) The press kit is missing the information sheets, which is too bad, they are always fun to read. I have more from other years, stay tuned. 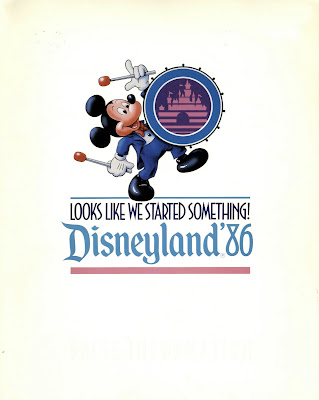 The press kit does include the great black & white press photos. All kinds of wonderful things coming to the Magic Kingdom in ’86; Captain EO would come in September and Star Tours would wait until January 1987. 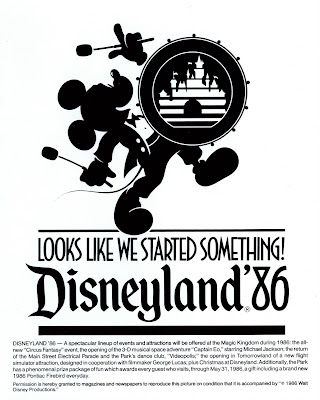 “The prizes keep coming” They gave away a 1986 Firebird everyday thru May 31st! That a lot of Birds! Hey, that family of five is going to have to leave one of those kids at Disneyland, Firebirds only seat four. I say leave the little girl with the fashion violation suspenders! 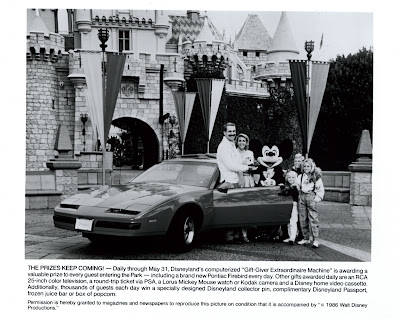 As stiff and uncomfortable as the Country Bears look I’d take them back even dressed up like this. 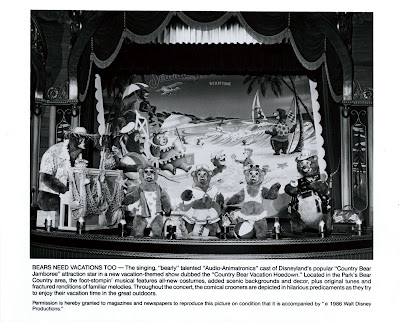 Same for Videopolis, I’d take it back too; everyone get their Guess jeans ready, let’s evict the little princess’s. 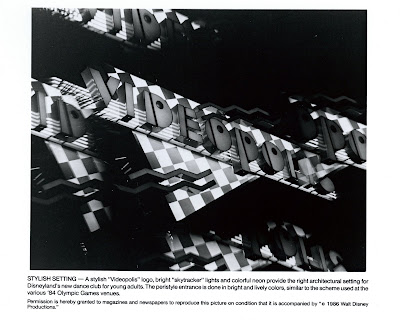 Hey, Disneyland can use this same photo and text next year, just change the dates. 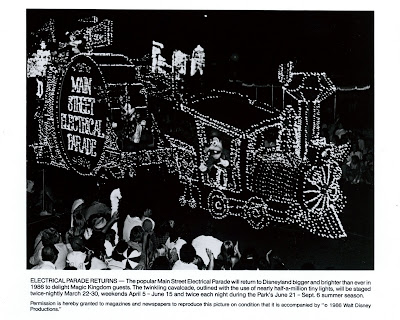 Circus Fantasy. There was a reason Walt got rid of the Circus at his park, why did they try to bring it back? 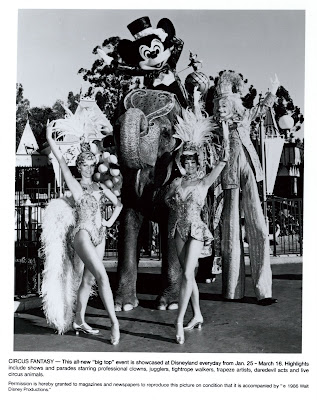 All photos are: © 1986 Walt Disney Productions
Posted by Vintage Disneyland Tickets at 12:08 AM

Oh my god, what is UP with that Country Bears photo? I've heard of the "Vacation Hoedown" but didn't know anything about it (and thought it only ran in Florida?). I actually kind of wish I had seen it, it's such an oddity!

Vacation Hoedown was a little weird. I loved the original CBJ show and the Christmas show....but yes, I'd even take the Vacation show back if we could just get rid of Pooh!

Major, I unknowingly stumbled into the Vacation Hoedown and was traumatized for years, but I would take it back over Pooh!

TM: "You're my obsession" thanks, now thats going thru my head all day! Firebirds have a tiny trunk/hatch back area, but I think the suspender girl will fit!!!

I've got a unused Golden Ticket with the original stub attached. No, there is no expiration date on the stub. Respond to this comment if you'd be interested in purchasing it.

My wife got it as a random giveaway at the turnstiles on May 29, 1986 and has kept it in her "treasures of trash" found it the other day and thought it was an interesting find.

i won a firebird on 8/10/1986. i have the original gift certificate and ticket stub framed since then. signed by both Mickey and Minnie and dated with my name on the certificateall in the same blue ink and hand-written. mickey's and minnie's signatures are distinct from each other. what is the worth of something like that. all in pristine exellent condition. very nice white frame. bottom of gift certificate (gold lettering) has the number 000257...top of certificate has the mickey pic you show and the sentence "looks like we started something" disneyland 86. any feedback is greatly appreciated.

The 86 Gold Passport ticket was a give away ticket. Every so many people entering the park would get one and that is why you couldn't use it on the same day. I have one with the admission stub still on it.

I also have a complete Magic Key ticket book with all 11 tickets, but the admission ticket is missing 9/79. I have a A-E ticket book dated I believe 9/79 which would be one of the last ones. It is missing a few tickets. And have several other incomplete books.

I have 2 Disney Dollars from 1993.
Trying to sell the whole bunch.

I also have a Gold ticket issued July 12, 1986 with the stub attached. Anyone know if it is sellable? Or still useable?

So I actually have the original tickets with the stub and they do not have an expiration date. My dad has had them since our last family trip in 1986. I'm not sure if they are still valid, but the bottom portion says not valid if detached. I just called them and they can't validate them over the phone, so when I'm there next month they are going to look at them.

@Elizabeth Love, did you ever find out if it was valid? My Mother-In-Law also has one from Jul 18, 1986 with the stub still attached and we're curious if it'll work since there's no expiration date. Thanks!