Welcome to Disneyland's Grad Nite Party June 1962.  Grad Nite at Disneyland started in 1961, however I’ve been unable to find anything from that first year. It seems as if the “paper goods” started in 1962. If anyone has any Grad Nite 1961 paper stuff, please let me know.

So let’s start this June Grad Nite series in 1962! From my very own personal collection (no I was not at Disneyland in 1962!) this Grad Nite Party photo and holder belongs to none other than my own mom and dad. 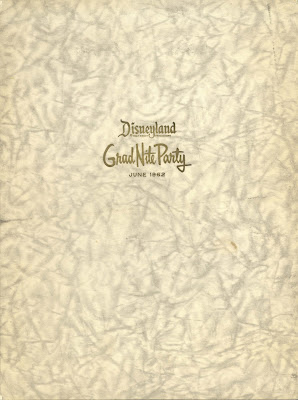 It’s hard for me to believe it, but my mom is only 17 in this photo, while my skinny dad is 23 looking all of 12!  My mom has no recollection where in the park this photo was taken or how in the world she walked around the park in those shoes! My dad does recall being highly embarrassed having to ride a school bus to the park while he left his ’57 (turquoise blue) Thunderbird parked at home. Check out the happy couple at the park 8 ½ years later, now “married with children” (link). 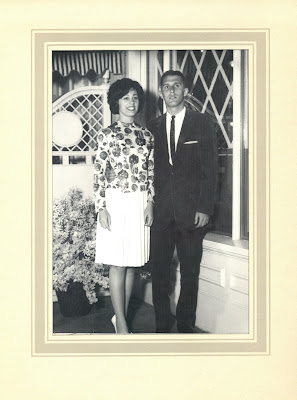 Just the other day Disneyland had its 5 millionth Grad Nite Guest, wow (link),

The rest of this post if a repeat from last year, but it fits with the 1962 Grad Nite Party Photo. Buena Vista Records proudly presents “Grad Nite at Disneyland 1962 with the Elliott Brothers Orchestra”.  1962 Grad’s are having a blast on the cover. The paper sleeve has that fun textured feel like an oil painting on canvas. The songs for the 45rpm record were “extracted” from “Date Nite at Disneyland with the Elliott Brothers”. The 45 has a black label on a black record, so the scan came out so-so. Two parts for your listening pleasure today. First, “That’s All” This recording on my digital camera does not do the audio justice, the bass is rather deep and the overall fidelity is remarkably good for a 46 year old record.


Second up is “Goodnight Sweetheart” this is neat because at the end one of the Elliott Brothers introduces the band members and thanks everyone for being at Disneyland, fun stuff.

Posted by Vintage Disneyland Tickets at 12:13 AM

What a handsome couple! I have that record too (and no, I wasn't around in 1962 either....from what I remember, you and I both graduated the same year.) Thank you for sharing your family photos!

I believe that photo of was taken just outside Carnation Ice Cream on Main street. Those look like the windows, and the trellace that separates the eating area outside. The front door would be just to the right. Nice pic.

Such a great photo of your parents before they were your parents! Now we know why Disneyland is in your blood.

I am sending you a scan of the 1961 ticket and the give away autograph album from 1961. I also have the program from the 1962 party I will scan for you.

Thanks for the photos. But different from the rest of you I was there that night. Still remember those memories. I was also lucky to go to Disneyland the year it opened in 1955.