Welcome to Magazine Monday. Today is Magazine Potpourri day, four short vintage Disneyland articles that have no magazine attached. I would prefer to have the entire magazine, but at least we’ve got the main part!

First up, the only two page article today and it’s from Popular Mechanics, December 1954. That's the early map that is way off, but super cool to gaze at… Hey, who is that pointing at the Mark Twain? The park will be “Open for inspection next May” – close. 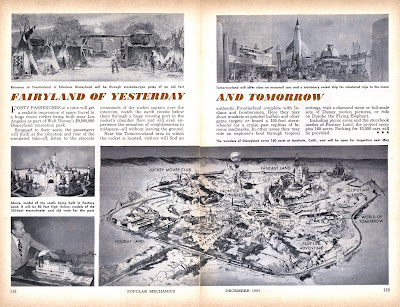 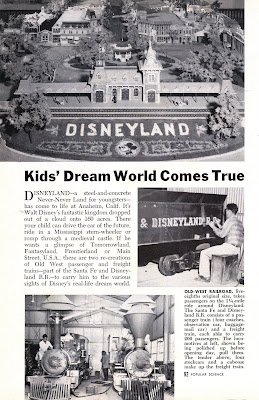 This article should have been posted yesterday to celebrate the 50th anniversary of the ’59 additions to Disneyland. From the July 1959 edition of Popular Mechanics. 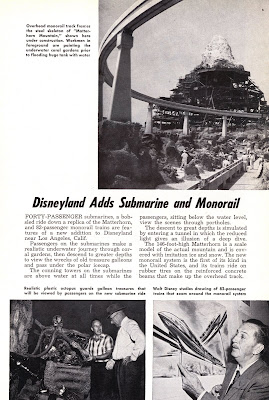 “Disneyland Extends Monorail”. From the April 1961 edition of Railway Age. 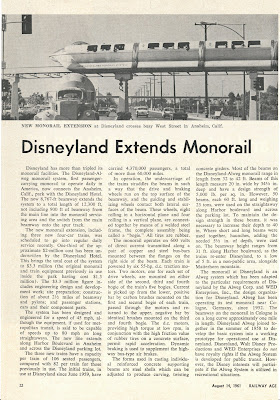 From an unknown & undated magazine, this advertisement if for the Prescon Corporation and describes how the tower for the Disneyland Hotel was built. Did they let guest in the first two floors while the other nine were being built? How did that work out?


This post needs some color! Another undated advertisement, most likely from 1956 or 1957. Insurance by North America (INA), be sure and visit their Information Center at Disneyland. 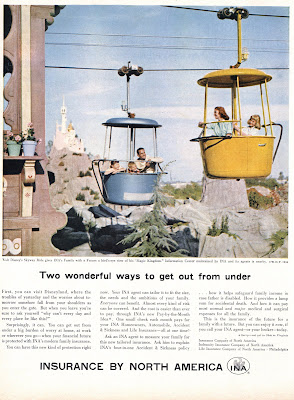 This advertisement is on the back side of the INA page. Why do desserts from the 1950’s always look so yummy??? 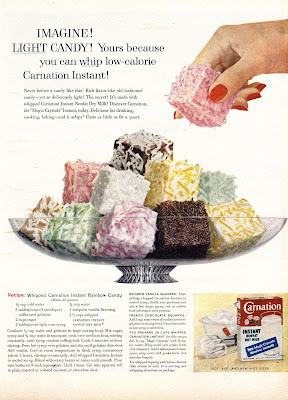 Whoa! In that second pic/page...the one from Popular Science 1955...is that International Street in the upper right corner of the Town Square model? And it looks like there is also something in the backstage area in the upper left hand corner as well....Liberty Street?

Like you, I am wondering who that is showing off the model of the Mark Twain?? It's so odd that it isn't Walt himself.

I also wonder if there was ever any serious thought to having some sort of hot-air balloon ride, since you also see one in Peter Ellenshaw's famous painting.

I've often wondered why they moved away from the free-form shape for Disneyland shown in the early drawings and settled on the familiar rounded-triangle footprint.

Did somebody feel the serpentine RR tracks would have been too expensive? Did the free-form shape make for too many problems with space utilization inside the park?

Did the rounded-triangle shape come from Walt himself, or was it presented as a solution by the staff? If so, who?

We additionally question in the event that there is actually any kind of severe considered to getting some kind of hot-air go up trip, because you additionally observe 1 within Chris Ellenshaw's well-known piece of art.