Welcome to Bonus, this post is a little late, but better late than never. Following up on Friday’s Magic Mountain post, today we’ve got the entire “mini-postcard” book from the early days of the Mountain.

A couple notes regarding Friday’s post. The Das Alpenhaus is located directory across from the Log Jammer entrance, it’s a “moose” type lodge now, pretty much the same on the outside. Not sure what I was thinking to “donate” that vintage menu, I’ll consider a “loan”. Jed, the tower was closed on my last two visits also!!!

(Warning: Save the Metro Monorail rant) Regarding the Metro Monorail; “jestermn” claims: “Management has said many times that although they'd like to have the Metro back, it's not economically possible to do so. It will be fully dismantled in the next couple of years.” If management wanted to, they could. “Not economically possible” just means they would rather build another coaster, I bet I could restore the Metro for half the $$$ Terminator costs to build. There are two of these identical monorail systems still in use, one at Hershey Park, PA, and I believe the other is at Six Flags over Georgia. Somehow those similar size parks keep their Monorails running. Magic Mountain NEEDS a transportation system. As much as I love the PeopleMover and would like it back, it didn’t actually take you anywhere, the Metro did! Regarding the bankruptcy, I can't see them spending any $$$ to restore it now, on the other hand, it won't be cheap to remove it either. 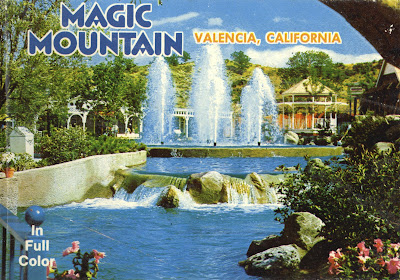 The photos are in no particular order; except that I put all the Metro Monorail ones first! 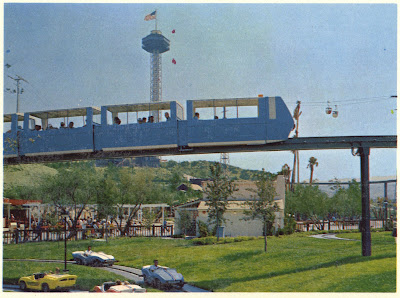 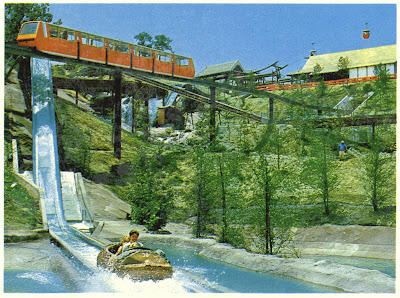 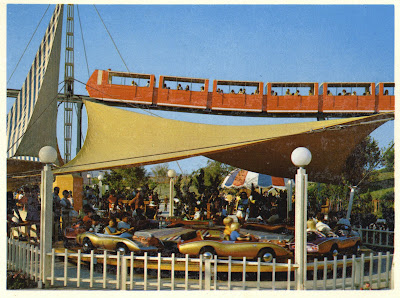 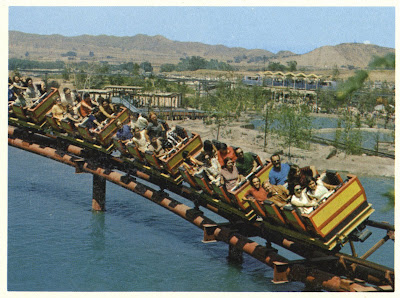 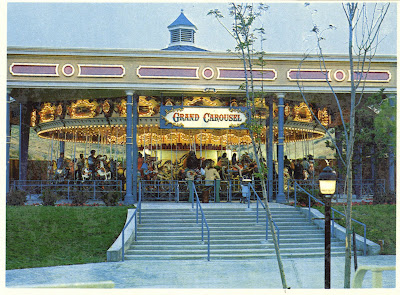 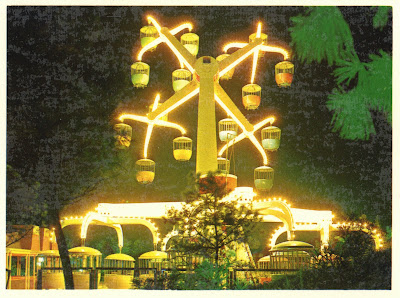 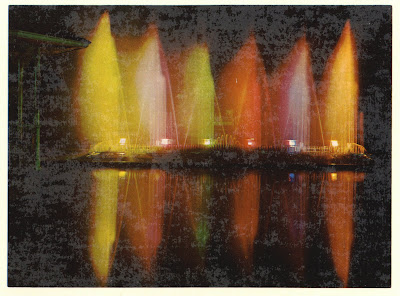 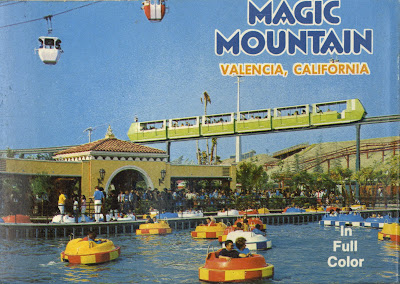 Fascinating, Universal Mobility was the manufacturer of the Metro Monorail:
"California Exposition People Mover (Sacramento): System Upgrade Evaluation. After 27 years of successful operation of this Universal Mobility, Inc. (UMI), monorail system at the California Exposition in Sacramento, California, the system was in need of an update and retrofit of various system components. LG, in association with Creative Technology of California, was hired by the Exposition, to evaluate the system, prepare an evaluation report, and make recommendations for system improvements, including conceptual drawings. The first two phases of these improvements were then completed.
Phase I System Design. LG and Creative Technology designed and built a specialized self contained power rail cleaning vehicle to perform the heavy maintenance of the power rail. The four-rail power rail cleaning system successfully cleaned the 6500 feet of track in time for the opening of the Exposition. LG staff performed site inspections and prepared the improvement implementation plan to upgrade the system." (link). I guess it WAS economically possible after all....
***************UPDATE***********************

Hi Jester, thanks for taking time to address my “cause”, I do appreciate all the information and being taken seriously. Was a cost to refurbish the Metro given at the ACE events? Tatsu cost 21 Million, Terminator the ride cost 11 million. I would think you could refurbish the Metro & the stations for well under 11 million, probably half or less. The entire ride system is still there, yes it needs major work, it will require some fabricated parts, tons of labor for neglected maintenance and some retro-fitting. Give me 5 million and three months, I’ll have it ready and 100% operational.

As far as an ad campaign for the “New” Metro, that does sound silly. However, if you tie it into an entire “themed” campaign, it makes much more sense. I’ve been bouncing this idea around in my head for a while and I know the park is trying something along these lines, but so far it’s a weak attempt, here’s my idea:

Magic Mountain re-introduces true “Family Entertainment”. (That is how the park opened and became successful) By utilizing the under-used “top of the mountain”, they don’t even need to build any new structures. Give the promotion some slick name like Disney does, and promote the heck out of the “Family Experience”.

Let’s start with a nice place to eat, there just happens to be an existing restaurant that I believe is closed, the old Four Winds up on the top of mountain. Refurbish this exterior, keep the oriental theme. Remodel the entire interior; make it trendy yet understated with quality (think Disney) materials, oh, and have some good healthy food & moderate prices, oriental themed and a Sushi Bar maybe?

Just a few paces up from the “new” restaurant is the old unused Eagles Flight (Skyway) building, Exterior just needs refurbished keeping oriental theme, remodel the interior of the top level with an arcade & snack bar with outside seating, add a gift shop at the bottom to serve as the entry/exit to the arcade above (think Disney). Trust me, there’s nothing to do up on the Mountain, I’ve seen folks aimlessly wandering around, cash just sitting in their wallets!

The old “Magic Pagoda” building sits vacant just up the path a few more paces, across from Ninja and the Skytower. This large unused indoor space, with tons of room in front and above for queue lines makes a perfect fit for a first class family style dark ride, I’m not creative enough to figure out what to put in it, but you could certainly tie it into the “Tatsu – Ninja – Oriental” theme, a dark ride with A/C would be a hit at Magic Mountain. Heck, put a plush gift shop at the exit, people that have been sitting in a cool dark ride like to spend money (think Disney).

Do something with the bottom level of the Tower. I’m not sure why its closed (open windows with grates as I recall), whatever the reason, fix it. That specific tower was originally designed to be the Playboy Club, with a restaurant on one level and the “club” on the other. I’m not suggesting a “Playboy club”, but it can obviously be outfitted like an office building, you put just about anything in there. I’m thinking some high-tech flight simulators, offer hang gliding, parachute drops, things that invoke the tower’s height. The (small) queue lines for the simulators could be placed around the windows, the view from up there is amazing and would make your wait go faster. Also, charge extra for the simulators and offer “in-flight” photos and small souvenirs.

So you saying, nice idea, but what does this have to do with the Metro? Anyone who has walked up that hill knows why those buildings are closed, it’s a brutal walk, especially when its hot. The Metro has a station up on the hill, think about it, you could actually “shuttle” people to the top and get cash out of their wallets! After they eat, shop and do the dark ride, “shuttle” them back down the mountain to spend more money! The two lower stations should be refurbished and include posters or signs that show what’s new at the top of the mountain, all done in a “destination” style, even with recorded spiels to promote what’s on top of the Mountain.

That’s my two cents. There’s more to my “Family Plan” but this is the part that demonstrates why the they should BRING BACK THE METRO!

Do you think Jay Thomas would actually talk to me about the Metro???? Do you have his email address? (if you do, email me at: vintagedisneylandtickets@gmail.com) Does he need a project manager for the “family Plan” – LOL!

Donations? I would say it’s a historic attraction and if it were in the public somewhere I could see a campaign for donations, but since it owned by a corporation, I don’t think many folks would donate. However, I bet folks would open their wallets for some nice Sushi!
I guess I'm just a dreamer, I know it's probably a lost cause. Maybe I need to get some "Bring Back the PeopleMover" signs....
Posted by Vintage Disneyland Tickets at 12:37 PM

Okay, I have heard this from management personally on two separate occasions, at ACE events where they did Q & A sessions, the most recent of which was just two weeks ago, where this question got brought up specifically. To further elaborate (and paraphrase their answers), yes, it would cost about as much as a coaster, but would NOT draw in the numbers to later cover that cost. (I mean, can you imagine an ad campaign for a Metro? Even Disney didn't hype the new monorail as a new attraction.) Thus, not economically feasible.

They do also state, that, yes, it does cost a lot of money to dismantle as well... which is why they haven't taken it down yet. But they are going to. You don't have to take my word for it--Jay Thomas, SFMM manager, seems very personable, and would quite possibly be willing to speak with you about it directly, if you asked.

And for the record, I would love to have the Metro back, too. I miss it a lot myself. But unless we can pool together a couple of million for a donation, it's not going to happen.

Jestermn, I typed up a reply to your comments, but I exceeded the 4,096 character size limit (can I blab or what?). Please see the updated Sunday post again for my reply. Thanks so much!!!

VDT, I just went back and read your updated post. I like your ideas! They do need a dark ride. Aren't they still tied-in with or owned by Warner Bros.? Couldn't they use the Warner Bros. cartoon characters and come up with a cool and wacky dark ride? Why haven't they done something like this already?

Does the Funicular still operate? Remember the Dragon Car? I guess they can't bring that back since Ninja is using one of it's old stations. :-(

Thanks TokyoMagic. I believe they still use the Warner Bros. Characters, nice idea! I just had a vision of the ride using the Warner characters, they are lost in a amusement park that just so happens to resemble Magic Mt, cross promote the park!

Thank goodness the Funicular is still operating, I thought when they built Tatsu it was doomed, but son-of-a-gun they just built Tatsu around it. I rode it last May, what fun, that have that weird Euro feel and some serious A/C that blows one speed, Uber-FAST!

Do I remember the Dragon? I loved the Dragon. My friends all hated it because it was painfully slow, I was so sad when they took it out. The lower station still remains 100% intact and unused, also you can see some of the old track near where the Ninja cars re-enter the station.

Cool! I haven't been there since the early nineties, but I do remember remnants of the Dragon Car track still being there (covered with leaves) as well as the lower station still being intact. I also remember some sort of counter top that had been placed across the entrance way to the lower station and they were selling Ice Cream or Icees from behind it. Is that still there?