Disneyland’s Three Season Passport was the Ultimate Status Symbol in 1985. This special card for a Three Season Passport was a benefit for Hollywood Bowl Patrons. It's sort of an Annual Pass, but just for three months. Those are the three months that Disneyland has the least amount of visitors (in 1985). January and May are still slow months, weekdays in early May are my favorite times to visit the park (expect plenty of trips reports). September is pretty slow too, after school starts!

The scan and your screen are not blurry, it’s the card. It was printed on think shinny paper that’s solid black on the back. I’m thinking there has been some bleed thru over the years, that or it’s a bad printing job! 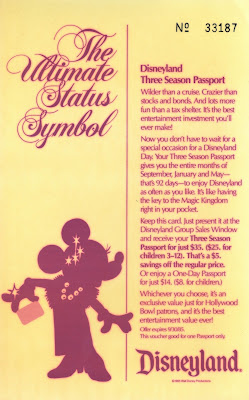 And for some color and non-blurriness, here's another undated souvenir slide of Alice and the Rabbit. I like the new Alice better... Be sure and visit Vintage Alice Disney. 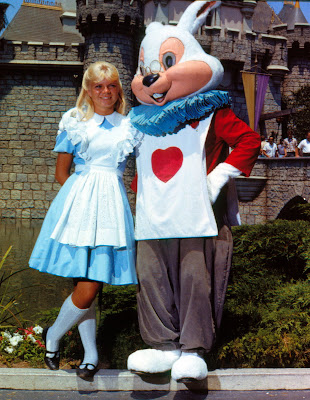 I was going to say that those slides from your last post looked very much like Pana-Vue slides, but this one today is definitely the same shot as one of the Pana-Vue slides....with the exception that it's cropped on the sides, making it rectangular instead of square.

Well, you have to hand it to Disney, they were always trying to figure out a way to get people to pay a bit more. A three month pass seems kind of silly unless you lived right near the park and really could go all the time.

the new alice is cuter, but I still hate the wig they put on them. And I am a big fan of the old Alice with knee socks...but any Alice is still a GREAT Alice :)

This Alice looks a little hard, like maybe she works in a cocktail lounge in the evenings.

This Alice looks more like a beach bunny, which is why the White Rabbit is smiling.