All kinds of fun entertainment is on tap; KRASH and Airplay are rocking the Tomorrowland Terrance. The Royal Jesters, were they a band? Hey the Royal Street Bachelors from yesterdays post! Big Thunder Breakdown Boys, that just sound fun!  Also since its spring break (now & in 1986) there are tons of "Guest Groups”, I guess my High School didn’t make the cut. 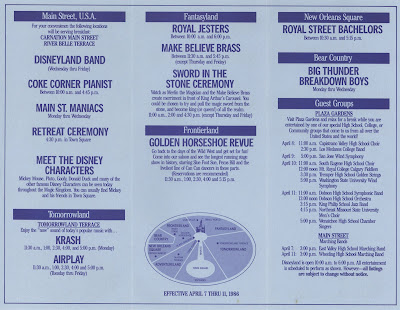 I’ve scanned lots of these flyers and this is the first one to have an actual blank panel. That would never happen today.

This post needs some color, how about a couple of Dogs in Fantasyland? Check out that kid on the right with the cowboy hat and Adidas shirt. I was the Adidas shirt king in Jr. High, I wore them everyday. My first girlfriend in Jr. High told me two very important things (1) “Life isn’t Pretty” what an understatement and (2) Pointing at my shirt one day, she said “Do you know what Adidas stands for?” Blank look on my face, she replied “All Day I Dream About Sex”. My reply: Still a blank look… 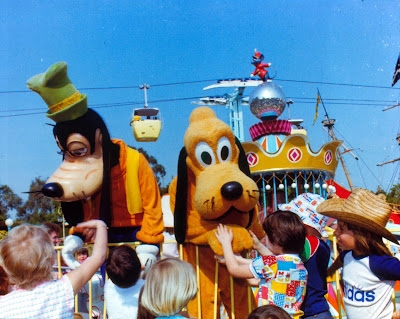 Does Mickey have a driver’s license? His foot looks kind of big for the clutch. 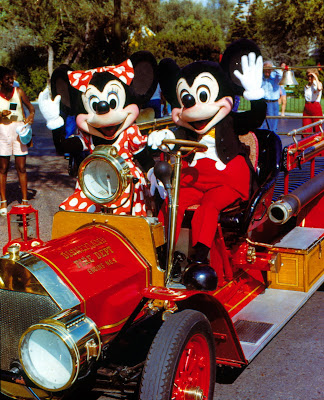 Both of the slides above are from a souvenir set of 30 slides that I recently acquired. They are in great shape; even my sub-par slide scanning skills make them look good. You’ll be seeing more of these in the future. Does anyone know what year these are from? 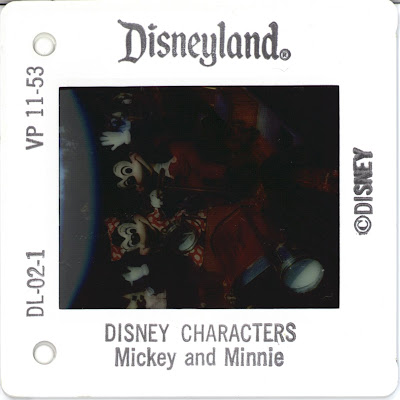 I remember Krash and Airplay. I also remember Gazelle, another band that played at the Tomorrowland Terrace in the '80s.

Wow, the Golden Horseshoe folks had to perform their show FIVE times a day. Hard to imagine how they kept it fresh and funny!

The Royal Jesters were some very talented guys from Entertainment in the 80s. They did juggling and plate spinning in Fantasyland.

There was also a "Jester"-type position in Frontierland, but the character was a riverboat gambler.

You can hear a full set of Airplay from 1985 on A WindowToTheMagic.com podcast Show No. 166. Here's the link to download or listen: