In honor of the upcoming return of Great Moments with Mr. Lincoln, lets take a close look at some early tickets for old Honest Abe. First let me say I am truly excited about the return of Mr. Lincoln to the Opera House. Even though this attraction scared the living daylights out of me in 1968, I have grown very fond of it over the decades since then. "The Disneyland Story: Featuring Great Moments with Mr. Lincoln." … is slated to open September 26th, 2009”. I might actually be on hand for that opening.

Today’s featured ticket was donated to me by none other the Gorilla who claims not to blog, but he really has an amazing blog (link). Thanks Major! Check out this rare first issue Great Moments with Mr. Lincoln ticket. It’s from a June 1965 Junior ticket book. At first glance it’s just a run of the mill Mr. Lincoln Ticket. But notice a few things; 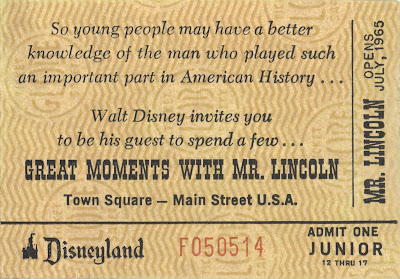 Major’s ticket book has a date code of 656, for June 1965. There was a second set of ticket books issued for June 1965, with a date code 656A. The “A” designation is less common and was usually done as a replacement for an early season print, at least I think that what it means. 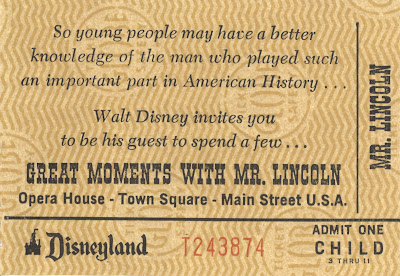 From late 1966 thru 1972, the Great Moments with Mr. Lincoln tickets would look like this 1968 version. Walt has been replaced with a corporation and Lincoln Savings would remain the sponsor thru 1972. 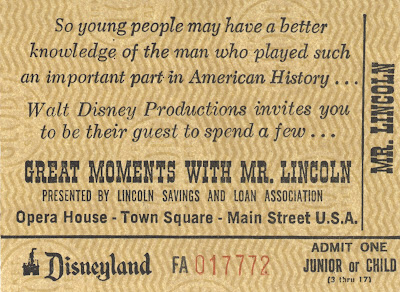 And last up, the back side of the June 1965 ticket book (non “A” version). This would be the first ticket book to include the wording about the complementary Mr. Lincoln ticket.

Thanks again to Major over at Gorilla’s don’t blog. “One man’s junk is another man’s treasure”…

Wow! that Major is sure a nice guy for giving you that ticket. That shows you what kind of people have Disneyland blogs.


Oh wait a minute, he just sent you a scan and your borrowing it. He still is a nice guy!

The Major has donated many scans to the blog (thanks Major) but this time he gave me the actual ticket! I was doing hand stands when it arrived!

I'm embarrassed at how creased the back of the ticket book is! But what are ya gonna do. Anyway, I'm glad you like the Lincoln ticket! Nice comparison of the tickets over the years.

Hey, guys. Thanks for the great detailed info!

Here's the entry from my (slowly decaying) blog that features the ticket from the opening of the attraction:

Since I haven't posted in a looooong time, I thought the least I could do would be to point-out a worthy retro entry.

Wow- The Major is giving stuff away...let's see, I need a few attraction posters, a couple of those nifty postcards, and let's see what is in his hat collection! Very nice of you Major- the ticket went to a great home! Thanks for sharing the information VDT.

I have seventeen of these ticket for children and juniors. Any idea what they may be worth? Thanks!