A Musical Souvenir of "America on Parade"

Here’s something you don’t see and hear every day – A Musical Souvenir of “America on Parade” One of the famous Picture Disc’s of the ‘70’s. While these look really cool, the process to create the image and create a quality sounding LP seemed a tall order, this 1975 Picture Disc is a decent pressing. Looking closely at the artwork I can see how the big heads were supposed to appear - somehow they didn't quite come out as intended. Maybe George Romero altered the designs at the last minute? 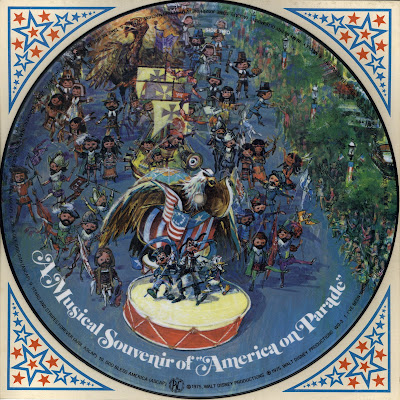 Some fascinating details about the sound of Disneyland’s “America on Parade” extravaganza. The songs are “generally renowned” but are “noticeably new and different” as evidenced on Zip-a-Dee-Doo-Dah as you've never heard it - side 2.
“The Great American Band Organ is the base upon which this music was built”. Most of the recording was done with an 1890 automatic band organ “Sadie Mae” with some Moog and other electronic effects mixed in. Hey, this parade used the same broadcast system as Disneyland’s Main Street Electrical Parade! 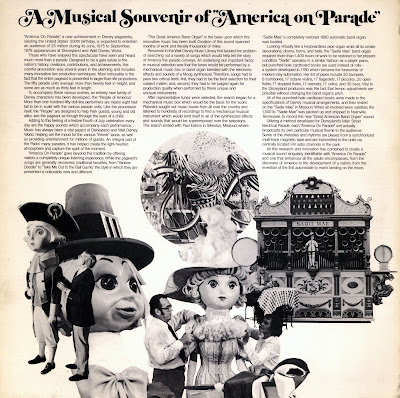 These picture discs sure look cool on the turn table. 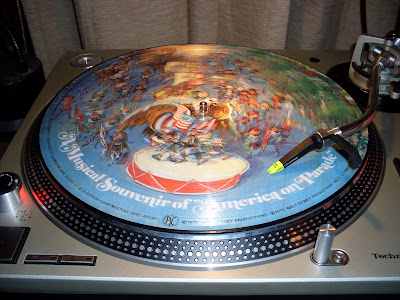 Let’s watch it spin for a while; turn your head with the record to avoid dizziness.

The transfer from vinyl to digital was fair/good. It’s a bit scratchy even though the groves look clean and un-played. Beyond the scratches, there's just not a ton of fidelity, but I’m not sure there was a lot to begin with, this is primarily organ music to be played from moving floats!

You can listen to the entire album here:


America On Parade - Side 1

America On Parade - Side 2 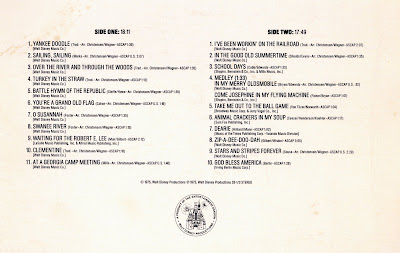 If your having trouble playing the files or you just want to hear someone else's transfer, check out MouseVinyl.com's version here (link) - if you get lost in that site don't blame me.
Posted by Vintage Disneyland Tickets at 12:01 AM

Well, I've already mentioned how much I loved this parade, but I also love this picture disc! Disney should sell soundtracks for ALL of their parades.....Tokyo Disneyland does!

I listened to the music before I read your description, and thought there was probably some synthesizer in there. Thanks for making a digital version of this!

(The dolls are still coming to get you)

WOW! What a great post! I'm grinning from ear to ear, LOL.

Great to hear this again. I was an AOP cast member and the music was a memorable part of the experience. I think I can still do the choreography...

I also have this particular album and was trying to find out the worth out of curiosity. Not that I intend to sell it.

I have a Very Good copy would Say Near Mint that I have owned since I was a child.
From what my parents tell me they only played it 2x and has bun in a box with other Albums since.
The lower 2 corners have a very light bend but overall in Very Good Condition.
Price tag still on lower right side $4.98
Interested in selling to a collector of Disneyland memorabilia .

Professional trading signals sent to your mobile phone every day.