The back of the ticket is even better than the front! Dated 1963 (WED Enterprises, Inc.) and featuring the Tower of the Four Winds by Rolly Crump. Do you think we might see a recreation of this someday? I wish I had this ticket at the Knott’s Preserved event, I could have asked Rolly to sign it!

I recently received this ticket from a seller on eBay. Not only was the envelope vintage (and smelled like a 40 year old ticket book!) but check out the stamps the seller used, talk about a time machine! 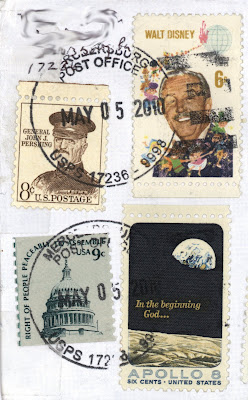 That ride was so popular at the fair, you'd think there would be zillions of these tickets still floating around. But this is the first one I've ever seen. Love the stamps! Oh man, it would have been great to get Rolly's autograph.

I'm sure I've seen the tower of the four winds poster reproduced. I remember lusting over it and wishing I could purchase it.

That is a very cool ticket, I especially love the Four Winds on the back!

That's so cool! My mom is actually from Queens, NY & went to the World's Fair when she was young. I'll have to rummage through her stuff and see if I can find something like this!

Never seen one of these. Great find!

I always find it interesting how universally loved Rolly's "Tower of the Four Winds" is. I also love how the design works as well as an actual structure, as it does a concept.

BTW, notice the top most weather vane is the "D" from the original WED Logo. Very sly. Rolly's idea?