Somehow this post got mixed up, it was suppose to be on Tuesday, oh well, just pretend its May 4th. By 1988 the tickets sure weren’t very exciting. Lack of color and could Goofy be any smaller? Even the card stock itself is cheap; it’s not glossy like the older tickets.

For anyone tracking the parking fees at Disneyland over the years (that would be me and probably Jason) parking was $3 in 1988 - I would pay ten times that amount still see that old parking lot again. 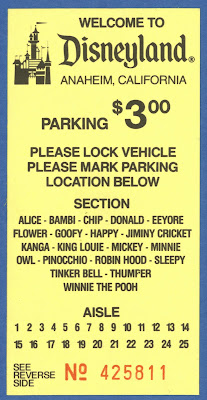 The gate flyer is all about “Blast to the Past” – you’ll be seeing more of “blast” in upcoming posts for May.

Clearly the emphasis is on the 2 & 3 day passports. Hey, the Queen Mary appears to have sprouted wings, I didn’t know she could fly! 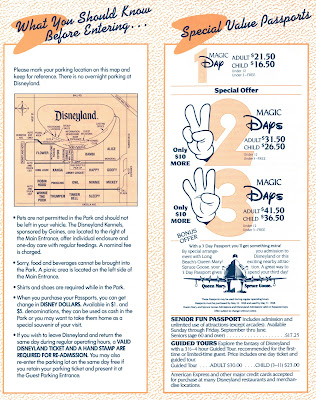 The “Blast to the Past” entertainment listing.

Oh boy, Circle Vision is offering two different shows every day! They had one hour to swap out nine reels of film, I wonder how many people it took to perform the switch over? 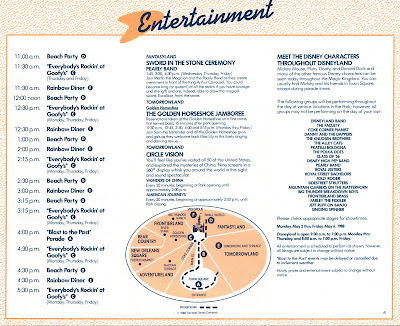 Blast to the Past “Trivia Game” is an entire post itself. Look for a post on the game next week and you'll see how it was possible to “tilt” the odds in your favor.

Can I still rent a 1956 Chevy Belair from National Car Rental? I wonder how much it was to rent it? 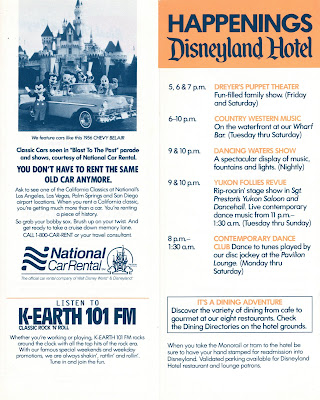 And lastly, Your 1988 Souvenir Guide book, which has been previously post on Bonus Sunday (link). 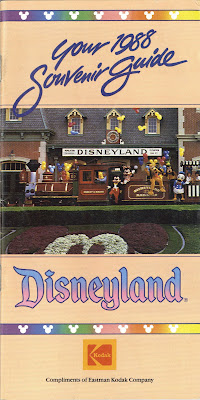 I kind of wish I had gone to visit the Spruce Goose when it was here, by all accounts it was an impressive experience!

The Spruce Goose was astonishing. Although it's about the size of today's 747, the wings come straight out from the body and they seem to go on forever. The body is empty (no seats or equipment) and it reminds you of the old "time tunnel" set that goes on to infinity.

As for the Queen Mary with wings, Wrather never had any success finding the right branding for the property. Early in the 80's they tried to launch "PortAdventure by the Sea" (an early example of both the use of annoying CamelCase capitols and the faux-exciting "ADVENTURE" tag)

It never worked, and the company just went back to calling it "Queen Mary and Spruce Goose."

By this time, the ship and plane are under Disney control, but regarded within the company as the red-headed step child. There was a lot of resentment among the executive staff: To be assigned to the Queen Mary was like being sent into internal exile in Siberia.

Jason Schultz said...
This comment has been removed by the author.
Thursday, 06 May, 2010

Disney gained control of the lease on the QM and SG in 1988 when they bought out the Wrather Corporation. Disney created a subsidiary company, WCO Port Properties, to oversee the lease. Also, in 1990, Disney held a special promotion at the QM and SG site called "Voyage to 1939". It was a recreation of the final voyage of the QM before she was pressed into service in World War II as a troop transport ship. The "Voyage to 1939" featured vintage costumes, music, cars, etc. Harrods of London also opened a branch of their store aboard the QM. You can download a PDF scan of the "Voyage to 1939" brochures and flyers from my website here: http://www.nametagmuseum.com/1939.pdf (and if you are even more curious, on my site, http://www.nametagmuseum.com/wdi.html I have the nametags from WCO Port Properties and "Voyage to 1939" on display.)