Welcome to Magazine Monday. It's triple bonus Magazine Monday featuring three separate issues of Jack and Jill Magazine. Jack and Jill, a Curtis Magazine for young children 7 to 10. Amazingly, Jack and Jill started in 1938 and is still in publication (subscriptions were suspended during World War II due to paper shortages) Check out some of the newer covers here (link) you can even get a current subscription.

Up first today it's Jack and Jill from May 1960 and features Kevin Corcoran in front of the Disneyland Castle with the three little pigs. 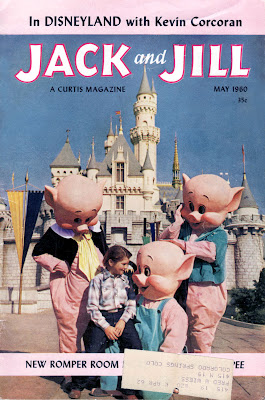 The article “In Disneyland with Kevin Corcoran” follows “Moochie” around Disneyland. City Hall looks the same today, however today’s Mickey and Minnie are distant cousins from these mice. 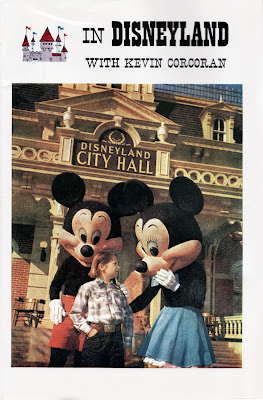 The photos are neat, the little drawings are even better… 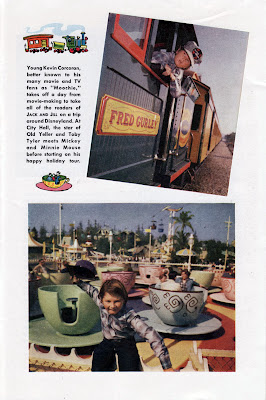 Kevin is finding all kinds of things to do at Disneyland. The park appears to be rather empty or maybe no one has noticed it's “Moochie”!!! 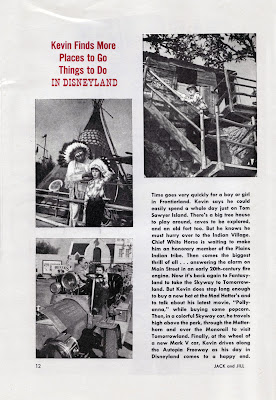 Where is that fake tree, the Art Corner? The little dude has three hats!!! Moochie’s got the whole Autopia to himself. 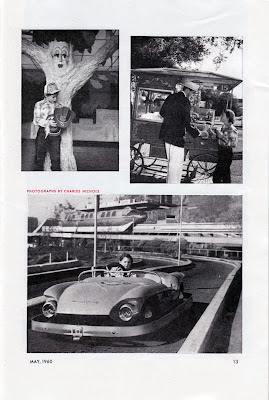 The May 1960 Scans above were donated to the blog by “Anonymous”, thanks! There are no advertisements because Jack and Jill did not accept outside advertizing until 1962.

The next issue is from June 1966 and has a charming clown cover. "Do you want it!” (“IT” fans know what I’m talking about). Does anyone really like clowns? 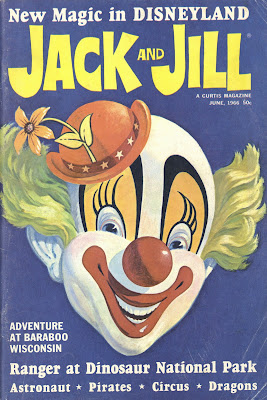 There’s “New Magic in Disneyland” Direct from the New York Worlds Fair (minus the Tower of the Four Winds sign) It’s a Small World, After All. Is there someone standing in the “Welcoming Banner” photo? I say it’s Walt. 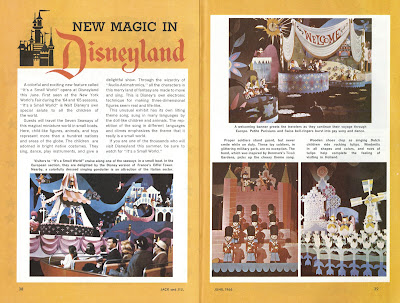 This is just a three page article, but still some fun vintage photos nonetheless. Please sing “Summer Fun”, it will put a smile on your face. 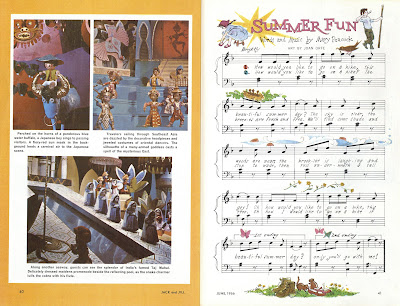 This Mattel advertisement is weird. Now I know where Disneyland got the idea for the Big Heads in “America on Parade”. I’m guessing these did not catch on, I sure don’t remember them being around in early 70’s. I do remember “Weebles”, you know, “they wobble but they don’t fall down”. 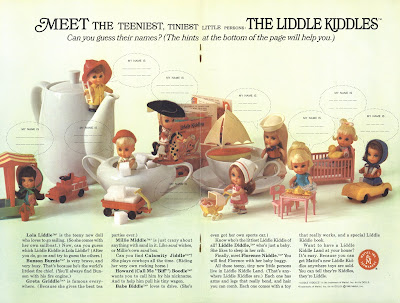 Color Magic, hey this looks kind of cool (for girls that is). 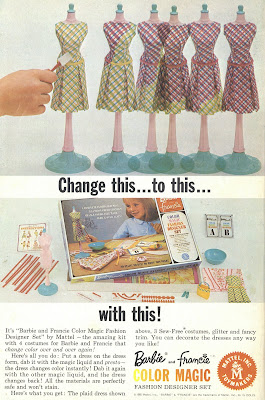 The third issue of Jack and Jill is from May 1967 and has a friendly (and hungry) looking raccoon on the cover. 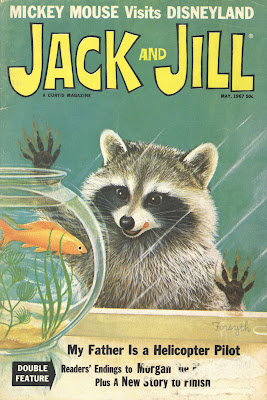 In this issue “Mickey Visits Disneyland” an "Exclusive for Jack and Jill". Mickey sure does get around! I’m guessing it's Paul Castle in that Mickey Costume, he played Mickey Mouse from 1961 to 1986. Check out this article about Paul (link). 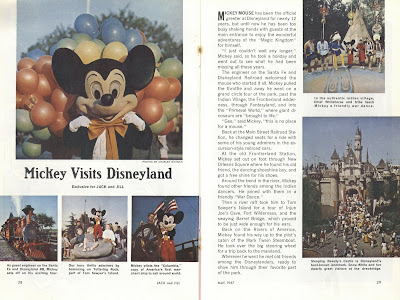 Mickey stayed clear of Tomorrowland, the “New Tomorrowland 67” was just a month or two away, but not photo ready yet. 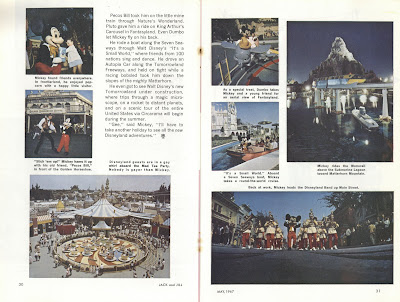 Expo ’67 has some groovy artwork. 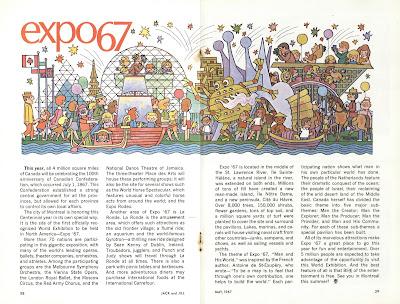 Talk about groovy artwork, the entire look of the “Flower Man” rings a distant bell way back in my head; being a toddler in the late 60’s was weird. 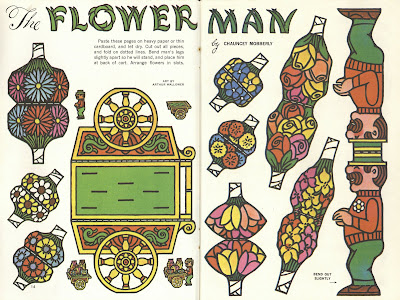 Several of the Jack and Jill issues feature “My father is a ____” articles. This month the father was a Helicopter Pilot and the story is told from his son’s point of view. Not Disney related, but I like it and thought it would be nice to share. 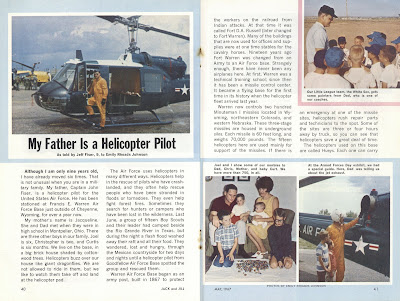 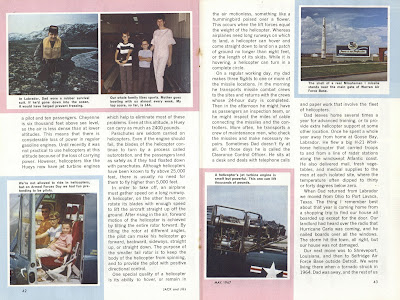 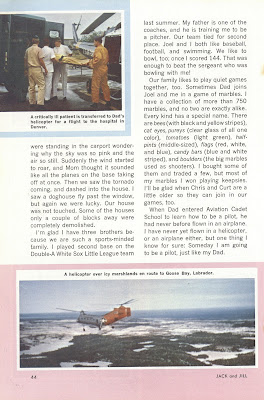 Posted by Vintage Disneyland Tickets at 12:06 AM

These are fantastic! I think that weird tree must have been in or near one of the hat shops/stands. I remember seeing a photo of Jack Benny trying on hats with that same tree in the background.

Great Magazine Monday post today...thanks! And thanks to anonymous for sharing that first one!

Wow, you could have made this three posts, but you did it all in one!

I'm not sure if that's Walt in the "It's a Small World" photo, but I see Rod Serling in the boat in the photo on the facing page!

Tokyo, just the thought of Jack Benny trying on hats cracks me up, dang he was funny!

Major, I thought the same thing about Rod Serling, he's even got the smirk down perfect! I Coulda done three separate posts, but heck, I still got tons of Magazines to go!

Mickey VISITS Disneyland? I thought he LIVED at Disneyland.