Imagineeringland Today - November 15 & 16, 1997. I have no idea what this is about other that what you see here. As a Disneyland fan you’d think I would be more up to speed on this stuff. I guess it’s self explanatory, looks like an event for Imagineer’s and maybe their families? The brochure neglects to mention where this event takes place but I guess if you're invited, you'd know where it is.

Hmmm, interesting pictures, I see Test Track on the upper left, that's a fun ride, too bad the poor Rocket Rods didn’t come out that way. 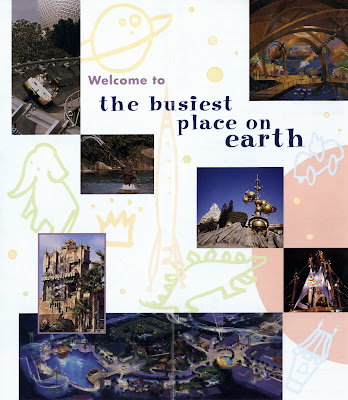 Here’s a close up of the DCA concept art, looks close to what came out, I think.

Lots of fun things to do! I would head right to Bonusland (fun word!) and have a long discussion with the Imagineers regarding the Rocket Rods and the use of banked roadways. Don't they know the coefficient of friction is vmax = m/s = mi/hr = km/hr? Were they nuts trying to use the flat PeopleMover track?. They "imagineered" failure for the Rods by going cheap. 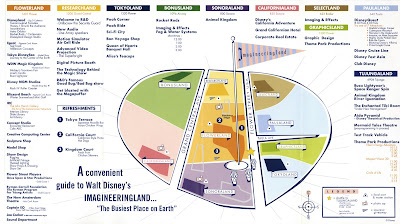 Posted by Vintage Disneyland Tickets at 7:54 AM

I have a friend who got to go to WDI for some sort of tour or "family night" or something like that; it sounds like it was the coolest thing ever!

Such a shame that the Disney company no longer seems to value the many talented and smart people who created the attractions that we love...

I recognize all of those Tokyo projects...and they all got built except for that Sci-Fi City. I wonder what that was supposed to be.

Your right VDT, DCA did turn out just like the concept artwork.....lopsided!!!! Such a strange and unpleasant layout!

Sci-Fi City was to be a major retheme/rethink of Tommorowland at TDL, whose design was headed up be Eddie Sotto I believe. Try a search for it on Alain Littaye's Disney and More blog. I really think it was the best looking of the Sci-Fi/Retro Future/Buck Rodgers concepts that WDI kept playing around with during that era. Think of everything good aesthetically about MK's New Tomorrowland and imagine it taken even farther. I really think Eddie learned from all the gaffs made with DL's and MK's projects, and made his design the best version, while also completely different somehow. I was never sure why it fell through.

BTW, does anyone know if the art in the top left of the second pic is maybe from Sci-Fi city? My first instinct was that it was for DL's Tomorrowland remake, but I think the timing might be off. The remake was already under construction at that point, so it seems odd they would feature an abandoned concept.

I think I remember this event... It was at the WDI offices in Glendale and was an open house for family and friends.