In case you haven’t heard, things aren’t looking so good for Six Flags Inc., owners of Magic Mountain in Valencia, California. It appears they may have to file for bankruptcy by summer time (link). From what I understand Magic Mountain is profitable and should still be around for a while, let’s hope so.

Looking back to a much brighter time in Six Flags history, this 1980 Magic Mountain brochure really shows off Six Flags most recent acquisition at the time, Magic Mountain. 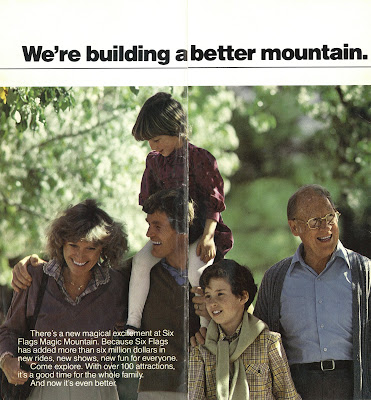 The Buccaneer was so new they had to use the artist concept drawing. The Water Sports Spectacular is where “El Bumpo” (Bumper Boats) used to be located. 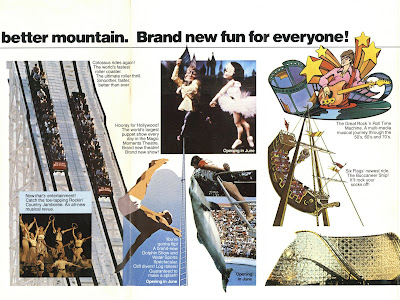 So much fun stuff. Hey, are those the Dapper Dan’s “B” team?   Check out the Barrel roll on the far right, that’s the “Tumble Drum” (1974-1980) it’s simple and silly, but I always hung out there. It wasn't really in "Kids world" as I recall it was more towards the "Electric Rainbow" and the "Himalaya". 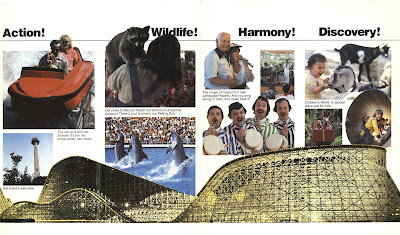 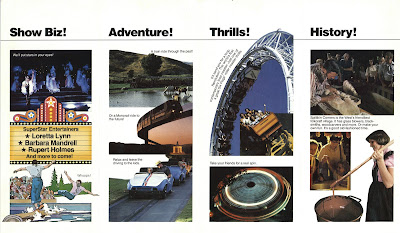 I loved those Taco’s! But what the heck is on that plate???

You won’t find any Trolls or Wizards in this brochure; however I believe they were still at the mountain in 1980, . “In 1972, Magic Mountain began using their famous trolls as their mascots. For the 1971 season, Magic Mountain had gotten permission from Warner Bros. to use the Looney Tunes characters. A little foreshadowing, as it turns out. The three trolls and the Wizard became a recognizable symbol of Magic Mountain. Bleep, Bloop, King Troll and The Wizard made their home at the park until 1985.” (Source Link).

If your into the Magic of the Mountain, be sure to check out all my previous posts here (link).
Posted by Vintage Disneyland Tickets at 12:01 AM

Hey, that "Tumble Drum" thing is giving me a vague flashback. Was there one of those things on Jungle Island at Knott's Berry Farm?

A great brochure from a great time period for the park. I think the food on that plate is supposed to be a steak, a salad with two cherry tomatoes, a baked potato and a sprig of parsley. Not a very appetizing drawing....a photo would have been nicer.

I do not believe that to be salad. I believe that to be peas, with the cherry tomatoes serving as a garnish. Anthropologists have determined that this sort of meal was fairly common in the mid-twentieth century, usually consisting of a big slab of meat and some form of potato, almost always accompanied by a vegetable, often of a starchy nature, such as peas or corn (probably canned). This sort of thing was often followed by some form of industrial dessert, often some brightly colored Jello.

Thanks for the info about the Trolls and the Wizard! I had no idea they were there until 1985.

In 1985, it was not an uncommon occurrence for a group of Disneylanders to make a day of it at Magic Mountain. Yes, there were still trolls then, but you could see their heyday had passed them by.

Of perhaps more thrilling significance was the fact that you could ride "Colossus" backwards!!

Don't think they do that anymore, but I haven't been out to Magic Mountain in many years. On my last trip, I rod "Superman: The Ride" twice. Scared the Krypton out of me!! 100 mph from a standing start and straight up a tower that is ridiculously high---a moment or two of "weightlessness" and then back down, backwards! All of this accompanied by a roar akin to that of an F-16. The second ride was on account of my nieces, who insisted we go again. I tell ya, at the top of the ride I'm almost positive I could see Bakersfield!

I was a ride operator on Funicular/Skytower and Roaring Rapids during this era. I do remember Disneyland groups coming through. It wasn't hard to guess that a bunch of guys with over-the-ears haircuts might be from Anaheim, especially when they were wearing Mickey nametags!

Revolution ("Rev") and Colossus were the biggest coasters anybody had ever heard of, and I doubt that things like Superman had even been conceived. It's kind of astonishing that the Goldrusher has managed to hang on all these years!

Sorry for the late reply, I'm still looking for my keyboard, its somewhere under this mess!!!

Tokyo; I never went to Knott's Jungle Island (not sure why) but MM's Tumble Drum was a blast, it was permanently installed and just "tumbled" all day :-) I miss it. That food just looks weird.

Anon; Industrial desserts are my favorite; In the early 70's I got a green Jello from Sizzler and I kid you not, it had dust on the top!

Major; the Trolls info was specially for you, glad you caught it :-)

Mike: Disneylanders at MM, seems altogether wrong. I did colossus backwards and my neck still hurts! I doubt they do it backwards any longer, the Lawyers wont let that happen! Superman, forget it. I rode Tatsu last year and my stomach is still on the track somewhere.