Today we travel back to day "one" for Disneyland or day “zero” as some may argue. The July 17th, 1955 issue of “Pictorial TView” a section of the New York Journal American, which I guess was (is?) a local New York City newspaper.

This is a LARGE format TV Guide that I suppose came with the newspaper. It measures about 10” by 16” per page, 20 pages total. Dennis James is on the cover, I didn’t recognize him until looking at other photos of him on Wikipedia (link) you’ll probably remember him too. He’s was in Television since 1938, wow! 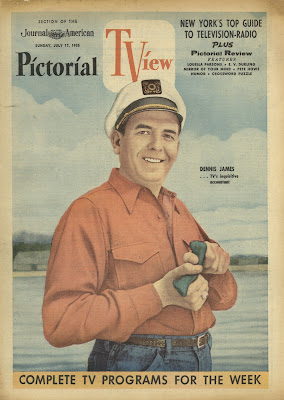 A truly fascinating article by Jack O’Brian quoting Leland Hayward about “Tollevision” or “Subscription TV”. That’s a pretty far out concept for 1955. Some of his statistics and dollar amounts seem out of line, but check out his future prediction about TV sets: “by the time fee-TV happens along, the old TV tube will have been replaced by TV screens hanging on walls in about four by five feet dimensions” I say he got half that prediction dead on! 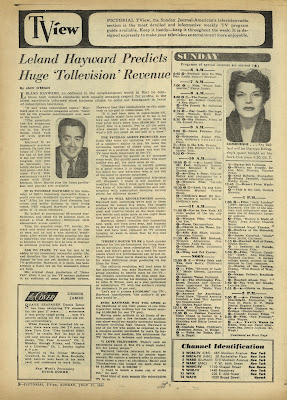 “Television’s Greatest Spectacle”. The ad claims “You’ll travel on the world’s largest miniature railroad to Adventureland”. Was the train ever supposed to stop in Adventureland, and if so, where??? Brought to you by - American Motors, Gibson Greeting Cards and Swift & Company. 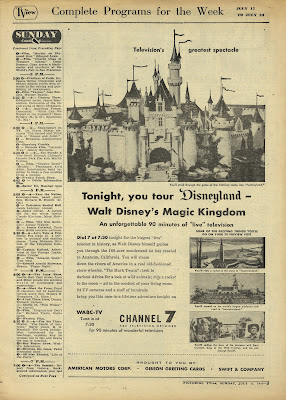 Next is a page from the center of the guide, the “Cheering Section”. Oh boy is there some dry humor in here, if you want to call it humor. Check out the big cartoon by Michael Berry, those ladies are, well, they remind me of a 1955 Cadillac front bumper…. Michael Berry did art work for Esquire, Liberty, The New Yorker, and many others, check out some of his work here (link). 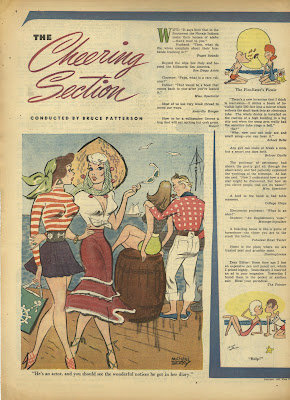 Speaking of 1955 Cadillac’s, I’d fill mine up with Sunco’s new advanced Blue Sunco “Premium quality high-test gasoline that sells at the regular price” which was about 29¢ a gallon in 1955! 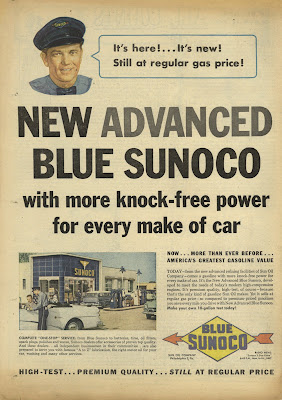 Come back on Bonus Sunday for the entire 20 page TView pictorial guide in high-res PDF format.
Posted by Vintage Disneyland Tickets at 12:09 AM

Great stuff, I could spend all day looking at old magazines!

The reference to taking the train to Adventureland is interesting, but it does seem like early magazine articles had at least one or two inaccuracies. I have a magazine released by Nash automobiles that says the park will have hundreds (it might even say thousands!) of miniature Sardinian donkeys. Hee-haw.

I can't wait for this one. This is so cool. Thanks for the links, too!

I know that show with 24 live cameras is on "Walt Disney Treasures - Disneyland USA" I will have to watch it again and see if they mention a Adventureland station, I know there is one in Japan lol
John