Here's a fun shot of Disneyland's rare Phantom Boats. I know they had problems with these and they didn't last very long at the park, but boy do they look cool or what? Could you imagine blazing down the Colorado River today in one of these, I bet you'd get some odd looks!
This photo appears to be from when Disneyland had a cast member do the driving. If you check out this photo (link) from Daveland, you can see there are no cast members driving. In fact, Dave's photo shows a steering wheel in the front seat and today's photo clearly shows there is no steering wheel up front? Did they removed the front steering wheel or add it later? I'm thinking the removed it after too many guest "incidents"... Either way they're cool and I want one! 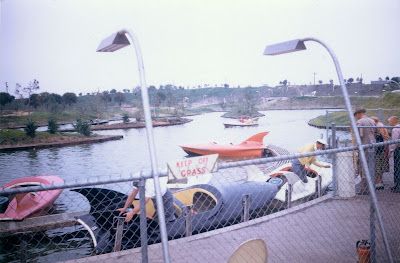 From Late 1955, the famous "B" Ride ticket, it's not a "B" Coupon yet. The Phantom Boats are the sole "ride" in Tomorrowland on this ticket. (This image was borrowed from http://www.keeline.com/):

The old "Stub Style" tickets have the boats referred to as: "Speed Boat", was this from the first naming of the ride "Tomorrowland Speed Boats" or did they just simplify the names on the tickets? 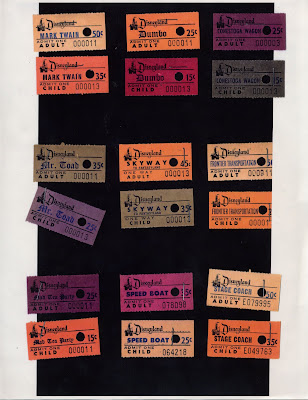 Posted by Vintage Disneyland Tickets at 6:10 AM

Wow, that is an incredible photo of the Phantom Boats!!

They are so Batmobile-like; love 'em much better than what came afterwards!

Would love to know more information about the Phantom Boats. We're they on a track?

The "Keep Off Grass" sign seems much more imperious than what I expect from Disneyland.