If you’re looking for Christmas decorations, amazing Castle and fireworks photo’s you’ve come to the wrong place, better try the Miceage. My trip reports are more obscure and odd. Today’s report is no exception.

Mornings are nice a quiet still, week days just before the Holiday rush are rather pleasant, the crowds don’t start till noon-ish and stay reasonable all day. 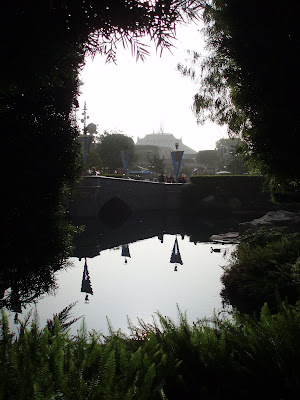 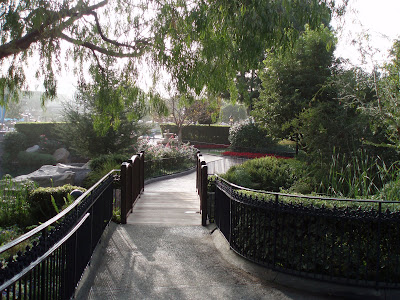 Breakfast of champions! I always manage to time the pancakes just right to get them “hot off the griddle” yummy-yummy! 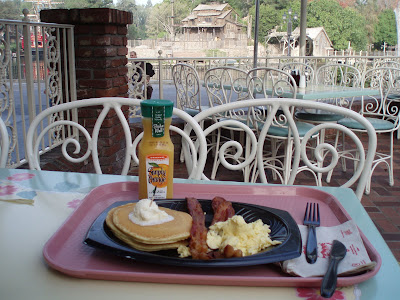 The river sure is peaceful early in the day, makes you forget you’re in Anaheim just off the 5 freeway. 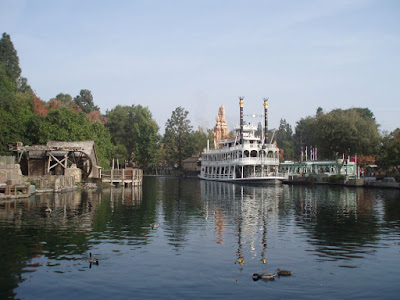 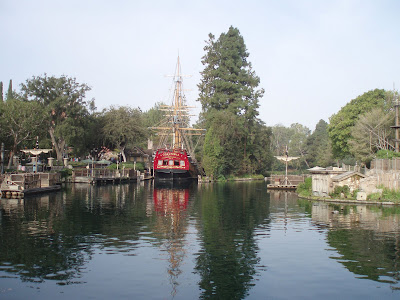 The headwaters of the river that runs thru Bear Country (or Critter whatever). This area has eluded both my old camera and my newer one. It never seems to want to focus, is it a magical river? 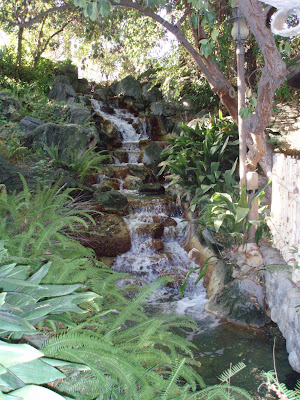 Bear Country is actually very nice when it’s not wall to wall people. 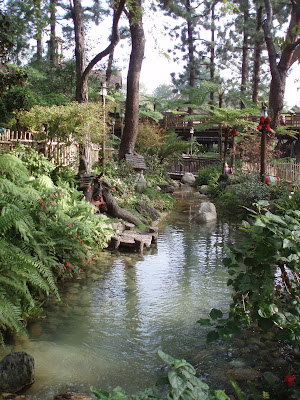 Here you go, there’s a few Christmas Decorations. Didn’t this used to be an Arcade? I guess I should know that? 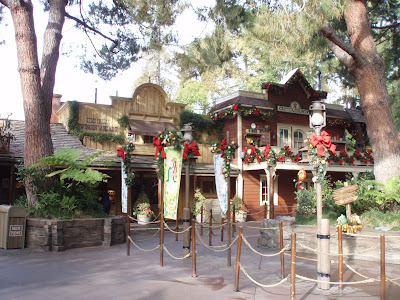 Well I finally did it, I rode the Pooh ride. It was better than I expected, yes its mostly plywood cut outs, but it's cute and the “Heffalumps and Woozles” sequence is mind bending to say the least. 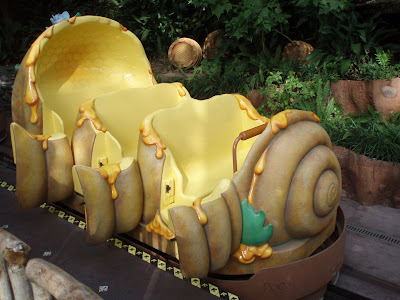 Alice and the Mad Hatter have been out in the park every time I visit lately and they really are becoming quite popular. A few minutes after this photo they had about 20 guests in a line with them dancing to “Tea for Two” with the band playing along. This really added to the mood and everyone was having a grand time. It’s all in the details… 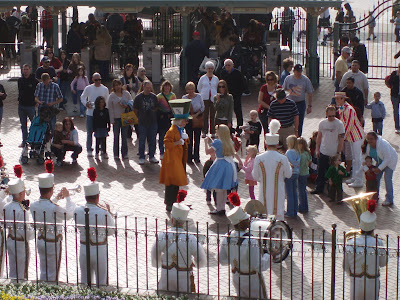 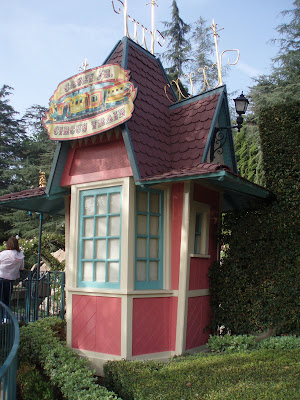 I took this next set of 6 photos for Jason over at Disneyland Nomenclature (link). He had commented that certain elements in the shop “Mlle. Antoinette's Parfumerie” in New Orleans Square were chosen by Walt, the shop is now called “Jewel of Orleans” but it does have all the original interior. Here is an article about the shop from the Summer 1976 Vacationland magazine. Here is the entire Summer 1976 issue in case you are interested (link-68mb). 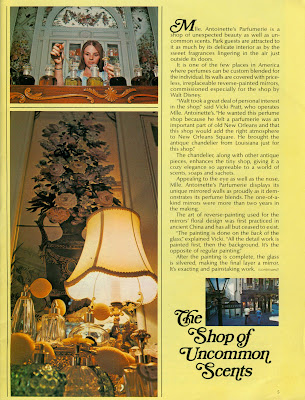 The nice ladies running the shop mentioned to me that the giant perfume bottle out front was also original; just the name has been changed. 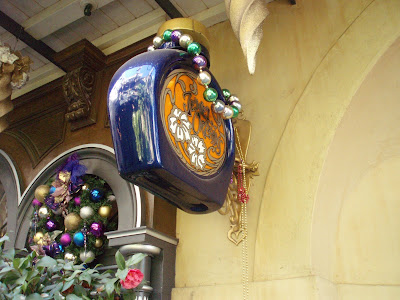 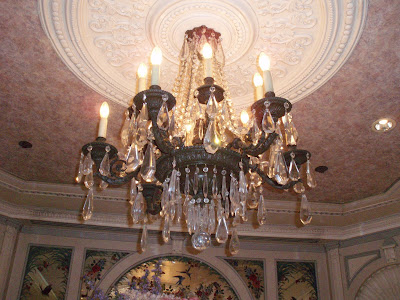 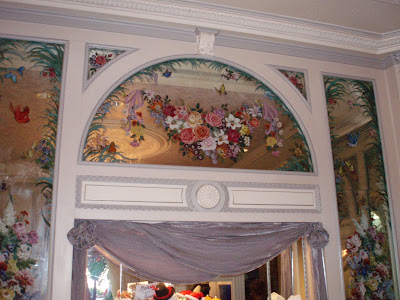 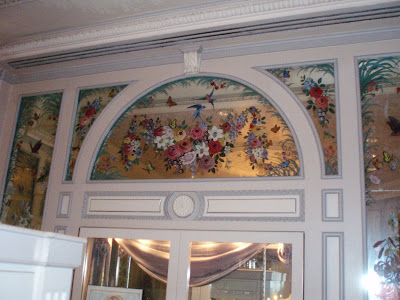 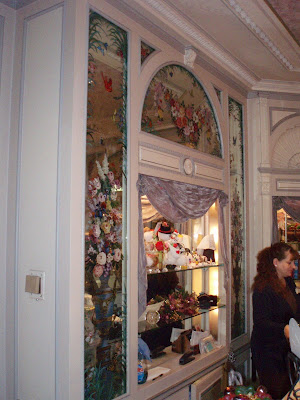 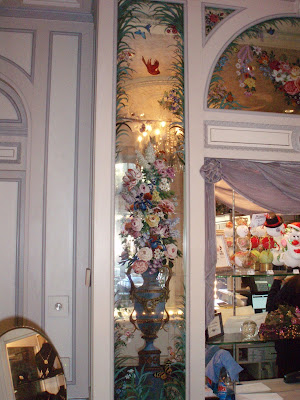 A brief stop in Tomorrowland finds the Monorail track-crack has been repaired, well, kind of. Actually, I could do a better Spackle job than that. I’ve been reporting on this for 3 months now (link). I hope things are not “declining by degrees” in Tomorrowland. 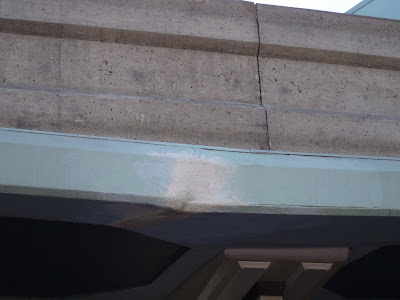 As a kid I changed a lot of my allowance money into quarters in this little booth. When do you think was the last time it was open? 1992 is my guess… 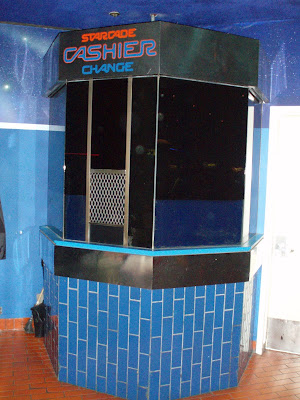 For some silly reason I keep trying to take pictures of Dumbo at night while its moving. My lower end digital camera doesn’t have a clue what to do and neither do I. Its just mesmerizing to watch all those Dumbo’s flying around in circles! 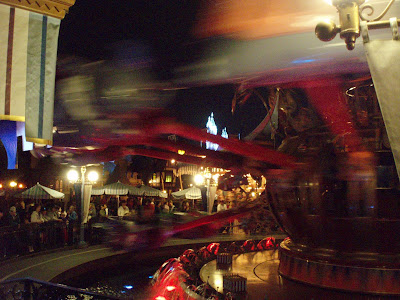 There was an extra treat near the end of an already perfect day. Fantasmic was not running, I didn’t ask why, I don’t care why and can you believe I’ve never even seen it! This meant the Mark Twain was running at night and New Orleans Square was not a "circus after dark". It’s been 20+ years since I’ve been on the Mark Twain at night; I had forgotten how nice and peaceful it is. Once you leave the “square” it feels so authentic it’s amazing. 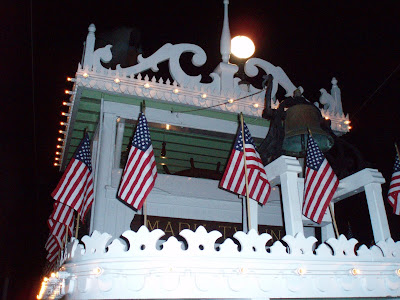 One last comment, I didn’t get a photo because you can’t take pictures inside the Haunted Mansion. As part of the Christmas overlay, they have a fun gingerbread coffin (with a gingerbread ghost inside) on the table in the ballroom scene. Just as your Doom buggy is entering that area you can smell gingerbread… It’s all in the details.
Posted by Vintage Disneyland Tickets at 12:07 AM

Where you really just going on Pooh for the first time? A while back, I posted a comparison of the same scene from three different versions of the Pooh attraction....Tokyo, Anaheim and Florida. See it here: http://tinyurl.com/TaleOfThreePoohs

Hi TokyoMagic! You caught me, I was doing this report at midnight last night, the answer to my question was in my own picture! DOH! Nice comparison on your post, the 'Cheapness" of the Anaheim version is what's kept me from seeing up until now... Upside, I got to see the three Buffalo heads from CBJ - too bad they don't move :-(

I've wondered about those heads. Everyone says they are from CBJ, but do you think they could be from the Mile Long Bar instead? They never quite looked like the audio-animatronic ones to me. Maybe it's just because they are in the dark and they aren't moving....and you only get a quick peek at them while twisting around backwards! I wonder if anyone out there knows for sure which heads they are?

Also, I forgot to comment on how much I enjoyed your trip report! It has been over 20 years since I've been on the Mark Twain at night myself. Does Riverbelle Terrace still do the "Mickey Mouse" pancakes? Those looked like non-Mickey flapjacks.

Sad to see that the Riverbelle Terrace has switched to plastic plates and utensils. Hope the French Market hasn't done the same.

I too have a picture of that cool old change booth in the Starcade. Many many quarters left my pockets there in the early 80's.

Thanks for the trip report!

I also rode the Pooh ride for the first time earlier this year. I liked it. A fun dark ride that reminded me of why I like Alice and Toad. Guess some people can’t get over that it replaced Country Bear. That show was fun but I have to admit I prefer the Pooh ride. In general the dark rides at Disneyland are my favorite. Great picture of Alice by the way. It’s neat that they start giving guests something fun as soon as they walk in the gates. I also took a night ride on the Mark Twain last summer. It is not to be missed. The Rivers of America look a lot different at night and the views of the “mainland” are really beautiful.

Thanks for this trip report, you always do a great job! That photo of Bear Country with the creek heading towards us is a beauty. The details of all of your photos are what capture my interest!

And to think we were at the park on the same day! You can take pictures in the Haunted Mansion...just not with a flash. Nice report, as always!

Wow--we just missed each other! I went to the Park on Thursday, first time in more than a year.

Ya know, Mouseplanet, Miceage and those sorts have meetups at the Park--not to mention those big alt.disney.disneyland meets in the past. I'd often see them, but shy away because they seemed so, well, weird.

But something tells me a meetup of VDT, jedblau, Matterhorn, Daveland and the Major (and readers) would be a gathering of really great and fun people with great Park stories. Just like we do online everyday.

Fantastic shots--thank you so much for taking the time to visit Disneyland and update all of us East Coast fans!

I think all of the Vintage people should meet up. That would be uber-geeky!

Finally! ;) Thanks for the photos of the shop. It's nice from a historical perspective that the bottle-sign is original, but it's a bit confusing to the theming!

TokyoMagic; I wonder if the moose heads are the same one too. They sure aren't moving! The RiverBelle does still make the Mickey Pancakes "Lana" there does a great job with the griddle and the kids love them, for me its not enough pancake!

Walterword; agreed about the plastic, its the only "downside" to the updated RiverBelle, not sure about the French Market, but Rancho del Zocala still uses real plates and silverware!

Old Dog; Pooh was fun and yup it sure reminds me of the other excellent Fantasyland dark rides. Not sure if I prefer it to the CBJ, but that might just be nostalgia talking.

Major,Thanks! Bear County was more photogenic than I had realized.

Dave; Were we at the park again on the same day??? Hey, you usually don't do weekdays, I gotta check with you next time :-)

OldDisneyFan; You were there too??? I agree about the other meet ups, Jason (Progressland) made the same comment to me also. Us bloggers just aren't the Miceage type really, at least I'm not :-)

I heard there was an official Disney Blogger night a couple weeks ago, not that my feelings were hurt, but I didn't hear about it until after the event. Maybe my invitation got lost in the mail?

I AM 100% for a meet of us Vintage Disneyland Bloggers, I just lack coordination and planning ability - anyone else up for it ? :-)....

Progressland; You're welcome, it was fun checking out the place, the ladies were sweet and the history in there is palatable.

Would vintage DL blogger READERS be able to come to a DL meet? If so, count me in! I've actually been going through vintage family slides and photos, as well as DL ephemera that I've been collecting since about the time I was in first grade. I've been thinking about posting some of it, but it's difficult deciding where to begin. I'll stick with blogging about Tokyo....at least for a little while longer.

The closing of the Parfumerie was a real loss to the park. Log books were maintained at the shop until at least 1988 with blending records for guests. I was told that you could contact the park and they could remix your blend and ship it to you.

The shop also blended cologne for you gents that plan on making a visit to Vintage Disneyland in your time machine (mine is a Delorean!).

it appears like you had an infinitely more fabulous saturday and sunday compared to my very own! haya lol, my spouse and i expended the idea studying for finals. ughhh.
wonderful blog, in addition! guild wars 2 key