It’s time to ring in some Holiday Cheer with a couple of fun Disneyland Employee Family Holiday Passes.

At first glance these two “Holiday Pass” cards look virtually the same, with the year and specific dates being the only change. In fact, I have several of these (1978, 79 & 80) and they are all basically the same. 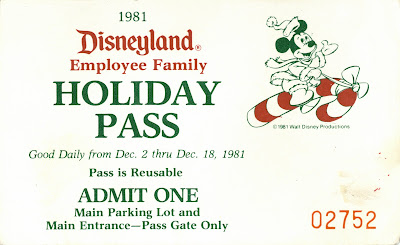 The 1982 pass is “Good for one visit only” and “Good from Dec. 1 thru Dec. 17, 1982". The reason for the change in 1982 was because the “lettered tickets” had been phased out earlier in the year in favor of the all for one Passport. The previous family passes were good for multiple visits because you had to buy attraction tickets to do the good stuff, so why not come back many times and spend more $$$. 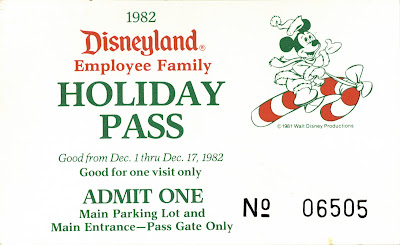 By 1982 these Holiday Passes had a whole new value, since getting thru the gate was now the key to the Magic Kingdom and all the rides you can ride! Either way these passes are fun and a neat thing for Disney to do for its employees.

It's the holiday season
So whoop de doo and dickory dock
It's time to go and hang up your sock.
Posted by Vintage Disneyland Tickets at 12:05 AM

It is amazing how the smallest things about Disneyland are so cool. Nice stuff Tim!

Hmm, interesting how the passes changed when the ticket system changed! Even with having to buy attraction tickets I would rather have the earlier system!

I recently came across your blog and have been reading along. I thought I would leave my first comment. I don't know what to

say except that I have enjoyed reading. Nice blog. I will keep visiting this blog very often.

Sorry I'm late on commenting on this post....I was in the Christmas Parade in 1981 and they gave each of us two of these passes. From what I remember, Christmas vacation started the day after the passes expired. They did not want us inside the park after that date. This was back in the day when they only ran the Christmas parade for the two weeks of Christmas vacation. During those two weeks, we had to be there every day and we worked a split shift (for an afternoon parade and an evening parade) and we had to clock out in between the two and we were not allowed inside the park on the break. We weren't even allowed to stay backstage....they made us leave the premises after clocking out. I was told that that changed the very next year and that the parade cast members were allowed to go inside the park between shifts. We had a big red "R" (for Restricted) stamped on our I.D.s that wouldn't allow us entry into the park. They didn't really treat us all that well, but I guess we were lucky to at least be given these limited holiday passes.

PTA, the smallest of details have always been my obsession...

Major; I prefer the old system too. I just observed kids exiting the Matterhorn yesterday and getting right back, fun yes (heck I'd to as a teen also!) but it sure makes some some long lines!

Susan; Welcome! Nice to know you are out there and just saying hello was reason enough to comment, thanks :-)

Tokomagic; WOW I guess these tickets are old friends to you! Makes sense how DL let Cm's and there families in before the big Christmas Rush. Do you think they do anything like this now? I know the CM party is next Monday night(and maybe Tuesday night) I bet that's all they get now.

I don't know how the policies/benefits compare now to then. I was still in high school then....it was such a long time ago, but it kind of seems like it was just yesterday, you know what I mean? I do still have my two passes along with tickets for the employee Christmas party...at least they let us go to that too. I need to dig that stuff out. I know I have a cast photo that was taken on top of the Candlelight Procession tree structure backstage and all the new hire and orientation stuff. I love looking at all that stuff on your site....you do an incredible job!