Welcome to Magazine Monday, I hope everyone is enjoying this weekly vintage look at Disneyland thru magazines. The week’s feature is “The Saturday Evening Post” from November 7, 1964.

The POST was another one of those Jumbo “Life” sized magazines.  These are sure fun to hold and read, there’s something luxurious and authoritative about such a large format publication. Are there any magazines still being published in Jumbo size?

The Cover reflects America’s focus on Russia, I like how McNamara declares that we are stronger than Russia! Also, “The negro movement cannot be stopped”, a truly riveting article by Dr. Martin Luther King Jr. 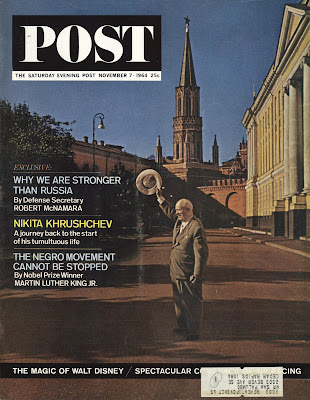 This eight page article entitled “The Fantastic Walt Disney” is mostly recycled history about Walt and his life, but there are some interesting items too. Walt looks tired in this picture, hey its 1964 and Walt’s doing 100 things at once. 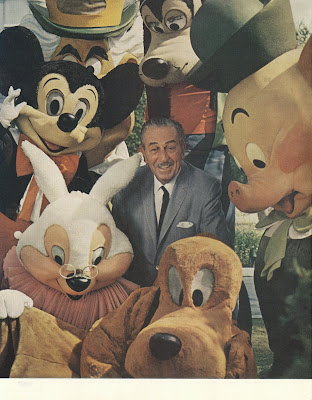 Did you know Walt Disney was awarded the Presidential Medal of Freedom? It’s “the highest decoration the United States Government can bestow on a civilian”. I bet Walt was proud of that award! 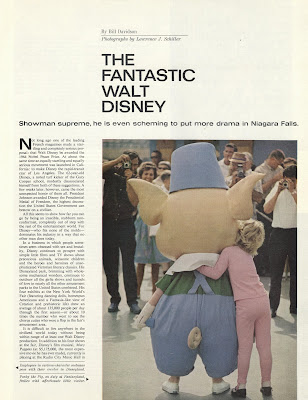 Disney is about to “rehabilitate the St. Louis waterfront with a multimillion-dollar Disneyland-type establishment under a three acre roof”, also “a proposal to erect an amphitheater at Niagara Falls”. And Disney has “staggering plans under way for a huge amusement park in Japan”! 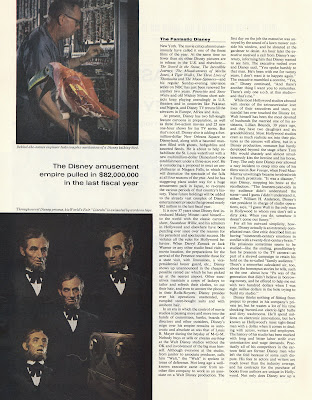 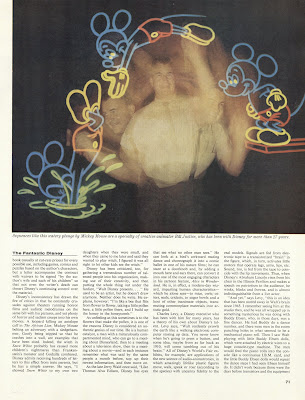 I really like this picture, great facial expressions on these super talented gentlemen. 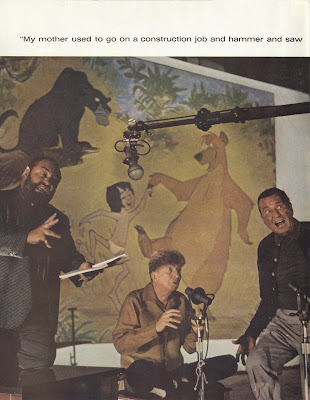 Walt in pair of Levis, how cool is that! 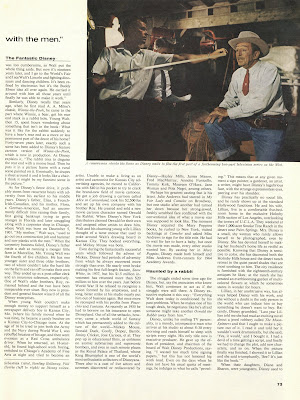 Wrapping up with some incredible photos on the last two pages of the article. Flying saucer madness! 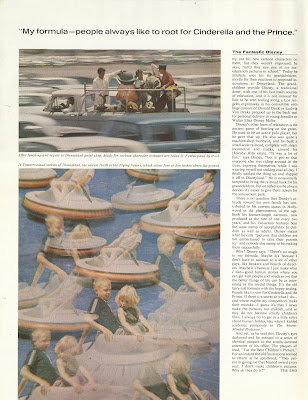 This teacup photo with the little boy and Goofy is priceless. 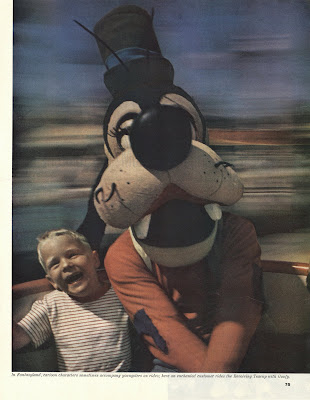 Please take a few minutes and read this article by Dr. Martin Luther King Jr.   Dr. King was a brilliant and thoughtful writer; his talk of a “grand alliance” is inspiring and thought provoking. When you read this article thru the prism of who became president on January 20th of this year, you’ll find we’ve come along way as a nation, still room to improve, but far and away from Dr. Kings 1964. 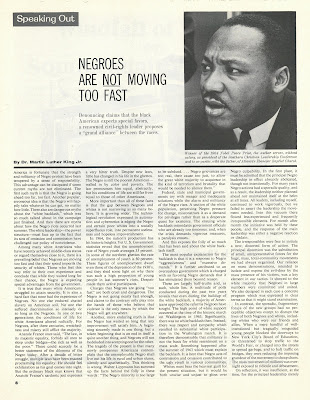 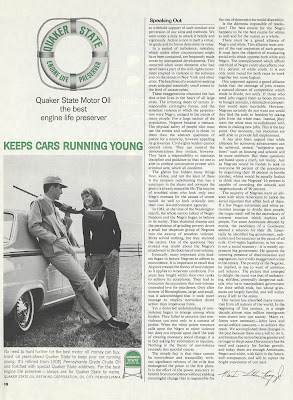 Now for some vintage advertisements. The big three automobile manufactures are all represented in this issue. First up from GM is a beautiful 1965 Pontiac. Not an ad for a particular model, but for the look of the full size line. I owned two ’65 Pontiac’s, a Bonneville and a Catalina, great “wide-track” cars! And that “Turbo Hydro-Matic” did shift “smooth as cream, but sure as taxes” I assure you. 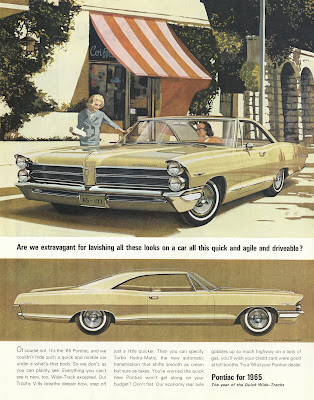 Chrysler showing off its sporty 1965 Dodge Coronet 500 Convertible! In 1966 Dodge would slightly modify a '66 Coronet 500 by adding hide-away head lights and an extreme fastback, they would call it the “Charger”, it'll never sell…. 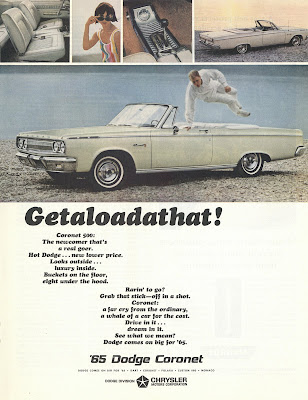 Ford chimes in with the 1965 Mercury looking long and low. All three cars are quite a contrast in styles. 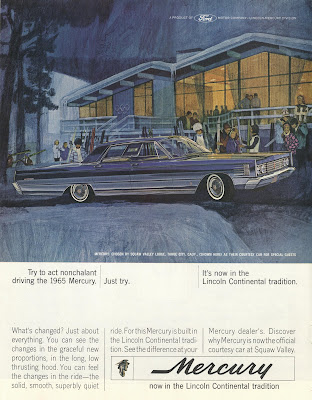 Generally speaking I prefer Coca-cola, did you see those great cans in last weeks post (link)? However, this young lady is so pretty I might be inclined to join the “Pepsi generation” 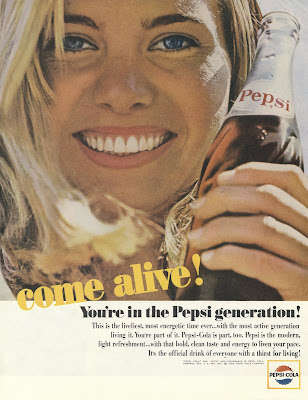 Embossed vinyl flooring with the look of bamboo! I am totally digging that kitchen. 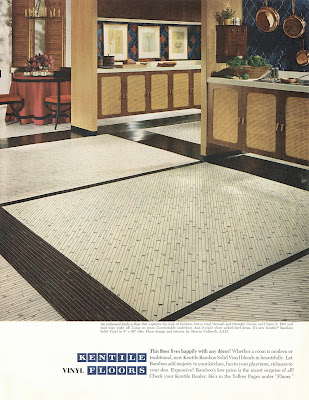 Back when dial tones where analog and a nice man came to your house to install color coordinated extension phones, those were the days. 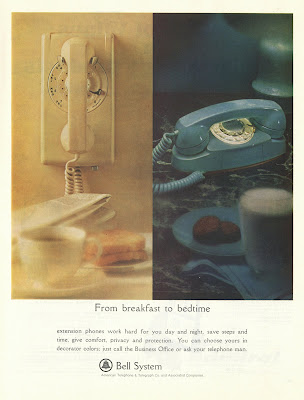 ***Smoking is bad, etc. *** Follow me along with each scene in this weird ad; (1) Mr. Johnson invites Ms. Smith over to watch some “private movies”, (2) Ms. Smith, always well dressed, is relaxing on the hip sofa while Mr. Johnson fires up the projector, (3) Mr. Johnson's points out some fun scenes as Ms. Smith starts to laugh, (4) It’s so darn funny that Mr. Johnson is breathless and Ms. Smith is holding her head so it doesn’t explode, and finally (5) The projector is off and its time for a Winston, because Winston tastes good… like a cigarette should!  Great art work, weird context. 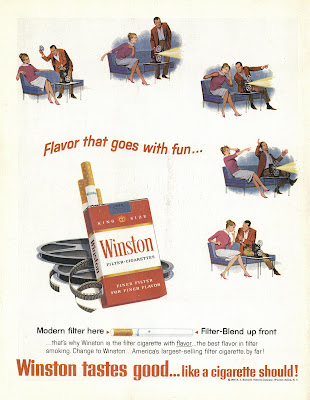 I love that pix of the Character Heads loaded on the back of the truck. The old ads are fun, too. You say you're a Coke man, but Walt prefered Pepsi. So do I. No accounting for taste (haha, get it, taste :-P ) Keep up the good work, Vintage!!!!!

The Disney pics are cool, but you know me... the advertising is awesome. Great magazine. I know where there are about a 100 Look, Saturday Evening Post, Life and other large magazines all in near mint condition. I am working on getting them all. Hopefully the person that has them can come down in price a little.

Wow, that is a great article, and one that I hadn't seen before! Lots of great stuff, like that picture of Bill Justice, and the photo of the three voice artists for "The Jungle Book".

Walt Disney shouldn't have declined being made the rapid-transit czar of Los Angeles! Southern California would probably be better off today if he had been in charge. We might have actually gotten people movers and monorails!

Great photos in the article.

The Pepsi and Bell Telephone ads are suitable for framing and hanging in my kitchen.

The Mercury logo is beautiful.

Great stuff all around, Tim!