Here’s a rare Main Gate Admission ticket. It’s a ticket from the Upjohn Company. The Upjohn Pharmacy was on Main Street from 1955 to 1970, this ticket is from 1966 or later. 1966 was the year of a price increase to 75¢ for Child admission; it was 60¢ prior to that. The low serial number tells me this might be a 1966 ticket. Hey, the "Disneyland" font and train station graphics match my blog header, cool! (thanks again Richard!)

This ticket doesn’t actually state “Complimentary” most variations of these tickets do state "Complimentary" (link to prior post). My thought is that tickets like in today's post were purchased from Disneyland by the Upjohn Company and then they gave them out with their “Compliments”.

A great vintage postcard of the Upjohn Pharmacy. This came from a great new site www.disneylandpostcards.net there are some amazing scans from a collection of over 2,000 postcards! And I thought I had a lot of tickets! Be sure and check out the postcard site and the related blog (link). 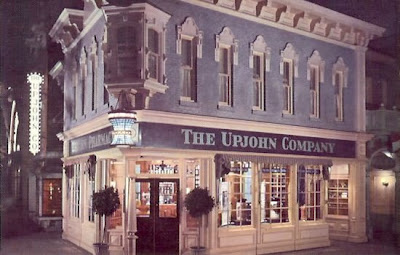 Am I the only one that thinks that thing hanging over the door looks likes like a small version of the clock of the future?
Posted by Vintage Disneyland Tickets at 12:05 AM

The lamp over the door does look like the Clock of the Future, but only accidently. It's actually a mortar and pestle, the older style of mortars were hour-glass shaped.

BTW, the Clock of the Future is, in itself, a 50's restatement of the hourglass, so the clock's shape is not entirely arbitrary.

The Upjohn postcards were among the first ones I ever bought when I decided to collect Disneyland postcards. I could tell that they were early, and therefore assumed that they were scarce.

Since then I have found that they are very common, there have been *stacks* of them at collector's shows. I could wallpaper a room with them. Oh well, they're still a nice souvenir!

Thanks for the plug to my sites. I, too, have a few tickets but nothing compared to what you must have. I'll send a few scans of what I might consider hard to find items to see if you have them.