Time to give Knott’s Berry Farm a little love.

It’s pretty amazing that Knott’s had a real cable car system in the park for years. I’m not sure when they took it out, probably during the big expansions in the 1970’s.

Up first is an undated but pretty old Cable Car ticket, this ticket is large at 3 1/2” by 8”. 15¢ is the lowest price I have seen for the cable cars. Those little punch holes on the bottom indicate this ticket was used.

The back has a neat little story about the San Francisco cable cars history. Apparently the 5 cars at Knott’s came from San Francisco, they're the real McCoys!

The “green” cable car tickets are a little newer and much smaller at 2 ½” by 5”. Still some fun history mentioned on the front. I’ve posted these tickets before, but this is the only one I have the still retains its original stub. 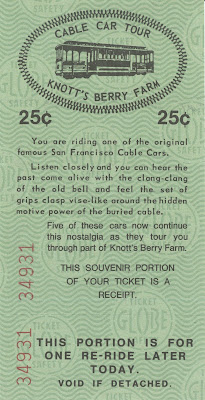 The back has a fun map showing the route the cable car takes thru the park. At one time the route traveled much further into the park as seen on this 1955 Map (link). 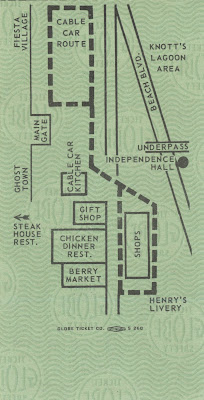 And a nice little photo of one of the cable cars in action, they looked fun, too bad they’re gone. 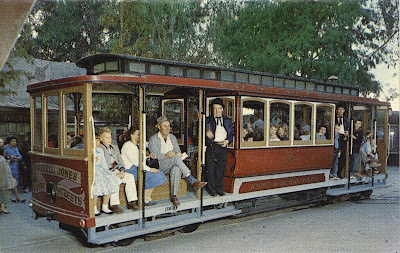 Posted by Vintage Disneyland Tickets at 6:44 AM

I always wondered how Knott's wound up with genuine San Francisco cable cars. Guess it makes sense that some were removed from that city because of automobiles! I wonder where those cable cars are today?

I was wondering the same thing as the Major. When I started working there in 1982, they had already been removed, but the patched asphalt in front of the Cable Car Kitchen revealed where they had been. I never saw any sign of them in the backstage areas. Hopefully they went into proper storage or wound up in a musuem someplace. I do remember riding these as a kid, but only around the shops and the old parking lot (where Camp Snoopy is today)....I never knew that they went further into the park! I wonder if they shortened it when they fenced in the Ghost Town. Great memories....thanks for this post!

Major Asks: "I wonder where those cable cars are today?" Katella answers: "Keeping the Alweg Monorail company in a Mexican landfill."

Actually, I don't know that for a fact but when I asked my Magic 8 Ball, all I got was "The Answer's Grim."

Fascinating post today. I had no idea these cable cars existed, and the early map of Knott's is positively prehistoric.

Well, how about a piece of good news for a change? The Knott's Cable Cars were returned to the city of San Francisco around 1980.

Between the years of 1955 and 1979 there were six cars running around the Knott's grounds. And yes, the original route ran deeper into the park.

Today, you can still see some of those authentic cars - so we've heard. Some in San Francisco, one at the Perris California Orange Empire Railway Museum and another in the city of Poway, California.

Thanks Outside-the-berm! Do you know anything about the comment on the yellow ticket that talks about Knott's acquiring the cable cars and the "journey" which "reads like a fairy tale"??

SF had several cable car companies and routes originally. However, these began to disappear and much of the city wasn't always interested in keeping them. The restoration and preservation of three lines which run today are a credit to a group of people who wanted to keep the cars running as an icon of SF. This led to a law which prevents cable cars from leaving the city.

Knott got his cable cars when this desire to keep all of the had not yet resurfaced. When you ride the cars today, most have plaques to indicate the year they were built and though they may look old and similar in design, most are actually quite recent. There are few old ones running on the three lines in the city.

I don't know how many of the ones owned by Knott's Berry Farm ever returned to SF. It seems like the sort of thing that would be noted on the Cable-Car-Guy site.

I thought that a SF cable car was at Travel Town in the northern part of Griffith Park near Burbank. This is a free mostly outdoor museum of railroad equipment which is well worth a visit. Near it is the Los Angeles Live Steamers where you can visit Walt Disney's barn used for his own backyard train layout and a station from Ollie Johnston's house.

The Orange Empire Railway Museum in Perris (Riverside Co.) mentions two items acquired from Knott's. One was a horse car (also used as a refreshment stand in the park) and the other was one of the six cable cars. However, their image link is broken.

The city of San Diego acquired one of the Knott's cable cars around 1988 and its plan to use it downtown did not materialize. The Poway-Midland Railroad acquired it and it is in the middle of a two-year restoration project to make it operational. We already have an 1894 LA Railways trolley, 1950 Fairmont speeder, 1880s ore cars, and 1907 Baldwin 0-4-0 steam locomotive--all which operate on our 42" gauge half-mile loop of track.

The cable car will use batteries and an electric motor in an updated version of the way the cars ran at Knott's.

Much of the woodwork is being refabricated in our woodshop for the pieces which are not sound. This work is done by volunteers on Saturday mornings and sometimes in the middle of the week. Progress is being made but there's still a lot of work remaining.

As a side note, the steam locomotive is undergoing its annual scheduled maintenance which includes boiler inspection, cleaning of tubes and boiler, replacement of valves and other repairs as needed. Depending on the number volunteers who work on it and how quickly it comes together, we estimate that it should be running again in March. Some track work done by contractors to the City of Poway may complicate the return to operation schedule.

Thanks for taking the time to tell us the story about the cable cars.

This kind of contribution helps make the internet a useful and responsive resource, instead of a venting ground for cranky old men with 60's novelty toys posing as oracles. :)