I recently came across a great set of amateur slides from August 1973 of Magic Mountain in Valencia California. There was only one problem, and its name is MAGENTA! These slides had turned the most vivid shade of magenta I have ever seen. I figured these were beyond repair, but I sent them to my buddy Dave over at Daveland and he was able to restore a great deal of color. Thanks Dave, we all greatly appreciate it!

There are about 25 slides so I will be breaking this series into three parts. I also have some fun stuff to include with each post. Check back on the next two Wednesday s for part’s 2 and 3.

“It’s always best to start at the beginning” so let’s take a look at a pre-opening article in the “Amusement Business” magazine. This is the March 13, 1971 issue. The tower was originally designed (by Intamin) to be the Playboy Club in Chicago, but they passed at the last minute so Magic Mountain bought it. 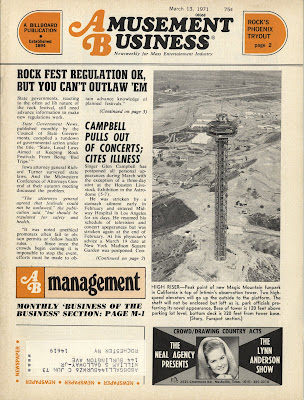 LOTS of details and data. That’s the Four Winds restaurant being built, the building is still there (with awesome views) but the last time I checked, it was closed. If you want to see a pre-opening brochure and inaugural day ticket, see my earlier post here (link). Magic Mountain would open on May 29, 1971. 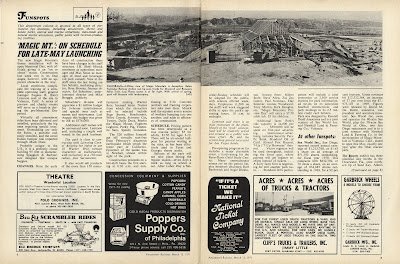 A close-up of the Tower. The height scares me, but I will go up next time because there is a great Magic Mountain museum at the top! If you look closely in this photo, you can see people on the lower level. The lower level was screened in, no windows. The lower level is closed to the public now. In the "Playboy" version, this level was going to be the lounge, with the restaurant on the top level. 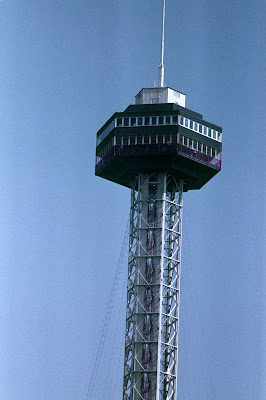 Taken from the tower, these are the fountains where the “Valencia Falls” spill into. The building in the lower right is the “Coffee Grinder” which is now the “Internet Cafe”. See the popcorn cart in the upper right? They STILL sell popcorn there, wow! 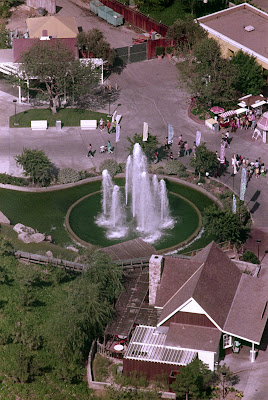 Three neat views of the Valencia Falls. The Falls were turned off recently for a few years as they built Tatsu. They have now been turned back on, see them on my Magic Mountain post from May (link). I sure dig the “MM” flags! 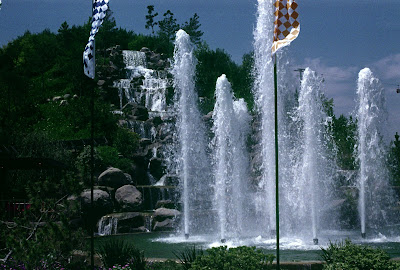 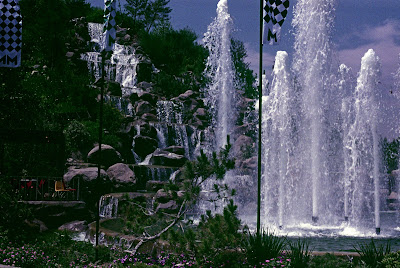 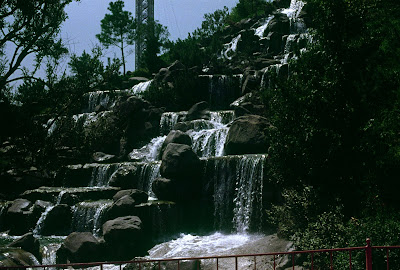 A few views of the Log Jammer. This view shows one of the lift hills and the first drop, the second drop is a blast, not surpassed until Splash Mountain. 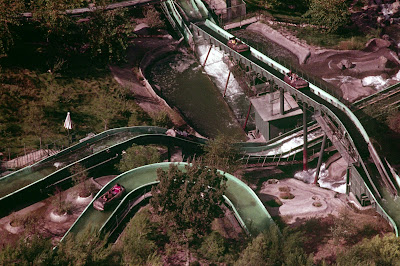 More “flume”, some track from the “Gold Rusher” roller coaster on the left and part of the HUGE Show Case Theater on the right. 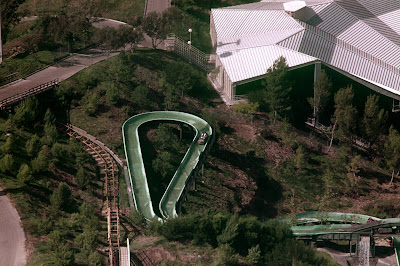 The Log Jammer as seen through the windows of the “Four Winds” restaurant. 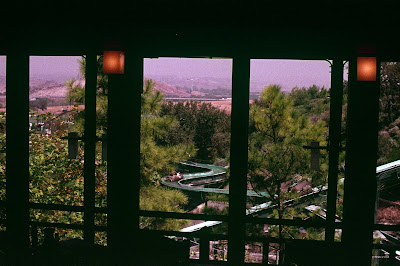 A couple of Souvenir snaps shots. The Wizard and a couple of Trolls in front of the falls. 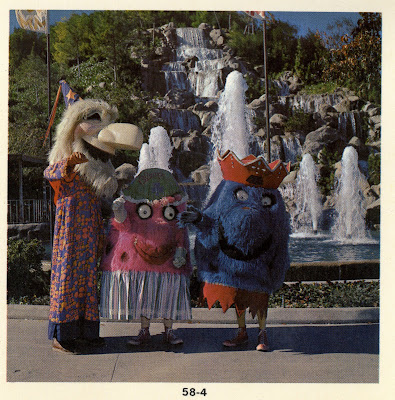 The Fountains at night. 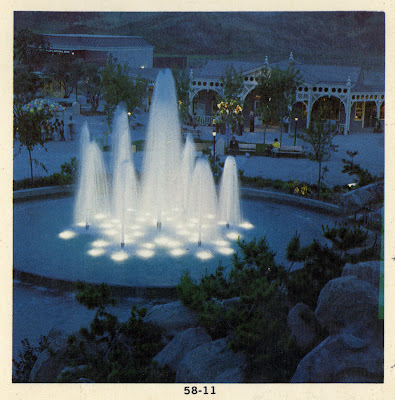 Here’s a special treat. I posted this 1971 Magic Mountain Wall Map back in April, but I had to stitch it together myself and it was kind of sloppy. Alan over at the fabulous Wishbookweb (link) was kind enough to stitch it together properly from the four scans. The map shown below is my misaligned scan, but the link here is for the corrected version. Thanks Alan! If you've even been to Magic Mountain in the 1970's, be sure to download this map and study it... 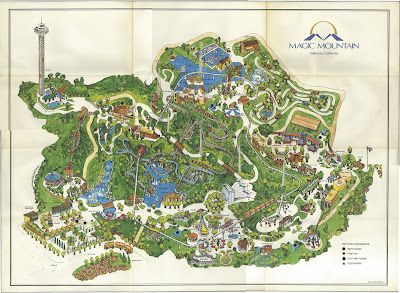 Be sure to check back next Wednesday for Part two.
Posted by Vintage Disneyland Tickets at 12:03 AM

Great photos and great info! I clearly remember being on that lower level of the tower and feeling the breeze blowing through those large open wire squares. I also remember the lower floor was not carpeted like the upstairs and that it was made of large metal plates that didn't quite come together perfectly tight, so there were cracks between these plates that you could peer through all the way down to the ground. You had to kneel on the floor to do this, but it was just one of those things we would do...even though it would creep us out!

Love the wizard and trolls, I actually remember those days! Any pre-Six Flags photos are a treat. Great map too!

These photos look vaguely familiar - ha! It's been at least 30 years since I've been to Tragic Mountain.

I was a ride operator on the Sky Tower during my junior year in high school. The crew was small, since the only real position was running the elevator. A fun thing to do was direct guests to look down between the elevator door and the floor as they stepped out onto the top level. Like peering between the floor plates, it gave a sense of the tower's height that you really couldn't get from walking around up there.

Tokyo Magic; I only went down to the lower level a couple of times. I do recall those large wire squares and metal floor and my knees are getting weak thinking about it! Don’t get me started about my “friends” that would rock the bucket on Eagles Flight!

Major; All “pre-six flags” MM stuff is good. I loved the Wizard and Trolls, funky early 70’s, but original and much better than the Warner Bros. Characters (yawn)…

Dave: 30 Years, you were minus 1 when you last went? LOL! You gotta see the place; it’s actually looking pretty good now. Your new digital camera would get some fine photos for you…

Yellows; Oh man, you are trying to scare me huh? The most difficult part of visiting the tower IS the elevator ride. For those that don’t know its glass or open or something scary that you can see outside from. (Sweat beads are forming on my forehead recalling the ride).

Maybe yellows can speak up here. But, when I worked at Magic Mountain, the SkyTower was a premier place for women to work as Ride Operators. The Ride Operators at that time (1979-81) wore really funky silver-lame astronaut-like mini-skirted costumes. Only women worked on this ride and all were the most attractive they could find. The tower was sponsored by Western Airlines (the "ooooonly way to fly", and the upstairs level had a little shop that sold Western Airlines-themed merchandise. There were large mylar window stickers where Western Airlines destinations were highlighted ("look north to Seattle", etc.) It was a very cool place.