It's Knott's Monday! Following up on a previous post where we compared Knott’s Berry Farms “Chicken Dinner” restaurant menu’s, today’s lets compare prices at Knott’s Steak House. You can see the previous Chicken Dinner menu post here (link). Ignore the part about how today’s post was suppose to happen in a week, since that was back in early July! Hey, it was a busy summer!

I don’t know the actual date the “Steak House” opened at Knott’s. Maybe some Knott’s fan out there could let us know. I do believe the “Ghost Town Grill” was sort of the Steak House version 1, or at least its beef items did end up on the first “Steak House” Menu.

Since it’s always best to start at the beginning (or at least the beginning of what’s in my collection) here is the cover and price page from the “Ghost Town Grill”. If you would like to see then entire menu/brochure, you can download it here Ghost Town Grill - Full download (9.5mb). Filet Mignon $2.50 and ice cream was a dime!!! 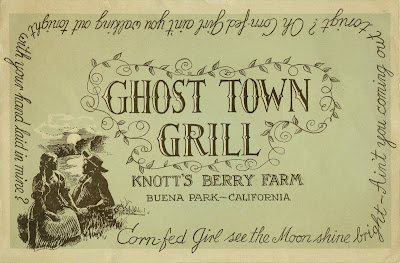 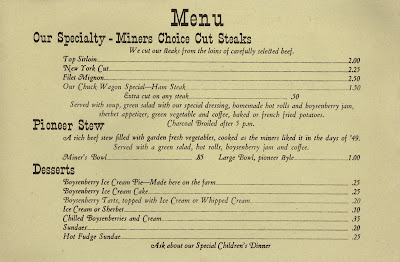 The next five sets of menu price pages represent approximately 1955 to 1970, however a couple don’t have dates. These are brochure type menu’s with about 8 pages, mostly pictures and descriptions of the farm. The center pages have the prices as you will see below. There are 3 difference versions of the covers, one with no phone number, one with a “LAwrence” phone number, and one with the area code (714). 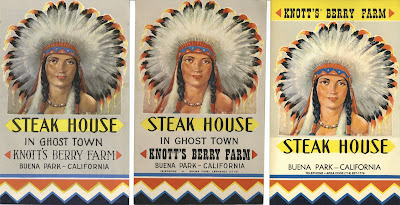 Up first is the oldest “Steak House” menu in my collection. It’s not dated, but I would place it around 1955, anyone know for certain? 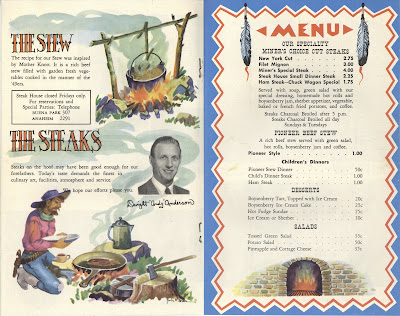 Next I would place this at 1957 judging by the “Dinners served” totals running thru 1956. It’s interesting to note those are “grand totals” as the same numbers appear in the Chicken Dinner Menu. 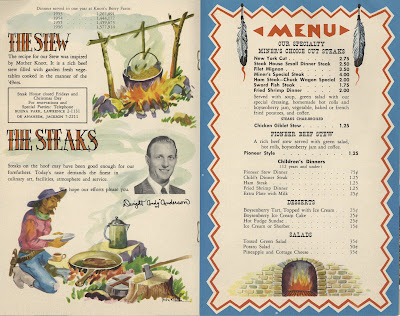 1958 brings a couple small price increases, but most noteworthy is the addition of “Buffalo” to the menu! Check out down at the bottom of this post and you will find a complete “Buffalo Steak” menu. Was this just an off-shoot of the “Steak House”? 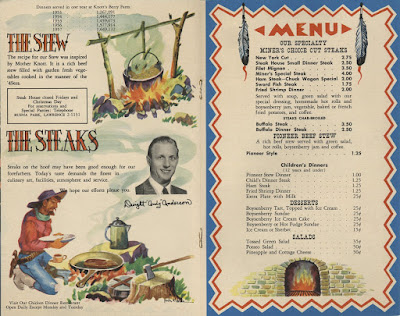 Now from 1965 (what a great year!) no more Buffalo meat, but we’ve got some hand written price increases and Sauté Chicken Livers for $2.50! I think I just lost my appetite, wait, a boysenberry tart topped with ice cream for a quarter! OK, I’m hungry again. Wow, Dwight "Andy" Anderson looks like he has eaten a few of those steaks over the years, is that even the same guy? 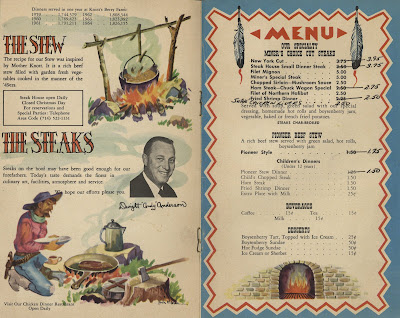 The last menu has no year served totals and is just a true “menu” with just four pages including the covers. I would place it around 1970, but that’s just a guess. 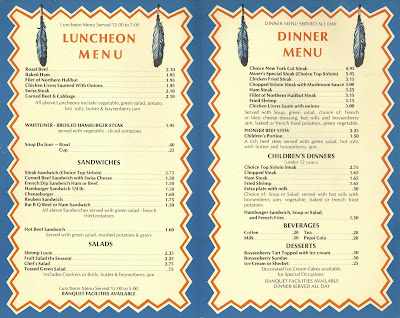 Here is the back of the oldest Steak House menu and the only menu/brochure to actually shows the inside of the place. That General Merchandise Store sure looks fun too, is that Sam Drucker behind the counter? 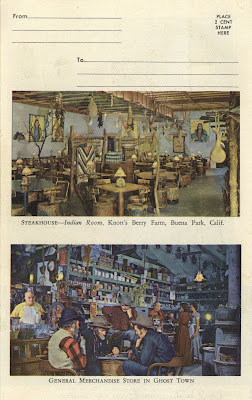 Lastly, here is the Buffalo Steak Menu. It appears to be part of the Steak House. Has anyone had buffalo meat? Is it any good? Do they still sell it anywhere? Is it even legal? 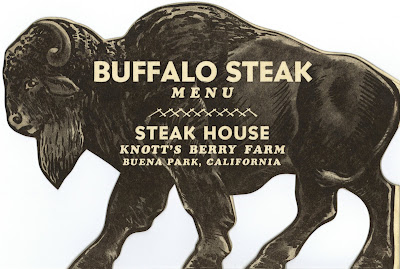 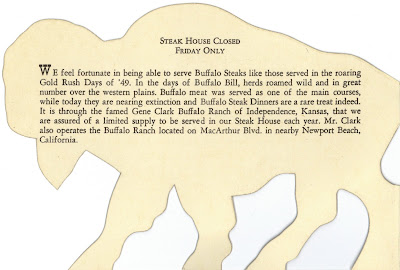 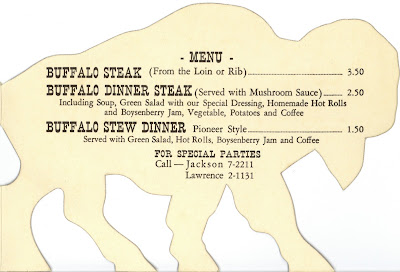 Check back next Monday for yet another vintage Knott's Map! Come back tomorrow for some Disneyland stuff... Oh, and come back on Bonus Sunday for a few complete scans of the menus.

Great post Tim. I am starving. Yes, buffalo meat is awesome. It is the best steak you will ever eat. Very lean and tender. I gotta go eat!

The livers are the only part of the chicken that I actually like! As for the boysenberry tart – how have I gotten this far in life without it?!

Both the Steakhouse, and the Grill opened in September of 1946. Initially, Paul von Klieben had plans for a highly themed "Covered Wagon Room" and a "Gold Miner's Room", in addition to the Indian Room, but those never made it off the drawing board.

By June of 1952, the Garden and Family rooms opened in their stead.

In February of 1999, the Steak House was painted bright yellow and redesigned to become "Auntie Pasta's Pizza Palace."

I thought I'd clear up the Andy Anderson issue. There were two separate Andy Andersons. One was the woodcarver who carved many of the figures in Ghost Town, including Sad Eye Joe. The other was the husband of Marion Knott, who managed the Steak House.

Hmmmm - I thought the Steak House remained open after the renaming as Big Jake's - but I am not certain of that... Sadly, I never went in there during that time. Anyone want to check their post-83 maps to see?

I just did some surfing and found this map from 1997:

I've also heard the Grill is not long for this world, which would be sad...

I don't know where you find your stuff...but keeping finding and sharing it!

How did I miss this yesterday? Very neat collection!

WOW, a virtual plethora of information! Thanks Chris and Chris! Anyone else hungry for a Steak? Fire up the time machine and meet me and Viewliner at the Steak House!

Hey Tim - The earliest Steak House menu has an outstanding illustration of Geronimo on the cover. Do you have that one?
If not, let me know. I've probably got dozens around here. Or perhaps I could just post it for you. What's your wish?

What a blast from the past! I worked as a waitress at the Steak House from 1967 to 1969. It was insane, but the tips were to die for, & I was able to go to Hawaii on a trip from the great tips I got. I remember the room that is in the picture, plus the "banquet room" that they had. I learned to eat beef medium, rather than well done, & getting to eat the great food for our meal was wonderful. The halibut with au gratin potatoes was my favorite.

Thank you for the memories, even if I found this 2 years later, LOL.

After I have seen all the comments, I am not sure if the STEAK HOUSE, still exists! Does anyone know for sure? I haven't been to Knotts Berry farm, in about 20 years! I loved that place, also the Chicken dinner restaurant was GREAT!!!