Fortnight revisited, November 1954 - Before the attitude....

When we previously visited the “Fortnight” Magazine, it was in August 1955 and they had quite the attitude about the newly opened Disneyland. Some readers described the tone as “Snooty, "Snarky" and even more "Stick-up-their-butt’y!" You can read the August 1955 issue here (link) and decide for yourself.

This issue of "Fortnight", from November 17, 1954, had a much better attitude about “Mickey Mouse’s Fabulous New Playground”. 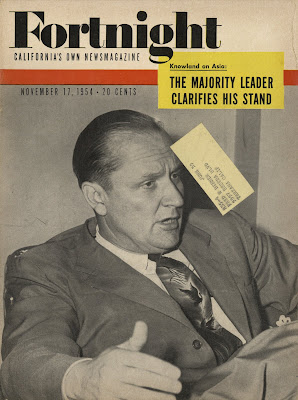 Interesting how each realm is a “Land” of its own; Adventure Land, Tomorrow Land, etc. “Pirates” in Frontier Land, it will never happen. 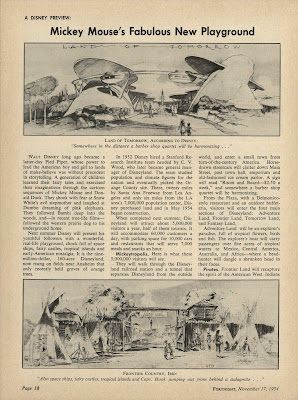 “A Paddle Wheel river boat (capacity of 300)” HEY, I thought they didn’t figure out the “capacity” until after the park opened and the Mark Twain almost capsized?

“Passengers can identify the places they are passing; Mt. Vernon, New Orleans, Mobile.”? “Drink root beer at Paul Bunyan’s Bar”? Looks like there were some changes to the plan after this was written. 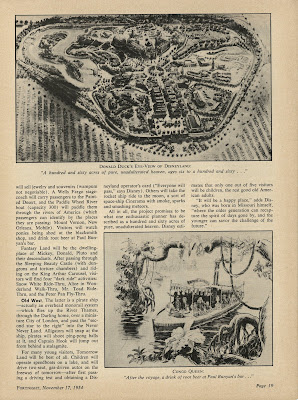 And for some color, here’s a great ad for Old Sunny Brook Brand whisky. Yup, those guys look just like me and my friends when we go camping: coffee, whiskey, a large ax and fishing poles, ah the good life. 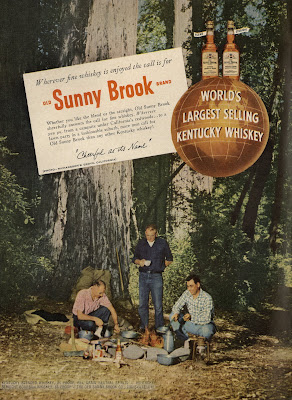 Being 9/11, I decided not to work today, I work in a high-rise building and frankly, it’s just somewhere I’d rather not be today. So “I’m going to Disneyland”, and while I will be having a nice time, I will say a prayer for all those fellow country men and women who lost the lives or loved ones on 9/11. I hope you will do the same.
Posted by Vintage Disneyland Tickets at 12:04 AM